How the brown sand bonanza impacts US shale plays

The frac sand industry is in a transition phase, seeing the emergence of regional Texas mines potentially becoming more and more important over the next 12 to 18 months. With around 60 million tons of new supply expected to come online in Texas from 2017 to 2018 through new greenfield mines and brownfield mine expansions, there could be a scenario wherein the Permian will start sourcing the majority of its sand from regional mines rather than those in the Upper Midwest. This will result in a fundamental shift in how the frac sand sector operates, as the Permian, along with the Eagle Ford now account for about 60% of total US frac sand demand.

The Midwest mines, primarily located in the states of Wisconsin, Minnesota and Illinois currently account for around two-thirds of total US frac sand supply and produce northern white sand (NWS). Typically, the majority of frac sand consumed in the various US shale plays has been sourced from the Midwest and transported via rail to the different plays. The emergence of new supply in Texas could cause the Permian to be self-sustainable, thus causing an oversupply of NWS. We are predicting a decline in NWS prices next year due to this expected supply change. This will bode well for operators in the Bakken, Marcellus and other plays that use NWS, as it would lower their overall well costs, and thus improve their break-evens. 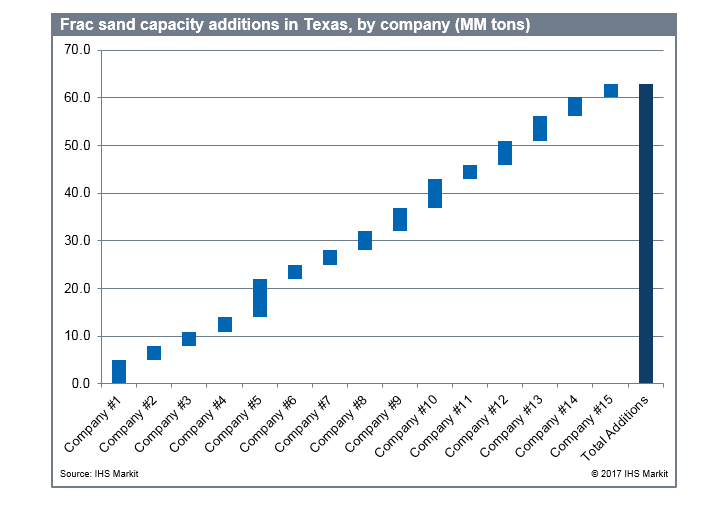 The majority of new supply in Texas is coming from new "in-basin" mines located between the Delaware and Midland basins. Frac sand produced from the in-basin mines is different from the typical "brown sand" that Texas has been known for. Frac sand produced from the in-basin mines is sourced from sand dunes rather than from formations beneath the Earth's surface that require mining. Due to greater ease of access, and lower transportation costs created by not needing to ship anything by rail, NWS will not be able to compete with local sand from a pure cost perspective. As a result, the only scenario in which we foresee a shift back to NWS is one where quality or operational preference dictates the change. As yet, there is very little data to quantify the effect of usage of in-basin sands on well productivity, estimated ultimate recovery and initial production rates. Hence significant long-term adoption risks do exist in spite of frac sand suppliers investing heavily in in-basin supply capacity.

We expect Permian and Eagle Ford frac sand demand to total 33 million tons and 18 million tons, respectively, in 2018. Existing sand supply in Texas is estimated at 20 to 25 million tons. With an additional 60 million tons of new supply expected to come online from 2017 to 2018, the frac sand sector could be oversupplied, and not all new mines could find an easy market in 2018 and 2019.

Learn more about our cost and technology solutions for the oil and gas industry.