In 2019, UAVs became the primary long-range weapon used by the Houthi movement in attack operations against Saudi and Yemeni forces and infrastructure. Of all identified Houthi attacks between January and October 2019, 68% were conducted using attack UAVs, whereas 32% were carried out with ballistic missiles, a significant shift compared with previous years. The Houthis have demonstrated that their UAV technology has greatly improved since the weapons were first introduced to their military arsenal. No other known non-state armed group (NSAG) across the MENA region and beyond has demonstrated the same level of UAV technological sophistication. Three quarters of recorded Houthi UAV and ballistic missile attacks since 2015 have been directed at Saudi territory, whereas 24.5% were mounted against targets in Yemen and 0.5% against targets in the United Arab Emirates. 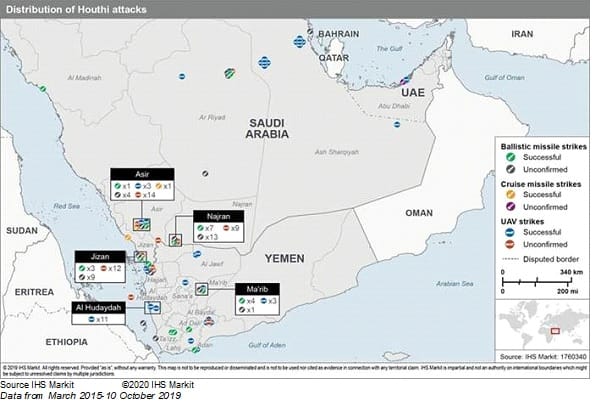 We assess that the increasing use of UAVs in Houthi attack operations is likely to be due to their higher success rate compared with ballistic missiles; this is expected to sustain Houthi commitment to maintaining and improving UAV capability. The Houthis are highly likely to further increase investment in human and technological resources to develop their UAV capabilities and to deploy attack UAVs against strategic targets, especially military, energy and aviation assets, in Saudi Arabia and the UAE, as well as on the battlefield in Yemen, and they are likely to receive greater Iranian support to refine and improve their UAV technology.

Barring a general ceasefire agreement between the Houthi movement and Saudi Arabia, and a full UAE withdrawal from Yemen, which we assess to be unlikely in the six-month outlook, and as long as the Saudi air campaign in Yemen continues, the Houthis are likely to continue UAV attacks against targets in Yemeni and Saudi, and, in the near future, UAE territory at varying frequencies. The Houthis have demonstrated that their UAV technology has greatly improved since the weapons were first introduced to their military arsenal. No other known non-state armed group (NSAG) across the MENA region and beyond has demonstrated the same level of UAV technological sophistication. Moreover, the Houthi's rapid adoption and improvement of this technology, almost certainly with Iranian assistance, is a strong indicator that Iran can transfer similar capabilities to some Shia militias in Iraq and to Hizbullah in Lebanon.

Considering the Houthis' intent to target commercially relevant assets in Saudi and UAE territory, the increasing sophistication of their UAVs, and Saudi Arabia's inability to intercept all Houthi UAVs entering their airspace, targets are likely to face structural damage, potential loss of life and lead to the suspension of air and energy operations. The Houthis will also continue to be able to shift and expand their target set according to their strategic priorities, as they have done in the past. Given the fact that the current 1,500-km range of Houthi UAVs encompasses most of Saudi and Emirati territory, a large set of military and commercial assets will be potential targets for the movement.

RT @ChrisMegerian: President Biden said “today’s announcement has the potential to be a game changer.” But his power over the global suppl…

Fed to begin increasing interest rates in March 2023 and end asset purchases in June 2022. With these developments… https://t.co/WQ06CAd08P