The Ansar Allah (Houthi movement) claimed several attacks across Saudi Arabia on 28 February. The Houthi claimed that a ballistic missile (likely a domestically produced Zulfiqar missile) was launched at Riyadh, with a further nine weaponised unmanned aerial vehicles (UAVs) at "sensitive targets" in Riyadh and six weaponised UAVs at military targets in Abha, Khamis Mushait, and Jizan province. The Saudi military said that one missile and three weaponised UAVs had been used in the attacks.

No Saudi casualties were reported from the attacks and Saudi media claimed that the ballistic missile fired at Riyadh was intercepted by Patriot missile air defence batteries; this appears to be consistent with video images published on social media of the interception. Saudi media later published images of the missile debris that had caused significant impact damage to a house in Riyadh, and flights into King Khalid International Airport were delayed for several hours after the interception. The attacks are consistent with the two key drivers of conflict escalation between Saudi Arabia and the Houthi: Houthi attempts to pressure Saudi into reducing its role in the Yemeni civil war and, as an ally of Iran, to target allies of the United States in the Gulf in the lead up to a proposed renegotiated nuclear deal. Houthi cross-border attacks into Saudi Arabia targeting aviation assets and maritime attacks are likely to intensify, as long as the movement and the coalition do not resume formal peace negotiations or reach an agreement for a general ceasefire, which IHS Markit assesses as unlikely. 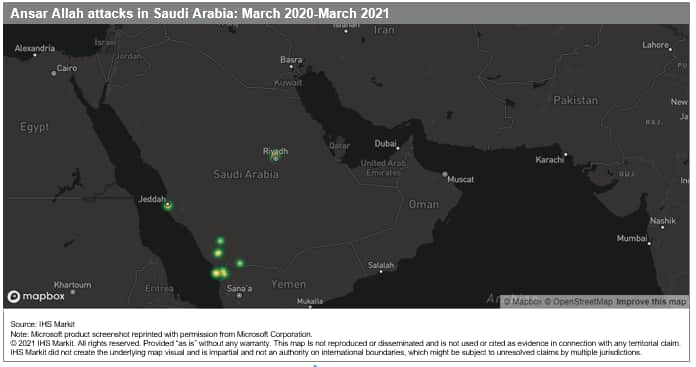 Houthi attacks are likely to increase in range and target set, posing damage risks to assets in the wider Gulf. The attacks on Riyadh coincided with Saudi Arabia hosting the Formula E tournament, an indicator that the Houthi are increasingly likely to launch strikes against additional prestige events held in the kingdom. The Houthi claimed to have used Samad-3 and Qassef-2K UAVs in the attacks on Abha and Khamis Mushait. The Samad-3 can be equipped with explosives and has a range of 1,500 km, enabling the Houthis to engage a large set of targets in Saudi and also UAE territory, while the Qassef-2K has a shorter range (300 km) but can be equipped with a heavy high-explosive fragmentation warhead that can be detonated 20 m above a target, releasing shrapnel. Reporting in international media that the Houthi have been building up stockpiles of more advanced UAVs, including the Shahed-136 loitering munition, are credible, suggesting that the increasing frequency of Houthi attacks on Saudi Arabia is likely to continue and is probably being adopted as a more permanent strategy, particularly while the Houthi are widening their offensive against Ma'rib.

The Houthi are less likely to directly target assets in Bahrain but missile and UAV attacks on the United Arab Emirates are increasingly likely. Given the proximity of the US Fifth Fleet in Manama to Bahrain, the Houthi are likely to avoid targeting the country directly due to fear of US retaliation. However, targets in the UAE are at higher risk given increasingly prominent relations between the UAE and Israel, including the berthing on 28 February of a damaged Israeli-owned vessel in Dubai. Targets are likely to include Abu Dhabi and Dubai International Airports, Jebel Ali Port in Dubai, Al Dhafra Airbase, and any of the event pavilions associated with the rescheduled Dubai Expo 2020 due to be held from October 2021.

Thanks for mentioning our @SPGlobalPMI data! Companies in Dubai end a 12-month stretch of discounting as cost pres… https://t.co/O2nh2G9qKE