Optimism is making a comeback among North Sea drilling contractors, according to the April edition of S&P Global's North Sea Rig Report. There is finally some recognition by UK Government of the need to support domestic hydrocarbons production as part of the energy transition, given added importance by the aim of reducing imports from Russia.

Earlier in this month, the UK government announced in its Energy Security Strategy that it will support the production of domestic oil and gas in the near term while accelerating the deployment of wind, new nuclear, solar, and hydrogen to boost the country's long-term energy independence. It aims to establish a new taskforce to support new developments, "…recognising the importance of these fuels to the transition and to our energy security, and that producing gas in the UK has a lower carbon footprint than imported from abroad".

In the same week more optimism was generated concerning the future of the troubled Cambo project, the largest opportunity in the United Kingdom for a deepwater harsh-environment semi. Ithaca Energy has agreed to acquire Cambo operator Siccar Point Energy (SPE) for an upfront payment of USD 1.1 billion and contingent payments worth USD 360 million. The transaction will include interests in the west of Shetland Cambo, Rosebank, and Schiehallion fields. In addition in March 2022, SPE and joint venture partner Shell were awarded a two-year licence extension for the Cambo field from the UK North Sea Transition Authority (NSTA). This followed news of a rethink from Shell regarding the field's potential development.

This good news for the West of Shetland sector follows market activity from two other major players that are looking to conduct drilling in the region, with development drilling programmes commencing in 2023 and 2025, and at least one exploration campaign likely in 2023. Positive movements on all these programmes could add up to continuous work for at least one sixth-generation harsh-environment unit from early 2023 until early 2027.

West of Shetland has long been identified as one of the United Kingdom's least developed sectors with a high level of untapped resources - it has provided a stable market for high-specification semis for a number of years. The table below shows annual average rig demand in the area compared to the UK as a whole, and the percentage of the UK floater market that the West of Shetland has comprised since 2010.

The segment was of particular importance between 2012 and 2019, when it provided a minumum of 14.4% of contracted rig time in the floater fleet, rising to a high of 27.5% in 2019. This latter figure was, however, at a time when the average number of semis on contract over the entire United Kingdom was only 11.6, compared with a high of over 21 in 2013. But generally between 2012 and 2019 the sector provided work for an average of two to three semis per year. Although Stena Carron worked Chevron and BP between October 2010 and February 2014, and West Navigator for DONG between September 2012 and February 2013, all other rig demand has been filled by semis, whose motion characeteristics are more suited to the region's harsh weather and sea states. 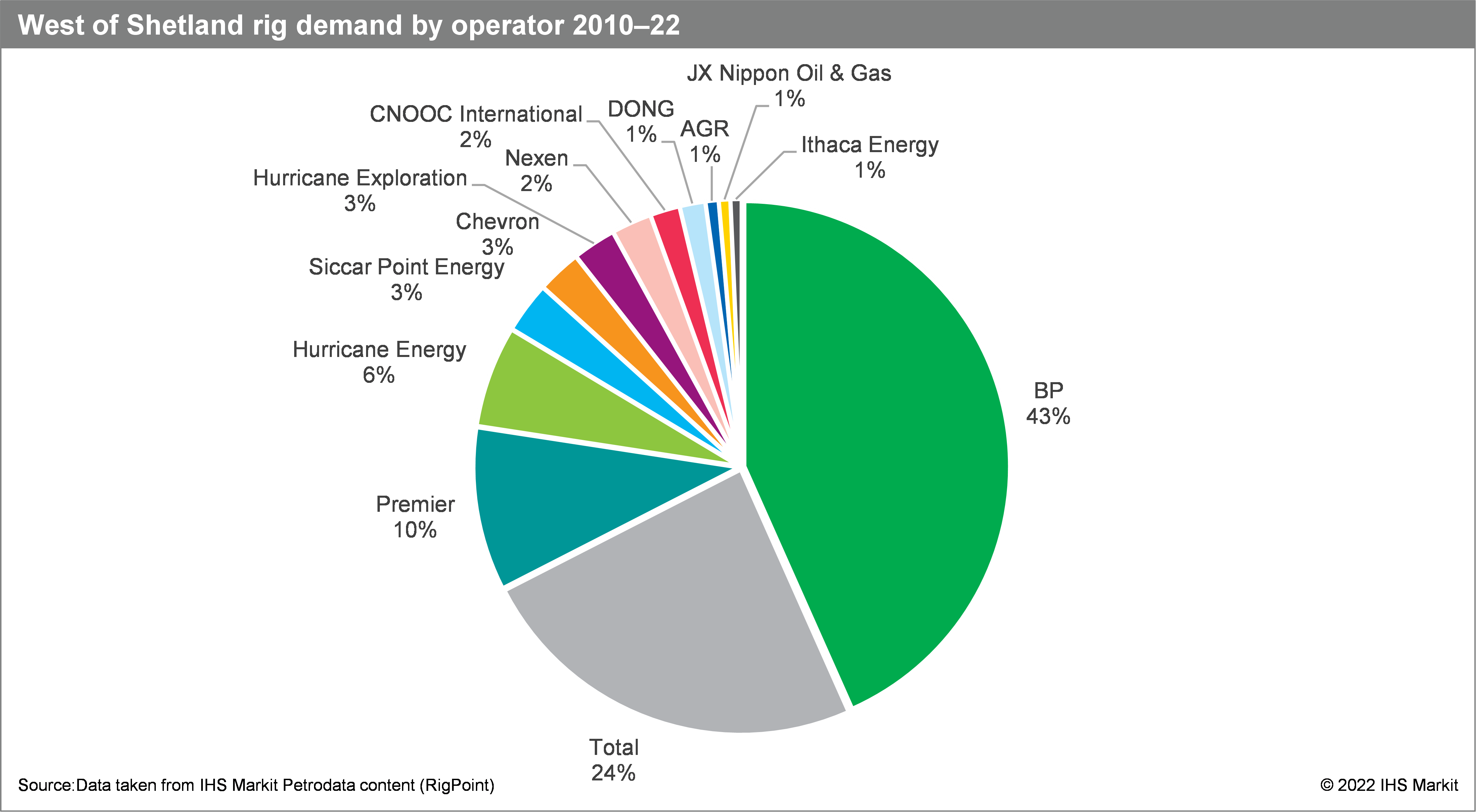 The chart above shows how West of Shetland demand has been split by operators over the period. Over three quarters of rig time has been shared between three operators. BP (43%) operated Deepsea Aberdeen in its Quad 204 redevelopment programme between 2014 and 2021, and also used Paul B. Loyd, Jr. extensively. Total/Total Energies has had 24% of rig time, and Premier Oil used standard semi WilPhoenix and fourth-generation deepwater unit Ocean Valiant extensively on its Solan field development. The remaining 23% of rig time was spent between nine operators. 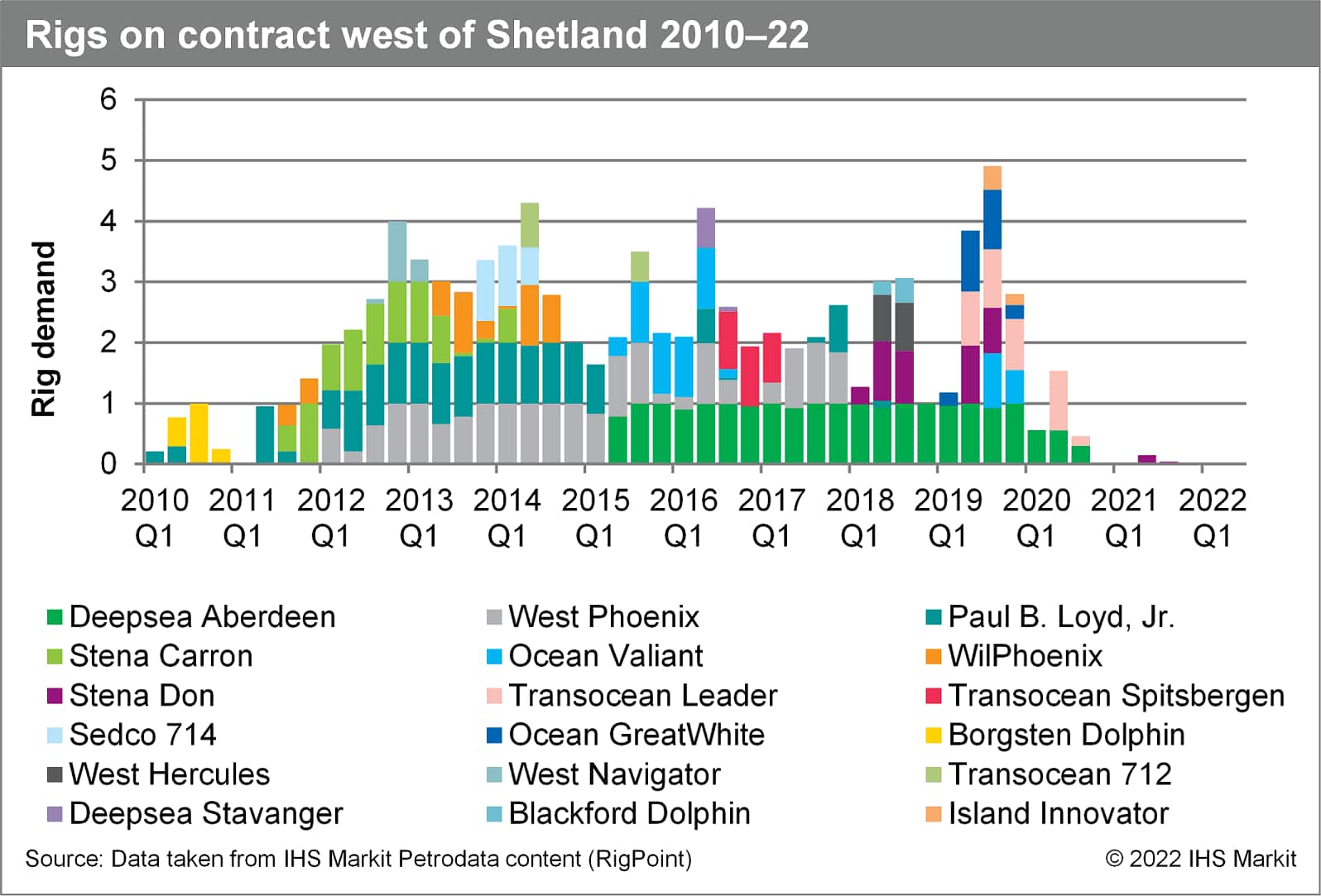 It is also interesting to look at the rigs that have worked West of Shetland since 2010. Five units have since been scrapped or are cold stacked - Transocean 712, West Navigator, Borgsten Dolphin, Ocean Valiant, and Transocean Leader. Others such as Deepsea Aberdeen, DeepseaStavanger, and Transocean Spitsbergen are potentially committed off Norway for some time to come.

Operators also have a clear preference for using sixth-generation units, many of which are now in Norway. Competition for such units is set to tighten as Norway's development rush gets underway in 2024-25 and projects in Eastern Canada and South Africa will use the same pool of rigs.

The UK resident deepwater sixth-generation fleet is now non-existent and units are being offered on West of Shetland work from Norway but also as far afield as China and the Canary Islands. After a couple of years of stagnation, it looks as though the West of Shetland could once again be a place of significant interest for drilling contractors.

North Sea Rig Report, is the only monthly publication dedicated solely to coverage of Northwest Europe's offshore rig market. It is also available through subscription to S&P Global's revamped Petrodata Rigs platform, the most comprehensive source for information on the global offshore rig market, offering in-depth knowledge of supply and demand since 1984.