Official GDP data showed the Hong Kong economy contracted at its sharpest rate since 2009 in the third quarter, as signalled well in advance by PMI data.

With trade war tensions and political unrest showing no signs of easing, risks are skewed towards the weakening economic trend continuing into the final quarter of 2019. October's update to PMI data next week will provide the earliest insight into economic activity at the start of the fourth quarter.

Advance estimates from the Census and Statistics department showed gross domestic product (GDP) falling by 2.9% during the third quarter from a year ago, dropping 3.2% compared to the second quarter. The annual decline was the steepest since the second quarter of 2009 and near to the PMI-implied rate of contraction of just over 3%. 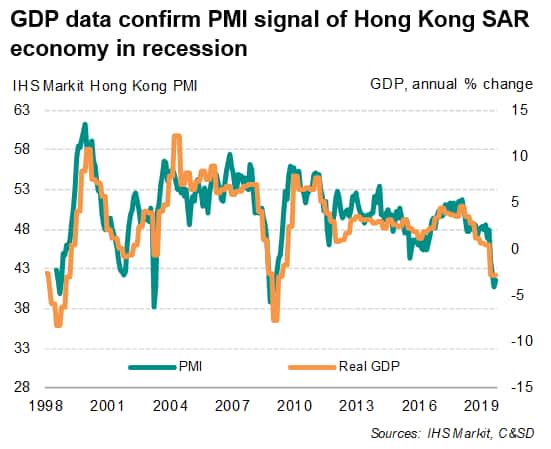 The PMI moved below 50, signalling contracting economic activity, back in April 2018, but fell sharply lower at the start of the third quarter of this year. In July of this year the PMI hit its lowest since March 2009 and has since fallen further into negative territory.

Some recent notes exploring the causes of the severe downturn have been explored in recent research notes:

The PMI message is corroborated by the latest GDP report, with the economic decline reflecting weaknesses in both domestic and foreign demand. Private consumption fell at an annual rate of 3.5%, but the biggest drag came from a 16.3% slump in fixed capital investment, reflecting the sharp deterioration of business confidence given the escalation in political protests.

On the external front, goods exports saw an increased rate of decline in the third quarter amid a global slackening of manufacturing and trading activities. However, exports of services, which include travel and business services, recorded the largest decrease (in annual terms) since the SARS epidemic in the second quarter of 2003.

The Hong Kong SAR government now expects to see a contraction of the economy this year, as softening global growth and the adverse impact of large-scale protests are set to continue dampening economic activity in the Special Administrative Region.

Looking ahead, September's survey data saw businesses' expectations of their output in a year's time sink to the lowest since data for this variable were first available in early-2012. Even if there is an alleviation of the local political situation, the global slowdown and ongoing trade conflicts suggest that Hong Kong economic growth will likely remain under pressure in the months ahead.

Businesses and investors will watch out for the October update to the IHS Markit Hong Kong SAR PMI survey, which is released next Tuesday, 5th November.