Hong Kong PMI signals worst downturn for over a decade in July amid trade wars, protests

The start of the third quarter saw Hong Kong's private sector stuck in the worst downturn since the heights of the global financial crisis over a decade ago, according to the latest PMI survey results. A deepening US-China trade war and an escalation in large-scale protests across Hong Kong reportedly dampened business activity.

With scant signs that neither the trade war tensions nor the unsettled domestic political situation is letting up any time soon, firms became increasingly pessimistic about the business outlook, suggesting that the Hong Kong economy is likely to remain under pressure in coming months. 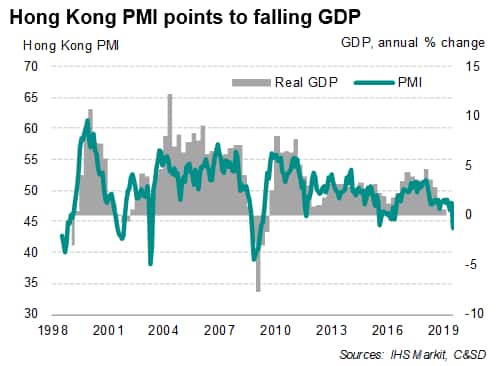 The IHS Markit Hong Kong PMI™ sank to 43.8 in July, down from 47.9 in June, signalling the steepest deterioration in private sector conditions since March 2009.

Latest survey data are now broadly indicative of the economy contracting at an annual rate of around 2.0%, suggesting that Hong Kong could be heading into a recession in the second half of the year if the economic headwinds persist in coming months.

The rate of decline in both new orders and business activity was the steepest for over a decade in July, reflecting worsening demand conditions brought on by the adverse impact of an ongoing US-China trade war and recent large-scale local demonstrations. Notably, export orders to mainland China fell at the sharpest pace for nearly four years.

Facing reduced demand and increasing headwinds to the business outlook, firms were reluctant to build inventories. Instead they continued to cut back on purchasing activity, preferring to tap into existing inventories to meeting current output requirements. 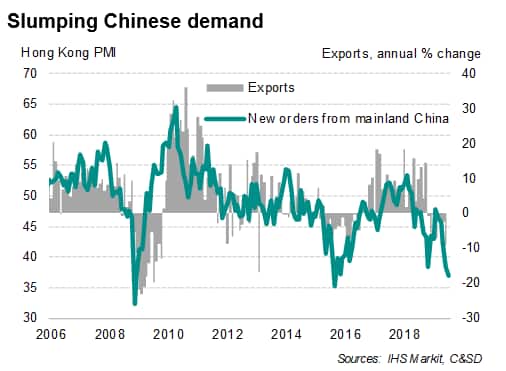 In a sign of rising global uncertainty, the July survey found evidence of Hong Kong firms becoming increasingly pessimistic about output in the year ahead, with the Business Expectations Index, the survey's only sentiment-based gauge of confidence, falling to the lowest for three-and-a-half years.

While the negative sentiment seen in Hong Kong's private sector is in line with the downbeat outlook for global business (as indicated by the latest IHS Markit Business Outlook survey) amid growing anxiety about increasing protectionism, the escalation in local political protests has also dampened the overall mood. Anecdotal evidence revealed that rising political uncertainty relating to the large-scale demonstrations was highlighted as a key concern for Hong Kong businesses. Moreover, an extended period of widespread protests will also affect consumption and tourism. 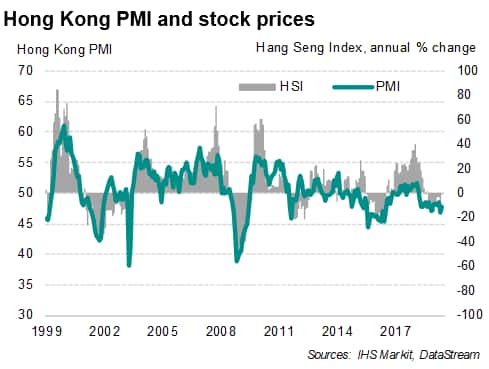 Slowing economic growth and local protests have weighed on Hong Kong equities in recent months. Following the 28th April demonstration, the Hang Seng Index lost 11% over the course of May. With the PMI data exhibiting a near 80% correlation with the Hang Seng Index (annual growth terms), the July survey suggests that the recent recovery in Hong Kong stocks is likely to be short-lived, especially if the political situation continues in coming months.