Indonesia is a major supplier of nickel ores and concentrates to the global market, accounting for 27% of global mined production in 2018. The Indonesian government initially implemented a ban on unprocessed ore exports in 2014 to incentivize investment in local processing capacity. While a significant amount of refining capacity, primarily financed by Chinese investors, has been built in Indonesia since 2014, China remains the largest source of refined nickel. 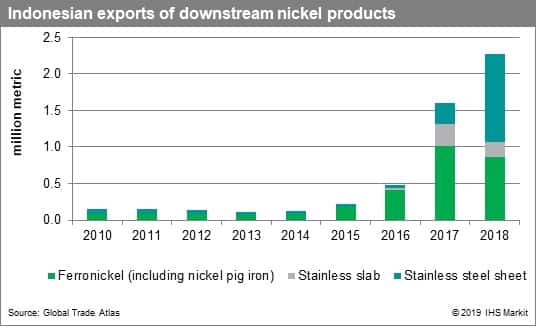 Given the two-month run-up in prices during July and August over speculation around the Indonesian export ban, our view is the disruption to supply has already been priced-in with little upside risk at this point. Weak demand growth across all major markets along with elevated stainless steel inventories will also act as a headwind.

Bottom line: IHS Markit anticipates the LME nickel price will move moderately lower over the near term once the short covering is completed. We view $15,400/metric ton as a new floor for LME nickel prices and forecast prices to move back down toward this level by year-end.