NPLs are trending downwards, but not fast enough

Greek banks have been moderately successful in cutting their bad loan exposures over the last three years. In nominal terms, NPLs have declined by around EUR30 billion, almost a third, due to a combination of sales and write-offs. More stable economic conditions have also supported banks' NPL reduction efforts. However, at 42.6% at the end of the second quarter of 2019, Greek banks' NPL ratio is still by far the highest in the EU (see Chart 1). More than half of the EUR75 billion of Greek NPL exposures are in the business sector, while residential loans account for one-third of the total (see Chart 2). 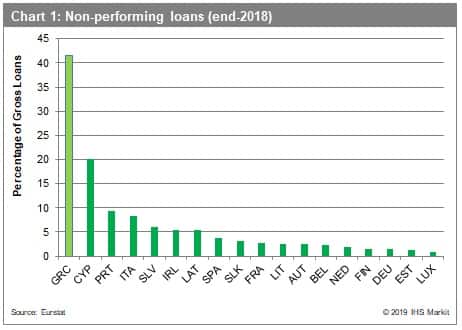 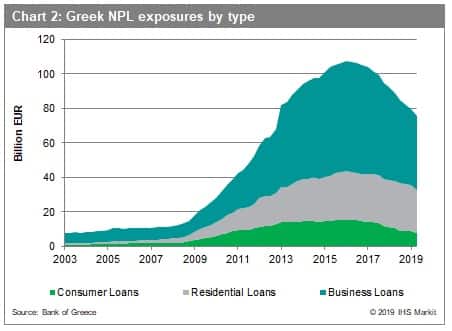 Towards a systemic solution: Greece's GACS

Greece's government plan, which was devised the country's bank rescue fund, the Hellenic Financial Stability Fund (HFSF), propose an asset protection scheme based on the Italian GACS. Under the scheme, dubbed the Hercules Asset Protection Scheme (HAPS), banks will transfer around EUR30 billion of NPL exposures to an SPV. The SPV will then securitize these loans and sell notes to investors. The Hellenic state will guarantee the senior tranches, which will be rated by an independent rating agency. The state guarantees will account for EUR9 billion, 4.8% of nominal GDP. These guarantees will only be triggered if more than half of the non-guaranteed tranches (mezzanine/junior) have been sold to private investors.

Bank will pay fees in return for the guarantees. They will be calculated taking Greek credit default swap (CDS) spreads as a reference; these have declined significantly since peaking in 2015 (see Chart 3). The fees will take into account the level and duration of the guarantees, meaning that they will increase as the state's exposure also increases. 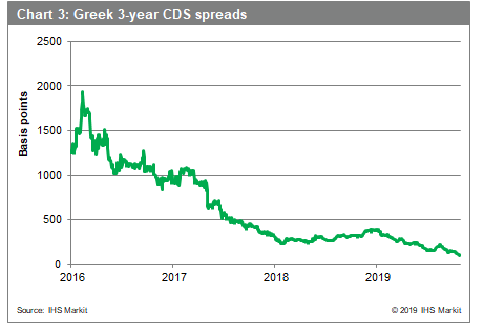 A key factor still to be decided is the capital treatment of the state guarantees. Banks have expressed their strong preference that the state guarantees be rated as zero risk-weighted assets, meaning that they would not have to set aside additional regulatory capital. If this is not the case, participation in the scheme may become too costly, lowering the incentive for banks to take part.

The scheme has already been given the green light by the European Commission, which in mid-October ruled that the guarantees did not constitute illegal state aid, and the Greek parliament is expected to vote on it in early November. The scheme is expected to be in place before the end of this year and to run for 18 months. Participation in the HAPS is voluntary, but all four systemic Greek banks are expected to take part in it.

Demand for Greek NPLs is likely to be sustained by a combination of factors. Investors' appetite for yield has been boosted by historically low interest rates, not only in the eurozone but also at a global level. A more established economic recovery should also help to make NPLs more attractive to investors. There are also signs of stabilization in the property market, with the Bank of Greece reporting that house prices have been on a clear upward trend since the start of 2018 despite prices remaining almost 40% below their peak (see Chart 4). 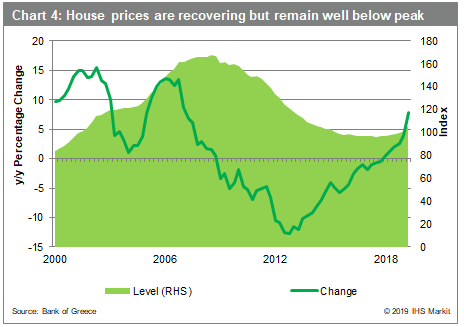 However, there are also reasons to be cautious. There is still some way to go before Greece's legal framework can be deemed to offer a balanced approach between protecting borrowers and allowing an effective resolution of NPLs. In particular, the judicial system is still slow and costly, leading to large backlogs and delays, which are exacerbated by a complex and inflexible insolvency regime. As mentioned above, an unfavorable capital treatment of the state guarantees may also lead to banks deciding that it is too costly to take part in the scheme.

A relapse in the economic recovery could also work against banks' efforts to improve their asset quality. Although we expect the economy to continue its recovery in 2020 and 2021, we are less upbeat than the government and estimate that risks to our forecasts are on the downside given the increasingly challenging external environment. A more uncertain global environment could also lead to a decrease in appetite for risky assets among international investors. A reversal of the downward trend in CDS rates could also lead to higher costs for banks and reduce their incentive to participate in the scheme.

We assess Greece's HAPS to be a positive step in helping banks to normalize their balance sheets. Its ultimate success will be determined by the inter-relation between economic growth and improvements in the regulatory environment. Factors to follow closely include details regarding the capital treatment of the state guarantees, legislative changes such as reforms aimed at improving the efficiency of insolvency laws and the judicial system in general, and asset price developments.

Looking internationally for new growth and expansion opportunities.? We can help: -- Assess and benchmark opportuni… https://t.co/K3rYqJwPaH