The latest KPMG and REC Report on Jobs, compiled by IHS Markit, indicates that heightened uncertainty towards the outlook led companies to delay or cancel plans to hire staff at the end of the first quarter. The number of people placed into permanent roles showed the largest monthly fall since July 2016 during March. At the same time, recruiters pointed to weaker increases in job vacancies and slower pay growth. 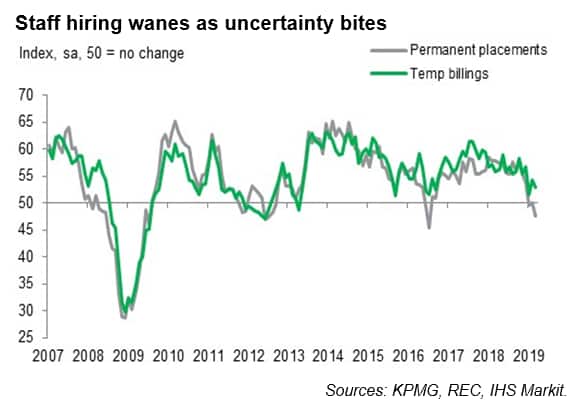 The recruitment survey adds to signs from the latest UK PMI surveys that a lack of clarity over the UK's exit from the EU is weighing on UK business activity and the labour market, which will concern policymakers who are navigating increasingly choppy waters.

The Report on Jobs survey, which monitors over 400 recruitment consultancies across the UK, provides a useful guide to labour market trends, having pointed to steep increases in employment and stronger pay growth well in advance of official data in recent years.

The latest available official data from the ONS showed the unemployment rate edging down to just 3.9% in the three months to January, falling below 4.0% for the first time since 1975. However, the more up to date survey results show that conditions have since deteriorated across the labour market due to intensifying political and economic uncertainty centered on the UK's departure from the EU. 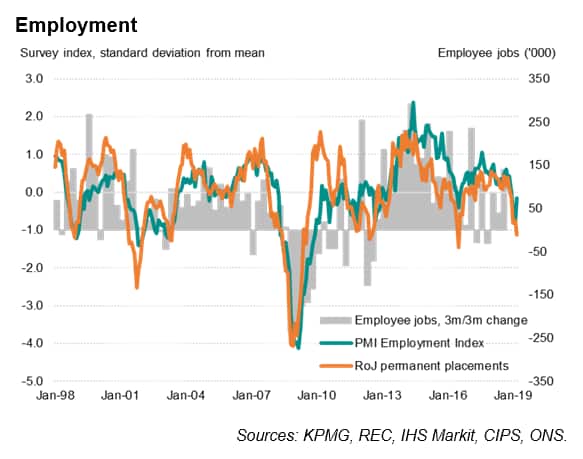 While low unemployment and ensuing staff shortages were frequently cited as having held back recruitment in late 2018 and early 2019, the latest survey indicates that Brexit-related uncertainty was the biggest driver of reduced recruitment activity in March, as well as being a key factor behind a slowing in demand for temps and contract workers so far this year. 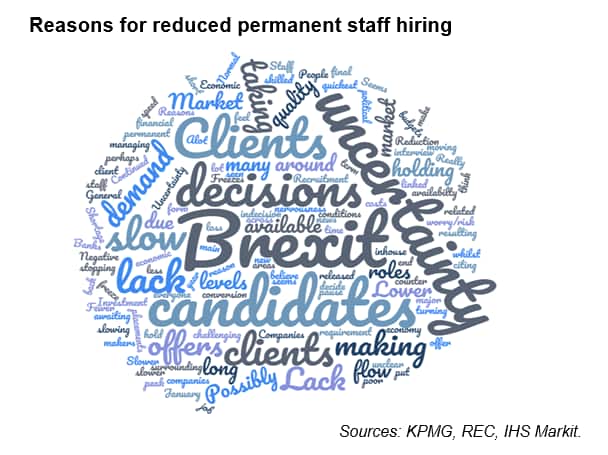 Although the survey data pointed to a further increase in overall job vacancies during March, the rate of increase was the slowest recorded since mid-2016. Furthermore, the vast majority of sectors monitored by the survey have seen much weaker rises in demand for staff through 2019 to date compared to last year, including areas from IT & Computing to Hotels & Catering. 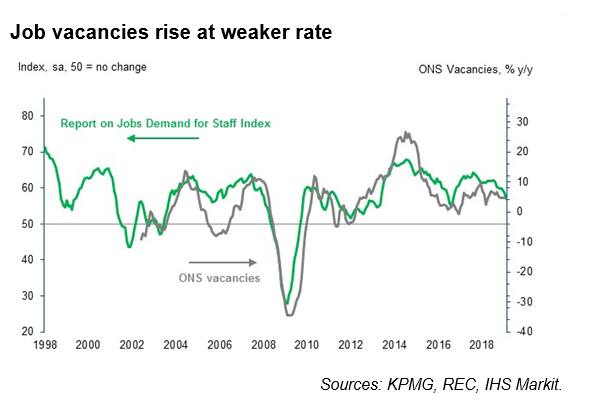 A slowdown in worker demand occurred alongside weaker increases in both starting salaries and temporary wages. Notably, the respective indices fell to 23- and 24-month lows in March, though still point to relatively robust pay growth overall of just over 3%.

The survey's pay measures had strengthened markedly last year as increasingly tight labour market conditions placed upward pressure on wages and salaries. The improved pay trends were also captured by ONS earnings data. Average weekly earnings (excluding bonuses) rose by 3.4% in the three months to January, to sustain the strongest period of pay growth for a decade. However, historical comparisons of the Report on Jobs data show that pay growth may have slipped closer to 3% in recent months. 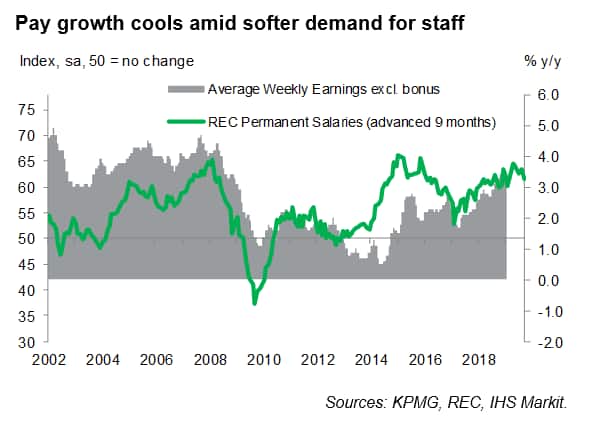 It seems unlikely that business confidence, and therefore hiring plans, will recover unless a clearer path to Brexit becomes apparent. The next days and weeks will be watched carefully to see what strategy emerges to help resolve the current impasse. In the meantime, the survey data suggest that the hitherto surprisingly robust official labour market data could soon start to weaken.