Strategies to electrify heating and driving in New England will raise demand for power during this decade, but will not put the regional grid at risk of shortages, said the New England Independent System Operator (ISO-NE), which manages planning, the power market, and transmission grid for Connecticut, Maine, Massachusetts, New Hampshire, Rhode Island, and Vermont.

Every New England state has a heat pump incentive program, which offers rebates based on the estimated per-ton CO2 reductions delivered. At the upper end, Massachusetts offers up to $1,500 for the installation of a heat pump, and Maine offers up to $1,200.

A study in 2020 by climate group RMI found "heat pumps ranged from 2.2 to 4.5 times more efficient than an Energy Star gas furnace on an annual basis, and in no climate was a heat pump less than 200% efficient," including in every New England state.

The federal government is touting the benefits of heat pumps too. On 17 May, the White House announced it is developing new Energy Star standards for heat pumps. "If all heat pumps, central air conditioners, and electric water heaters sold in the US met the new Energy Star standards, the energy cost savings would grow to $11 billion a year," and 255 billion lb of annual GHG emissions would be avoided, it said.

Concurrently, the Department of Energy (DOE) announced the Cold Climate Heat Pump Technology Challenge, as part of its Energy, Emissions and Equity Initiative. Atop the list of priorities, according to DOE, is "to develop a new technology specification for a high-performance, cold-climate heat pump, followed by field validation and pilot programs to address installation challenges and expand market demand."

Today, the standards-setting body, the Air-Conditioning, Heating & Refrigeration Institute (AHRI), does not have a test for air source heat pumps below 17 degrees Fahrenheit, even though some commercially available heat pumps can operate effectively at negative temperatures, according to RMI. "This gives little to no indication of how products compare in sub-zero conditions, or even which can operate below zero at all," RMI said. 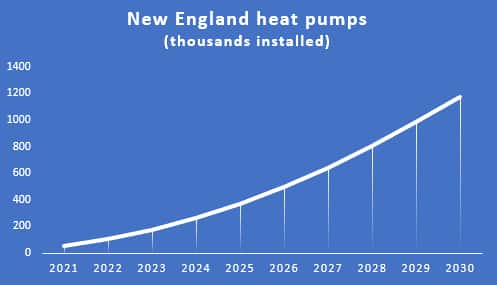 Electric vehicle use to top 1 million

Electric vehicle (EV) purchases also will see rapid growth, induced by falling costs, improving battery range, and state-level incentives to switch away from internal combustion engines (ICE). ISO-NE projects 1.02 million EVs will be on the road in New England by 2030, with nearly half to be purchased in Massachusetts. The new cars will require an additional 3,554 GWh of grid electricity in 2030, or 2.7% of all grid demand. 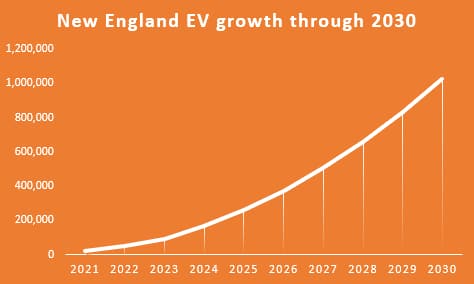 "Fast Transition" is IHS Markit's name for a computer model it launched in 2020 to forecast impacts on the power sector and the economy if the US and Canada increased their commitments to carbon emissions reductions by 2050. Under the Fast Transition scenario, the US power industry would be more than 90% decarbonized (from a 2005 baseline) by 2050. This is in contrast to the "Planning Case" in which the power sector would be 64% decarbonized by 2050.

"The US Northeast is driven by concerns over the continued availability of natural gas, including the difficulty of building new gas pipelines, and the political will to decarbonize. In addition, the Northeast accounts for more than 85% of total US residential heating oil demand. Policy supports electrifying both natural gas and fuel oil heating," the Fast Transition analysis states.

In fact, IHS Markit sees EV demand rising more sharply than ISO-NE's forecast, as it projects that EVs will generate 3,900 GWh of demand by 2030, or about 10% more than the grid operator predicts.

"We are updating our Fast Transition forecast now, and it's likely that the [electrification] numbers will be higher," Maslin said, adding: "On EVs in particular, we see more states not allowing ICE new vehicles sales after 2030 or 2035."

ISO-NE said that the combination of heat pumps and EVs will result in peak winter demand for electricity increasing by nearly 2,500 MW, or more than 12% higher than current peak demand. Under average winter conditions, peak demand in 2030 will reach 25,041 MW in 2030.

The challenge will be keeping the regional power system balanced without additional natural gas pipeline capacity, as adding new pipelines in the region has been held up by permitting issues and lawsuits.

Asked whether ISO New England is pre­pared to handle the newly projected jump in winter peak demand, a spokesman for ISO-NE told The Energy Daily that the new EV and ASHP projections come in time for the grid operator to prepare.

"These forecasts give us the opportunity to see these trends well in advance, and pre­pare the system," he said. "For example, these forecasts eventu­ally feed into our forward capacity market, which procures the capacity needed to meet these peaks," he said, referring to annual capacity auctions in which the grid operator directs utilities to purchase supply commit­ments three years in the future to ensure they can meet projected demand.

For this past winter, ISO New Eng­land projected a peak demand of 20,166 MW and an "extreme winter peak" of 20,806 MW, which assumed temperatures of about minus 2 degrees Fahrenheit. To meet that demand, the grid operator said generators had committed to supply 32,036 MW via capacity contracts, and if all plants pushed their output to maximum levels they could produce roughly another 3,000 MW.

Nevertheless, ISO-NE said in its forecast that about 4,000 MW of gas-fired generation serving the region remains at risk of going offline in the event of supply disruptions similar to the winter storm that froze gas equipment in Texas in February.

Based on reporting by Jeff Beattie, "The Energy Daily."