Has the economic downturn endangered governments' ability to pay for new treatments in Europe?

Over the past few years, the number of new drug approvals has increased significantly. Given the fact that governments are struggling to keep their debt at bay, funding new treatments is increasingly challenging. IHS Life Sciences analysed European governments' ability to fund new and innovative pharmaceuticals.

A sample of 217 pharmaceuticals approved by the European Medicines Agency (EMA) since 2011 and that are still patent-protected was used in order to determine the percentage available and reimbursed in each of the EU countries available in PharmOnline International. Results are presented in the chart below. 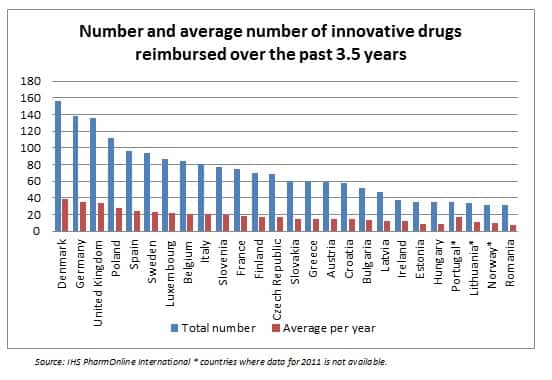 With a minimum of 70 innovative pharmaceuticals reimbursed over the past 3.5 years in 50% of the countries analysed, our data shows that most governments are still in a position to fund new therapies - one way or another. The drug Sovaldi (sofosbuvir) - intended to cure hepatitis C - is a great example. This breakthrough therapy was approved in Europe in January 2014 and while the cost of the treatment is high, around one and a half year later, it is already available and reimbursed in 15 European countries. 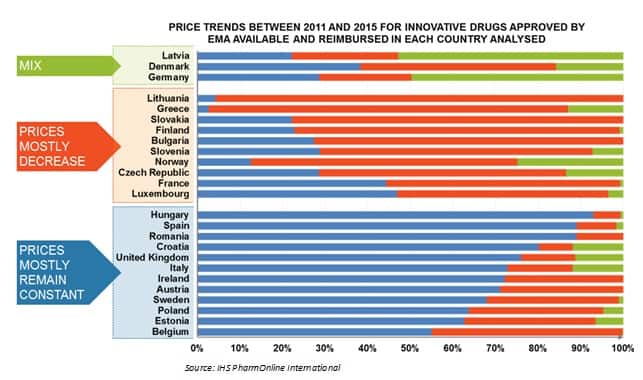 Although prices mostly remain constant in the majority of the markets studied, price cuts still impact the majority of patented innovative drugs in 10 countries. For instance:

Additionally, even in countries where the situation appears to be better, the situation may be more complex than it seems. In Germany, the price increases we see are often attributed to a modification of distribution margins over the course of 2011. However, at the retail level, prices tend to decrease. Furthermore, a large number of drugs that finalized the process of price negotiation under the AMNOG reform have experienced significant price cuts. Other analysis carried out by IHS Life Sciences have shown that price cuts commonly reach two-digit percentages.

This analysis has demonstrated that innovative pharmaceuticals continue to be reimbursed. However, some of the cost-containment policies governments are using to maintain and add drugs to reimbursement lists are: