IHS Markit anticipates that Guyana's deepwater investment climate will remain regionally competitive over the next five years, despite the country's plans to adjust its upstream fiscal regime and to establish a national oil company (NOC). 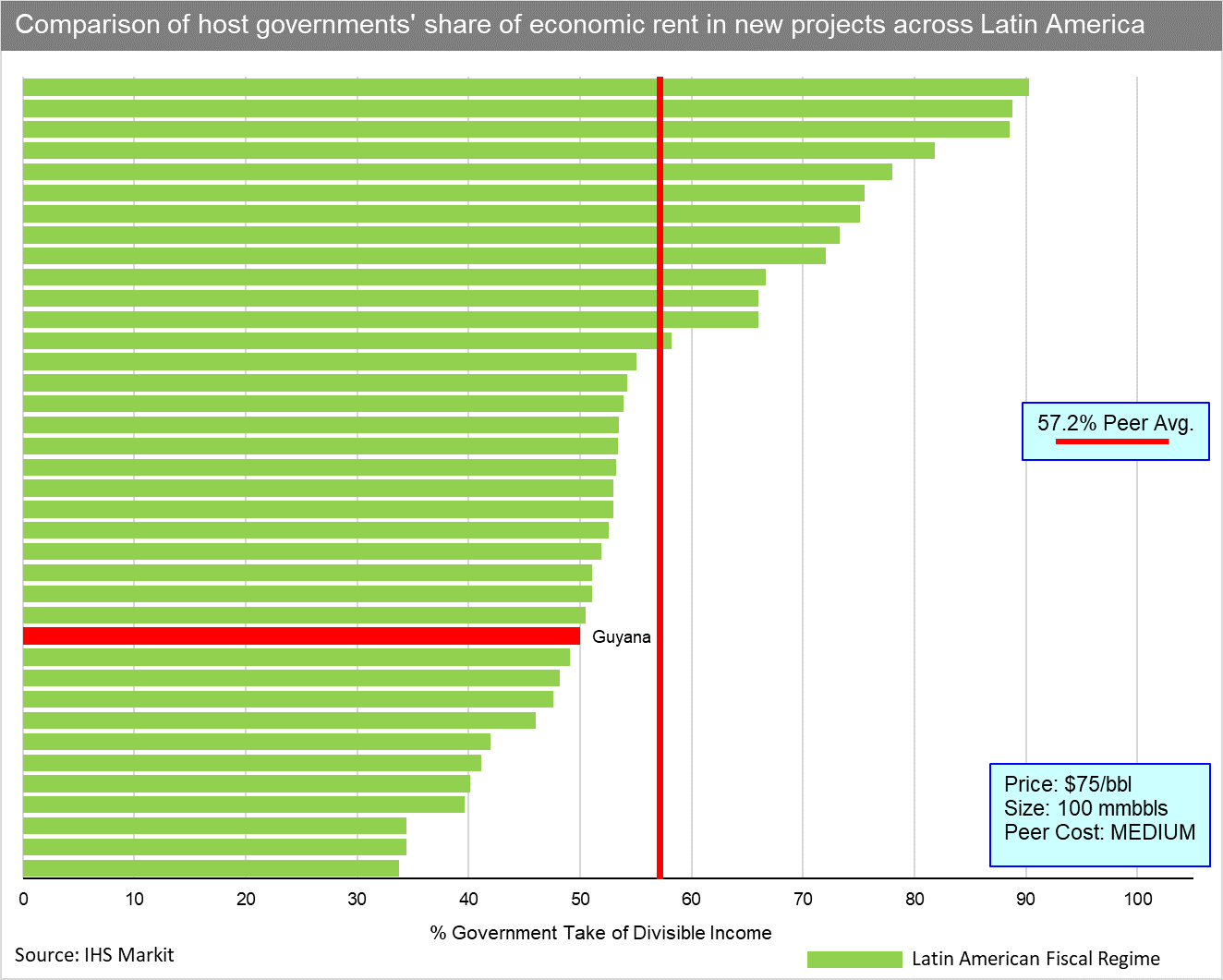 As indicated in the chart above, Guyana's government extracts a smaller share of the value of new discoveries than do other governments in Latin America.

Successful exploration drilling led by ExxonMobil and its partners has begun to de-risk Guyana as a deepwater hydrocarbon province. Guyana's transition to an emerging producer is prompting the authorities to consider certain adjustments to the upstream fiscal system and changes in the way unlicensed acreage is awarded. To date, Guyana has awarded upstream contracts via direct negotiation - a common method of awarding licences in frontier countries.

The International Monetary Fund (IMF), which is providing guidance to Guyana on management of eventual hydrocarbon revenues, suggested in April 2018 that Guyana's petroleum fiscal regime is too generous to foreign investors. Specifically, the IMF is advocating that Guyana draft future contracts to feature higher royalties, a profit share based on a sliding scale (as opposed to the currently fixed profit share), and tighter restrictions regarding cost recovery. The IMF also suggested that Guyana consider temporarily halting new licensing until a revised fiscal regime is enacted.

IHS Markit expects that any changes to Guyana's upstream fiscal regime will not materially hinder the country's ability to stay regionally competitive with other countries in Latin America. The fact that contracts extended in 2016 feature a fiscal stabilisation (or rebalancing) clause underscores the commitment on the part of local authorities to honouring the fiscal terms of signed contracts.

As shown in the timeline below, we anticipate that upstream investors will be able to access unlicensed areas through multiple pathways entailing operated and non-operated equity positions. However, Guyana will likely seek to enact a series of changes to upstream policy before licensing new areas through bid rounds or direct negotiations. Achieving all these objectives will require at least 12 months based on the experiences of other countries in the region. Importantly, a newly created Guyanese NOC will lack technical and financial capabilities required for deepwater exploration and production. Guyana therefore will remain entirely reliant on foreign companies to operate projects and provide the requisite capital through the medium term.

Learn more about our Petroleum Economics and Policy Solutions service.

RT @spencercwelch: Great to speak to @Bill_Lehane @business Crude prices being driven by quality, yields and product demands - as always,…

A few midsize oil-weighted US E&Ps stand out for trading at relatively low multiples of cash flow but yield the mos… https://t.co/bExlaCCY5E

The global push to net-zero has put pressure on #upstream operators. We explore the market potential for one offset… https://t.co/wQn5sVb6x4