The Gulf Cooperation Council (GCC) member states are forecast to spend over USD100 billion on their defence capabilities for the first time next year, with increasing budgets in Saudi Arabia and the United Arab Emirates (UAE) driving growth between 2018 and 2027.

"The 6 percent growth in defence expenditure in the GCC that we've seen this year is expected to slow, but growth rates of 3 to 4 percent a year are sustainable over the next decade - meaning that defence spending is likely to hit a record USD100 billion next year," said Craig Caffrey, principal defence budgets analyst at Jane's by IHS Markit. "If we see any significant increases in oil prices, we'll probably see further growth - or at the very least, more procurement activity."

GCC defence budgets have risen as a percentage of GDP over recent years, but even more significantly are also rising as a share of government spending; highlighting the importance placed on enhancing military capabilities. 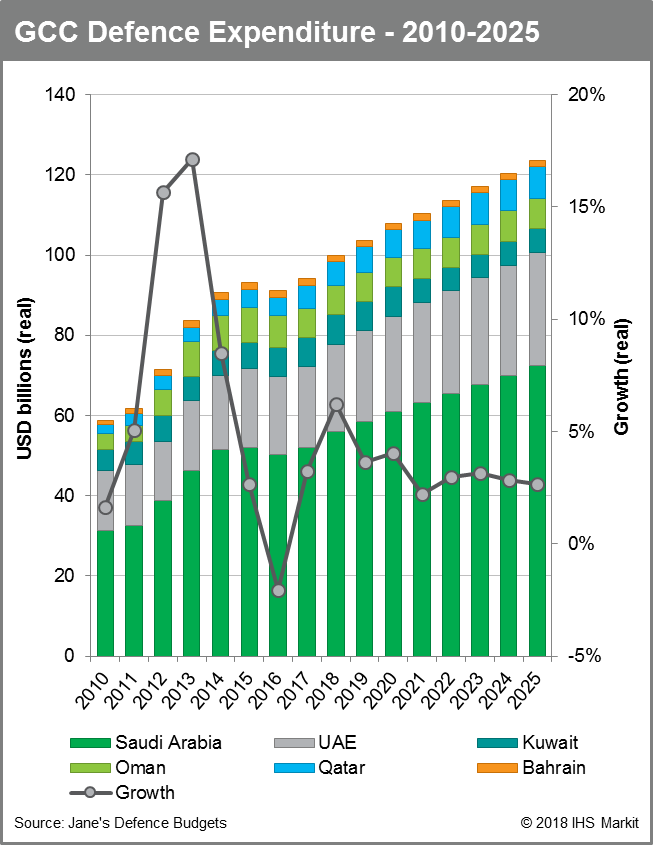 A major driving factor in defence procurement plans has been the increase in operational activity by GCC militaries in places such as Iraq, Libya, Syria and Yemen. Such actions have led to an increase in spending on the development of expeditionary and intelligence gathering capabilities, as well as the bolstering of combat aircraft fleets.

Despite accounting for just 5 percent of global defence spending the GCC is responsible for almost a quarter of all imports of defence equipment - importing assets worth approximately USD56 billion between 2014 and 2018.

North America and Europe provide about 95 percent of all equipment acquired by Gulf states. The US alone has accounted for about half of all exports to the GCC in the last five years. However, despite the prevalence of equipment from these sources, other suppliers - ranging from Australia to China and Turkey - are increasing their market presence.

"The modernisation and operational requirements of some militaries in the region are seeing some governments turn to alternative suppliers for equipment," said Charles Forrester, senior defence industry analyst at Jane's by IHS Markit.

"The downturn in oil prices in 2014 and 2015 made cost an important factor, while export controls from some key suppliers have prevented the transfer of desired equipment," Forrester said. "Similarly, operators in the region are becoming increasingly conscious of the cost of procurements and through-life support costs of equipment and systems."

Jane's Markets Forecast has identified USD48 billion in announced requirements and USD32 billion in unannounced opportunities in the GCC region over the next decade. 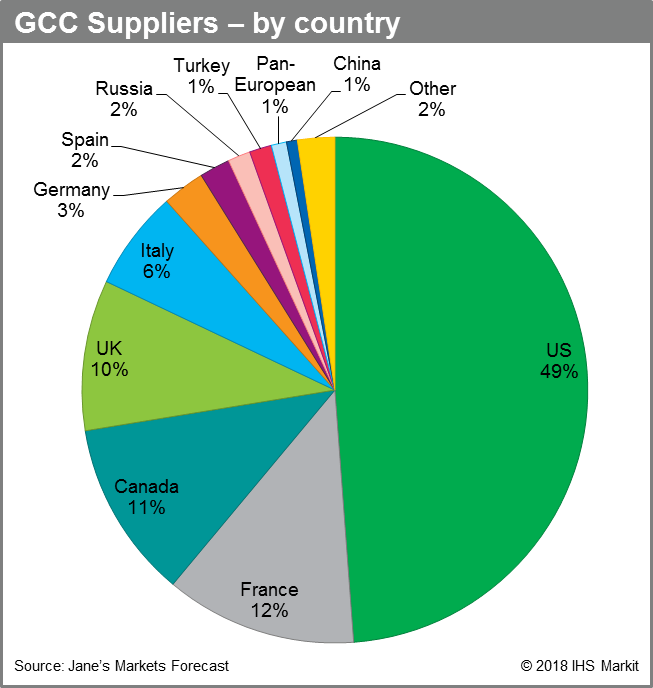 Countries in the region are also continuing to leverage large defence procurements to improve domestic military and non-military technological capabilities through offset programmes. Most notably, Saudi Arabia aims to increase domestic defence procurement spending from 2 percent to 50 percent by 2030 as part of the country's Vision 2030 goals.

Both the UAE and Saudi Arabia aim to improve their own defence industrial bases to improve self-sufficiency and ensure the security of supply for their own militaries. They also intend to leverage this capability to boost exports of locally made defence equipment, with the UAE already exporting its Nimr protected vehicle to countries including Algeria and Turkmenistan.

"Efforts to expand indigenous production over the next decade will need to be in partnership with foreign suppliers," Forrester said. "Requirements and supplier relationships may be shifting, but the overall strength of the market remains unchanged."

Learn more about Jane's Defence Budgets and Jane's Market Forecasts or get in touch for more information.