Despite higher oil and gas prices in 2021, major Gulf producers face sustained energy transition pressures, with falling global hydrocarbon demand a near certainty over the longer term. In response, Saudi Arabia, the UAE, and Qatar are acting with increasing determination and speed to safeguard and maximize the monetary value of their oil and gas resources - even as they downplay suggestions of the industry's near-term decline.

Focus on decarbonizing oil and gas production and generating near-term cash flow
In response to energy transition and climate pressures, Saudi Arabia, the UAE, and Qatar are adopting a range of actions to maximize the value and longevity of their domestic industries including:

Heavy reliance on national oil companies to shoulder the burden
To implement these strategies, Gulf governments are turning in large part to their national oil companies (NOCs). The graphic below plots Saudi Aramco, Abu Dhabi National Oil Company (ADNOC), and Qatar Petroleum (QP) against select global peers on the basis of a) their approach to climate and the energy transition, and b) their approach to the traditional E&P sector. 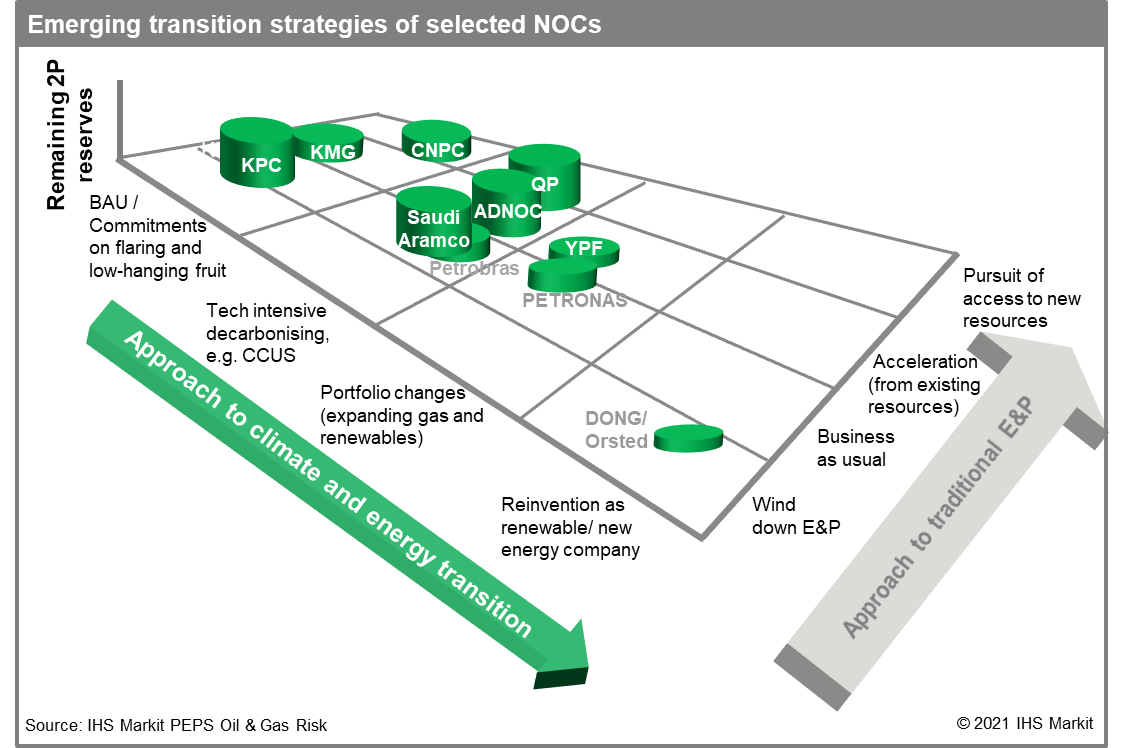 The three Gulf NOCs share a number of commonalities: Saudi Aramco, ADNOC, and QP are all clearly focused on decarbonizing current and future oil and gas production with the support of technology and, to varying degrees, seeking to accelerate production from existing resources. QP is unique in its pursuit of new upstream opportunities abroad, and it is now active in 14 jurisdictions in partnership with major oil and gas players.

Spotlight on the UAE: Pushing to decarbonize operations and accelerate monetization
The UAE's approach to the upstream reflects its dual aims of extracting the full value of its hydrocarbon resources while pushing ahead with cutting edge clean energy technology. ADNOC is targeting an increase in national oil production capacity from 4 MMb/d to 5 MMb/d by 2030, alongside a return to natural gas self-sufficiency. At the same time, the federal government is targeting a 23.5% reduction in economy-wide carbon emissions by 2030 (compared to business as usual).

ADNOC's participation will be critical to developing clean energy technologies and advancing the decarbonization of current and future hydrocarbon production. The company joined with state-owned Mubadala Investment Company and ADQ to form the Abu Dhabi Alliance in January 2021, aimed at establishing Abu Dhabi as a leader of low-carbon green and blue hydrogen internationally, in addition to establishing a substantial green hydrogen economy within the UAE. Development of a 1-MMtpa blue ammonia facility is already underway.

Carbon capture initiatives factor significantly into plans to reduce upstream emissions as well as facilitate the production of green hydrogen and ammonia. ADNOC began its carbon capture program in 2009 for use in enhanced oil recovery (EOR) and established its first carbon capture and sequestration (CCS) plant in 2016. ADNOC is now developing another CCS facility to capture 1.9-2.3 Mtpa of CO2 from its gas processing plant for use in EOR, and the company is targeting a sixfold expansion of its CCS capacity to 5 million tons of CO2 by 2030.

Implementation of CCS will be crucial to managing the next wave of upstream developments, some of which contain a much higher proportion of CO2, nitrogen, and H2S content, making them more energy-intensive to develop. Examples include ultra-sour gas projects like Ghasha Ultra-Sour Offshore Development and the Bab Sour Gas Development. CCS capacity will also be critical if and when ADNOC goes ahead with the development of the 22-billion-barrel onshore unconventional discovery reported in late 2020.

Window of opportunity for NOC-dominated producers - but for how long?
With publicly listed international oil companies under increasing pressure to reduce emissions and curtail new oil investments, but renewable energy sources not yet able to fill the role played by fossil fuels, NOCs are facing a key window in which to maximize the value of their remaining resources.

The ability of Saudi Arabia, the UAE, and Qatar - and their NOCs - to adapt and pivot in the face of new pressures suggest that they are well placed to compete in the energy space on both a cost and emissions basis over the coming years. Indeed, the extent to which they succeed in decarbonizing hydrocarbon production - and meet emerging buyer demands for lower-carbon energy sources - will factor heavily in determining the future of the industry.

Learn more about our coverage of E&P terms and above-ground risk at ihsmarkit.com/PEPS