Extortion reports increased to 13,203 cases during January-October 2019. Despite regular operations to break up extortion rings and limit prisoners' access to telecommunications, extortion continues to affect individuals, small- and medium-sized businesses, and the country's delivery and heavy cargo transport networks. Police have indicated that 47% of extortion calls in the country originate from Cantel prison (2,263 inmates) in Quetzaltenango, targeting the southwest Guatemala department. 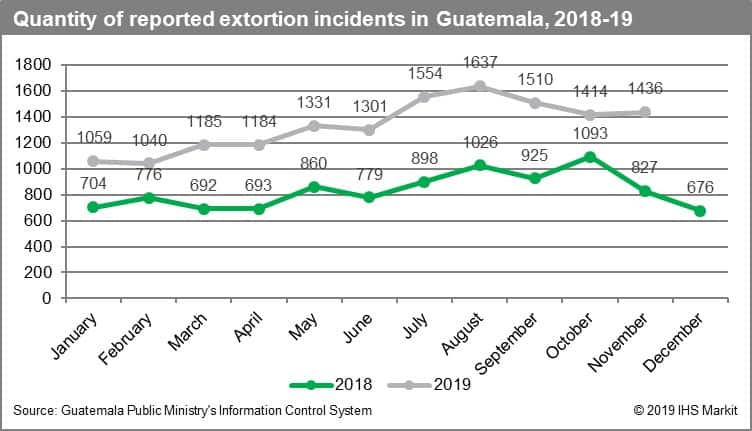 A growing number of actors are involved in extortion demands. Gangs with thousands of members like MS-13 and M-18 are responsible for only 40% of extortion demands, according to the head of the Prosecutor's Office against Extortions, Emma Flores. Others are smaller scale gangs with the operational capacity to adopt 'copycat' extortion tactics or former major gang members looking to create their own group. A textile factory (maquila) operator was arrested in November on charges of extortion, targeting contracting merchants in San Miguel Petapa. Also in November, a shooting incident between police officers took place in Zone 7 of Guatemala City when a group of police investigators attempted to arrest police alleged to be extorting locals.

Businesses are budgeting for extortion demands. According to Flores, although victims pay up because of their fear of being killed, only about 18% of extortion incidents result in fatalities: a 50% reduction in extortion-related fatalities in 2019, according to the National Division against the Criminal Development of Gangs (División Nacional Contra el Desarrollo Criminal de las Pandillas: Dipanda). Public transportation, cargo transit, and construction companies are among those typically budgeting for extortion payments, with average payments for a medium-sized transportation company amounting to USD2,610 per week.

Hotspots for extortion demands include Guatemala department, Quetzaltenango, Escuintla, and Chimaltenango. In Guatemala City, extortion-related shooting incidents targeting bus companies are concentrated on eight bus routes passing through Zones 1, 6, 12, 13, 16, and from Mixco to Ave Reforma in the capital. Extortion groups from Honduras and El Salvador have been captured in Jutiapa. Municipal and National Police officers have carried out a series of operations, including increased frequency street patrols, officers' visits to businesses, and in-transport monitoring in response to the incidents. From January to November 2019, 752 individuals were arrested on extortion charges.

Shootings involving extortion enforcement targeting public transport are increasing. Édgar Guerra, spokesperson for the Public Transport User Ombudsman's Office of the Office of the Human Rights Prosecutor (PDH), stated that criminal groups have increased the frequency and cost of payments in recent weeks. At least six shooting incidents have been recorded since the end of November 2019 in Guatemala City and its suburbs. According to Guerra, there are up to 100 incidents daily involving the threat or firing of a weapon on public transport. Public transport workers stopped operating some routes in the capital Guatemala City on 10 December to protest against the recent increase in armed attacks perpetrated by extortion gangs.