The Indonesian government on 20 July extended its coronavirus disease 2019 (COVID-19) emergency containment measures that began on 3 July to 25 July. According to government figures, there were 38,325 new confirmed cases and 1,280 deaths at the time of writing on 20 July. The number of confirmed cases is more than seven times higher than the figure for early June when Indonesia's second wave of COVID-19 outbreak began.

The emergency restrictions have to date been ineffective in reducing the number of COVID-19 cases, indicating that operational disruptions to businesses will increase in the coming weeks.

Although the number of confirmed cases has decreased from a high of 56,757 on 15 July, the reduction was probably caused by fewer tests carried out over the past week. Indonesia's test positivity rate of almost 30%, against the 5% benchmark recommended by the World Health Organization (WHO), further indicates that it is not carrying out enough tests. Moreover, the Ministry of Health said on 29 June that the more transmissible Delta variant is now the dominant strain in Indonesia. Additionally, only about 15% of Indonesia's population has been vaccinated at least once. Under the emergency restrictions (known in Indonesian as PPKM Darurat) that apply to Java, Bali, and 15 cities on other islands, sectors classified as "essential" such as banking and finance and export-oriented industries are permitted to operate with 50% of their workforce; critical sectors such as health, construction, and utilities are allowed to operate with 100% of their workforce. To date, there have only been anecdotal reports of companies unable to operate to their permitted capacity. However, given the spread of the Delta variant and relatively low vaccination rate, the number of companies that will operate below capacity is likely to increase. Export-oriented companies such as those in the footwear, garment, and automotive industries are likely to be affected.

A larger, potentially more devastating wave of COVID-19, driven by the Delta variant, is likely to derail the nascent economic recovery.

In response to the rapid spread of the Delta variant, IHS Markit has lowered its 2021 real GDP forecast for Indonesia to 2.2% from 4.0%. Between the tightening of containment measures, the straining of the healthcare system, and the potential under-reporting of infections, we forecast that hesitancy to or inability of Indonesians to leave their homes for work or other economic activities will weigh heavily on third-quarter GDP. Households have been the weakest link in the economic recovery thus far owing to a still-struggling labor market. As of February, the most recent official data, only 65% of workers were working full-time (down from well over 70% pre-pandemic) and many workers have shifted to the informal sector with lower and less consistent wages, leading to consumers tightly managing their spending. Closures of non-essential businesses undercutting their revenues and ability to undertake near-term investments will weigh on fixed investment spending. We also expect the government to reprioritize spending away from capital outlays back towards social and health spending in the coming quarters but changing spending gears can be slow. However, as indicated above, as long as Indonesia can source workers, export-oriented firms can continue to operate, which will limit some of the economic effects of the outbreak. 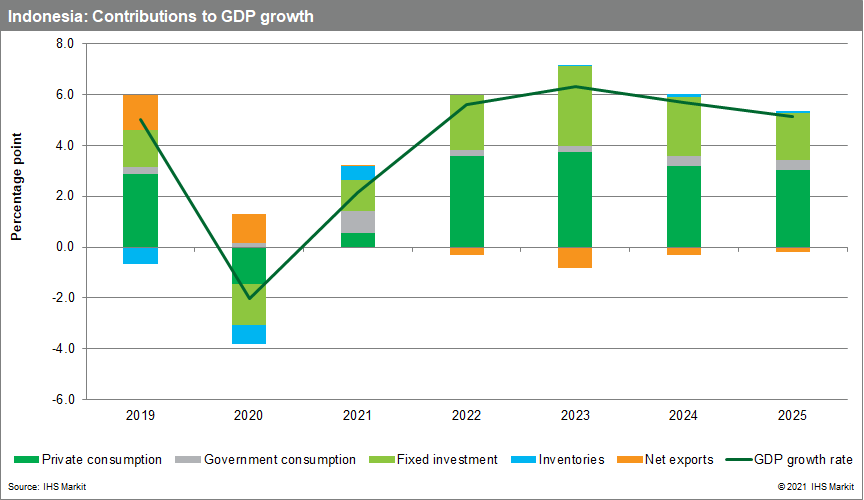 Dissatisfaction over the government's handling of the pandemic will lead to more local protests in the coming months, but they are unlikely to destabilize President Joko "Jokowi" Widodo's government.

There have already been sporadic, small-scale protests by students and small business owners involving dozens of people, mainly in Java, against perceived government failures. A survey by LSI, a reputable political polling firm, recorded a drop in Jokowi's approval rating in handling the pandemic from 56.5% in February to 43.0% in June, the lowest figure since the pandemic began. Nevertheless, there has been no sign of organized political opposition or indications from major labor unions that they will stage large-scale, multi-city protests.