On the back of rapidly decreasing costs for energy storage and solar photovoltaics (PV), consumers wishing to achieve a low-cost and reliable supply of power are considering grid defection-or at least, partial grid-defection-as an increasingly attractive alternative. But while lower energy costs are certainly welcome news for end customers, the same cannot be said for incumbent utilities, many of which will be facing new challenges that call into question their long-standing business model of selling and distributing electricity.

This article, then, will focus specifically on the economics of grid defection in Europe today and in the future, and will also examine how such a development could impact the energy industry.

In Europe the economics for going off-grid are improving, but practical considerations make grid defection unlikely to be a major disruptor to existing traditional and entrenched systems of consuming power. Even so, partial grid defection-especially a scenario in which PV is coupled with a battery energy storage system (BESS)-is seen by customers as an increasingly attractive option to hedge against future rises in retail power prices.

As part of the latest report published by the IHS Markit Energy Storage Intelligence Service, we carried out in-depth modelling using hourly demand profiles to compare the levelized cost of energy (LCOE) under four scenarios: future retail rates without any onsite generation; a solar PV system alone; a combination of solar PV and battery energy storage to maximise self-consumption; and a full grid-defection scenario equivalent to 100% self-consumption. The termLCOE, whichcompares the relative cost of energy produced by different energy-generating sources,is often touted as the new metric in evaluating cost performance of PV systems.

The modelling showed that: 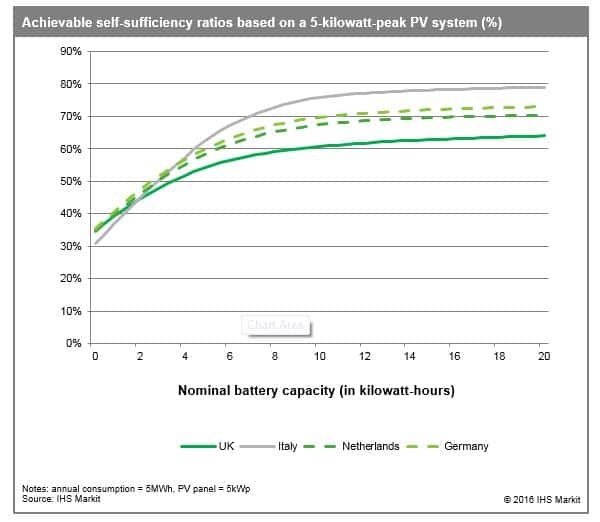 Regardless of the economics involved, we do not expect a scenario in which customers are fully disconnecting from the grid or achieving 100% self-sufficiency to become reality in Europe. This is due to both the technical impracticalities stopping such a scenario from taking root, and also because a widely stable electricity grid is already in place that makes complete grid defection unnecessary.

Nonetheless, IHS Markit expects that more than a million residential battery energy storage systems will be installed in Europe by 2025, driven primarily by customers looking to take control of their energy supply and to hedge against future price uncertainty.

As customers look to minimize reliance on the grid as much as possible, they need either active demand-side management or an alternative to consider new business models. A number of players, including the likes of Sonnen, E3DC, or Beegy, have started to act as electricity suppliers, offering customers the capability to achieve so-called virtual independence, through the mechanism described below.

The challenges of decentralised generation and self-consumption

Irrespective of the extent to which customers defect from the grid, or whether they choose new virtual self-consumption models, the shift toward the so-called energy prosumer fundamentally challenges the incumbents-electricity suppliers and network operators alike. In fact, the share of self-consumed power as part of total electricity demand is expected to double by 2020.

Still, IHS Markit predicts that utilities will play a major role in the growing energy storage market. Already, 7 out of the 10 biggest electricity suppliers in Europe, such as E.ON and EDF, are already commercialising propositions related to behind-the-meter energy storage.

Personally I believe the trend toward grid defection in order to increase energy independence won't stop. We see strong economic and emotional drivers supporting this shift. At the same time, utilities are clearly starting to understand that the energy landscape is shifting around them, and that they will be able to play a crucial role-not only in commercialising new business models, but also in binding customers through energy storage.

For more information on this and related topics, visit our Energy Storage Intelligence Service.