<span/>Chronic delays in numerous new power generation projects in Vietnam will likely cause severe power shortages over the next five years. In response to the new challenges, the Vietnamese government decided to increase renewable power to meet the rising demand and to reduce its reliance on coal. Against a backdrop of grid network overloads, enhancing the current grid capability becomes the key to bolstering Vietnam's fuel mix target.

Vietnam's upcoming Power Development Plan 8 (PDP 8) will prioritize grid projects, with the objective of developing more renewable energy and integrating them into the power system. The revised PDP 7 aimed to add 43 GW coal power capacity between 2017 and 2030; however, as of May 2020, about 21 GW (48.9%) of capacity is likely to be suspended or cancelled. The upcoming PDP 8 represents a new strategy that shifts the focus toward expanding renewable energy sources.

Developing high-voltage transmission lines connecting North, Central, and South Vietnam is critical to improving the country's power supply-demand balance. New transmission lines will bring gas-fired power from the central and southern regions to the northern region, helping to lower North Vietnam's currently heavy dependence on coal and hydroelectric power. Based on the IHS Markit model, the North-Central transmission line capacity must reach 6,000 MW by 2030 to limit coal share in the generation mix to below 45%.

Increasing renewables penetration necessitates major upgrading of the grid network. An increasing number of transmission lines and substations in the southern region are operating at full load or are even overloaded, resulting curtailment of renewable output. Achieving Vietnam's new goal of having 15-20% of total power generation come from renewable energy—mostly intermittent solar and wind sources—by 2030 will also depend heavily on construction of an enhanced nationwide grid network. 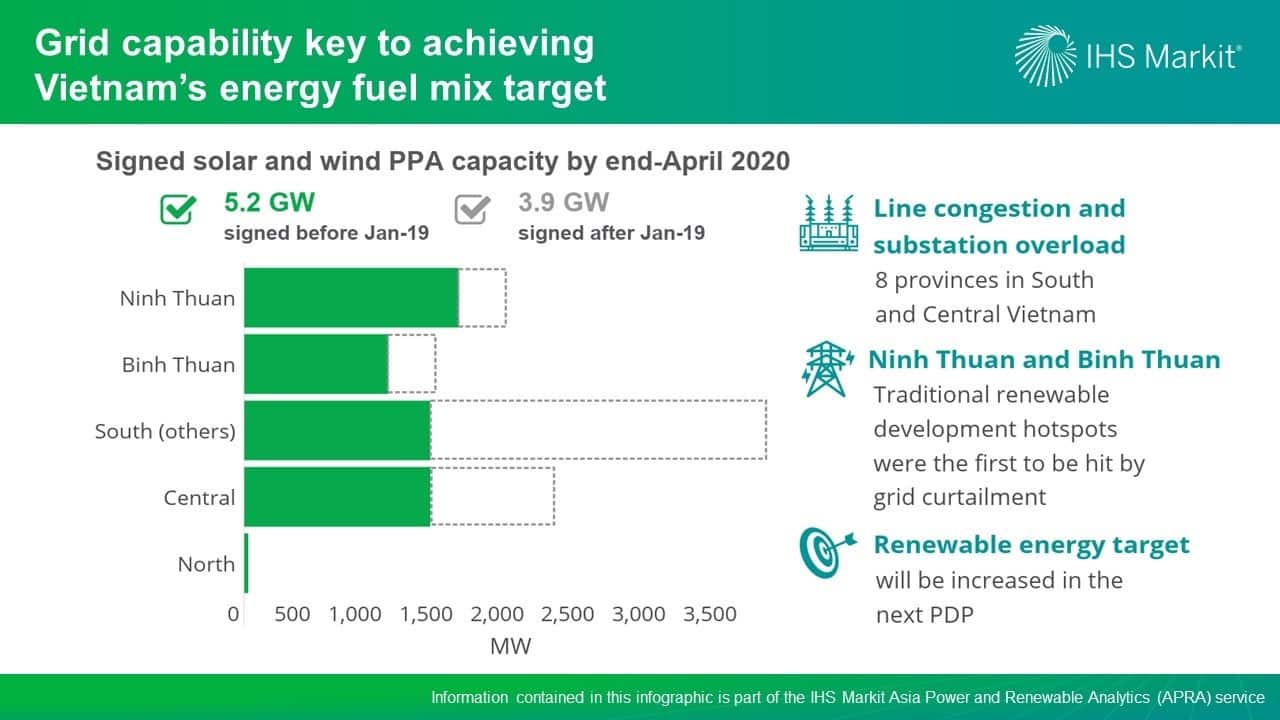 Opportunities for private investors to invest in grid projects are opening. A pilot project allowing a private company to build a substation and transmission lines was approved in March 2020. However, the pilot project cannot be immediately replicated by other private companies without major change in Vietnam's current public-private partnership (PPP) law.

To learn more about our research in Vietnam's power development, visit our South and Southeast Asia power service page.

IHS Markit experts are available for consultation on the industries and subjects they specialize in. Meetings are virtual and can be tailored to focus on your areas of inquiry. Book in a consultation with Cecillia Zheng.

Cecillia Zheng is an associate director for the Gas, Power and Energy Futures team at IHS Markit.