Greenhouse gas emissions - why methane is critical to the full picture

Methane is a more potent greenhouse gas (GHG) than carbon dioxide (CO2). Understanding methane's role in GHG emissions and climate change is critical for regulators, stakeholders, and global investors seeking to understand the challenges and opportunities posed by the energy transition.

There is increasing pressure from governments and regulators to find and measure methane emissions. This is part of IHS Markit current work to develop best practices for GHG accounting over the full life cycle of hydrocarbons from extraction through end use of refined products.

There is more to it than "carbon"

The majority of anthropogenic greenhouse gas (GHG) emissions, those generated as a result of human activity, are from burning fossil fuels. As shown in Figure 1, 75% of GHG emissions are carbon dioxide (CO2). Fossil fuel combustion in the energy sector is the primary source of CO2 emissions; however, other sources include land use change and forestry as well as industrial process. Methane (CH4) is the next-largest source of emissions, contributing about 17%. Approximately 40% of methane emissions stem from activities in the agricultural sector, followed closely by the energy sector at more than 35%.*

Nitrous oxide (N2O), responsible for about 6% of total emissions, is predominately emitted in the agricultural sector but is also a product of combusting fossil fuels. There are also a variety of other GHGs including various HFCs and PFCs, as well as SF6 shown as F-gases in Figure 1. **

For governments and companies to realize the net zero emissions targets many have put forward over the past 18 months, action to reduce all GHGs is expected. 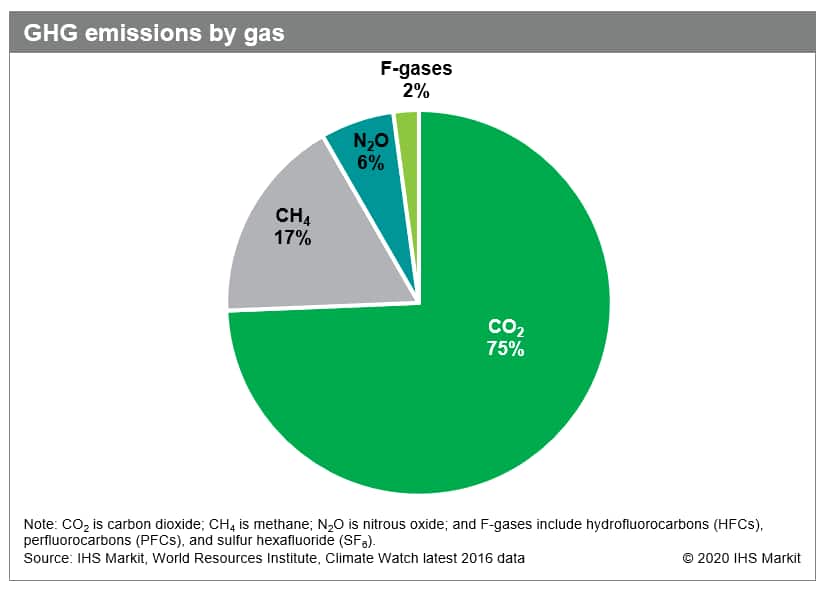 Why methane is important in the short term

GHGs emitted into the atmosphere trap heat from the sun and contribute to a rise in global temperatures. Once in the atmosphere, various GHGs can interact with the environment differently and contribute to varying degrees of global warming. This concept is known as Global Warming Potential (GWP). GHG emissions are often expressed in units of mass of carbon dioxide equivalent (CO2e), with GWPs being used to convert different gases into this comparative basis.

Despite being the largest contributor to overall GHG emissions, CO2 does not tell the whole story. Methane emissions contribute meaningfully to the overall GHG emissions levels and impacts. Compared with CO2, methane is a more potent GHG. Different GWP values apply to methane depending on the time period considered (e.g., a 20-year time horizon versus a 100-year time horizon). Over 20 years, methane will trap 84 times the heat of the same amount of CO2. Over 100 years, methane traps 28 times more. ***

The different values for the 20- and 100-year time horizons are a result of methane having a relatively short life in the atmosphere (approximately 12 years), after which the molecule breaks down. Conversely, CO2 can remain in the atmosphere for hundreds of years.****

This fact underscores the importance of focusing on emissions of methane in the near term to slow the rate of global warming as actions taken to reduce methane emissions can have 84 times the impact of similar reductions in CO2 in the next 20 years.

When trying to understand the relative GHG competitiveness of oil and gas assets or plays, methane can be particularly critical. In oil and gas extraction, methane emissions are the result of venting or fugitive releases of natural gas or produced gas, which is primarily made up of methane. Unlike CO2, which occurs primarily as a result of combustion, in the oil and gas value chain methane emissions are often unintentional and are not necessarily correlated with combustion (or other emissions). This fact can make methane difficult to assess for many plays globally. Yet, methane is material to understanding the footprint of oil and gas extraction. Figure 2 shows a comparison of the GHG intensities of four distinct offshore oil and gas plays, ordered from highest to lowest in terms of CO2 emissions intensity. What is very clear is that the relative rank of these plays using GHG emissions intensity does not align with a result using CO2 only. The primary driver of these differences is methane.

As exhibited in Figure 2, the impact of methane on the emissions profile can vary widely between plays. This variation can be a result of many factors including but not limited to the extraction technique, the age of the play, the design and age of the asset, access to supporting infrastructure such as pipelines to transport associated gas, the ratio of gas to oil production, and regulatory requirements. In addition to variance between plays, IHS Markit has found there can be considerable variation within plays as well. In undertaking a comprehensive analysis of key plays—modeling all operating assets in the play—IHS Markit has found a high degree of variability within each play. 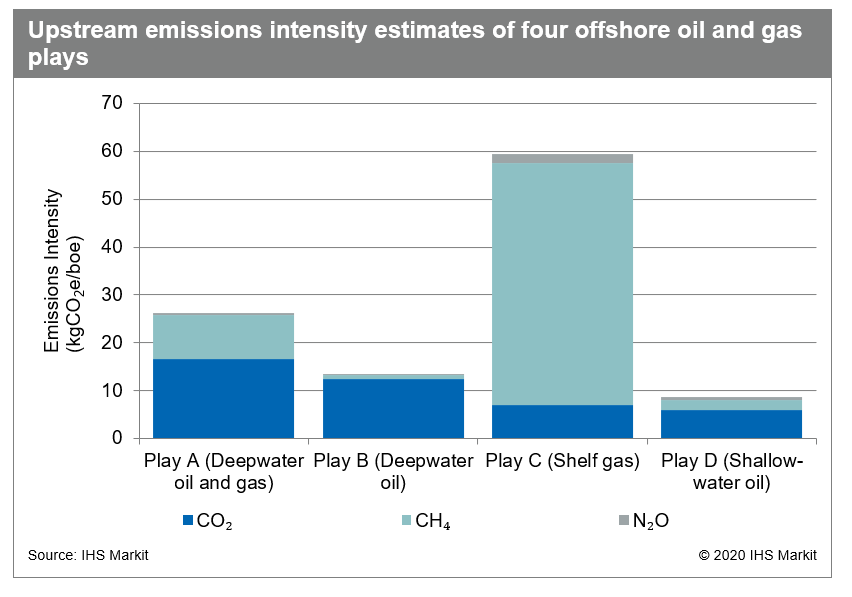 Methane - a key uncertainty in oil and gas GHG emissions

While methane can improve our understanding of the total GHG emissions intensity of oil and gas assets, it also presents a challenge. This result is in part because many methane releases are unintentional—often referred to as fugitive emissions—which implies they are unknown. Complicating estimating emissions of methane is that these emissions can occur at low rates from many dispersed point sources (e.g., small leaks). There is increasing pressure from governments and regulators to find and measure methane emissions as well as expanding efforts by third-party stakeholders to detect emissions from oil and gas operations via remote "beyond the fence" means such as mobile cameras and satellites and other airborne technologies (e.g., drones, balloons). Leading oil companies are in turn beginning to change how they approach the detection and mitigation of unintended methane releases from their assets, shifting from periodic, regulatory-required inspections to nearly continuous monitoring via a network of complementary technologies such as fixed cameras, drone- and airplane-deployed sensors, and satellite measurements. However, in the interim, for those seeking to understand oil and gas emissions, and the competitive dynamics between plays, methane emissions may remain a key source of uncertainty.

IHS Markit is developing best practices for GHG accounting over the full life cycle of hydrocarbons from extraction through end use of refined products.

The Intergovernmental Panel on Climate Change (IPCC) has published the GWPs of different GHGs for decades, and the values have changed. These changes are a result of the scientific community continuing to assess and adjust the values as more data and information become available and the understanding of the impact of these gases improves. Two recent sets of GWP values include one set from 2007 and one set from 2013. Table 1 includes values from the Fourth Assessment Report (AR4) published by the IPCC in 2007 and values from the Fifth Assessment Report (AR5) published by the IPCC in 2013. This situation begs the question of which GWP value is right. The answer is that, although the 100-year GWPs are most used, the different GWP values are all valid. The key is understanding which GWP values are applied and ensuring consistency when drawing comparisons between different GHG intensities.

For more on GWP, refer to the US EPA: Understanding Global Warming Potentials.

** The F-gases tend to be part of closed systems, acting as refrigerants or electrical insulators, and are therefore generally released unintentionally and sporadically in small quantities

***The 100-year GWP values tend to be the basis for consideration for policy-focused conversations.