September PMI® data showed the Greek manufacturing sector yet again providing a spark of light in the general gloom of the wider eurozone goods-producing sector. Solid growth in output and a further rise in foreign demand at the end of the third quarter signalled a sector seemingly riding the storm, despite ever increasing headwinds. Taking a deeper look into economic conditions across Greece, however, highlights ongoing likely difficulties in regaining sufficient growth to fully emerge from a decade of setbacks.

Going forward, recent projections from the Greek government signal expectations of 2.8% economic growth in 2020. Our view, although more downbeat at 1.7%, takes into account forecasts of ongoing trials for exporters and expectations that unfavourable external demand conditions will continue into next year. Another factor behind caution will be the speed and effectiveness of reform. The newly-elected government has promised vast swathes of reforms aimed at taxation and making Greece a more attractive place to invest, and although investor confidence is returning following more upbeat economic data, some of those looking to spend will most likely wait for positive results before allocating any meaningful capital investment.

The IHS Markit Greek Manufacturing PMI continued to top the global rankings table for all comparable surveys in September. The solid improvement in operating conditions was in stark contrast to other European economies such as Italy, Spain and Germany where contractions were registered. Moreover, Greek firms continued to signal strong expansions in output and new orders. 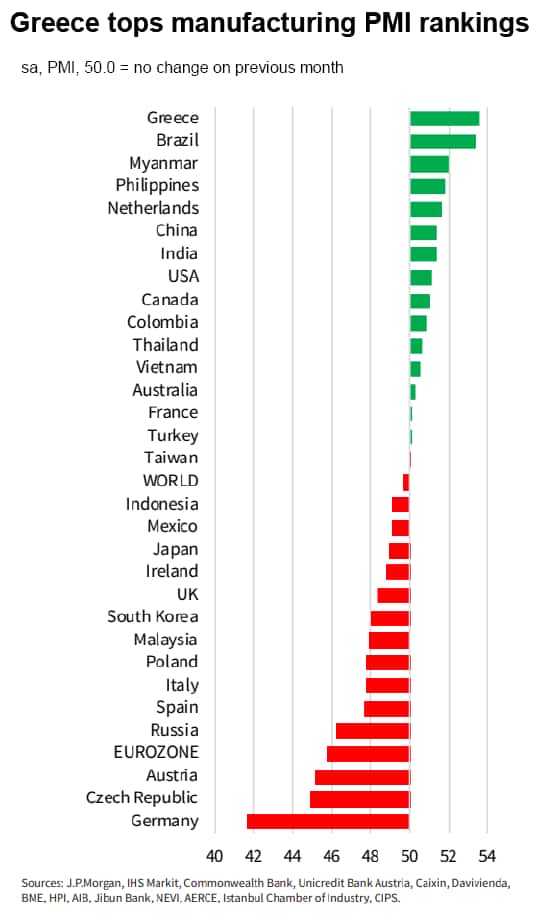 Most surprising was a further upturn in new export orders. Survey respondents across the eurozone have increasingly noted weak external demand conditions, with many highlighting a reluctance to place orders amid trade wars and greater uncertainty. As the Greek economy is still in the process of recovering to pre-crisis levels, manufacturers are continuing to signal an upturn in exports according to PMI data, with demand levels growing from a lower base. This may, in part, explain why Greek manufacturers are continuing to signal export growth, when their eurozone counterparts are highlighting lacklustre demand. 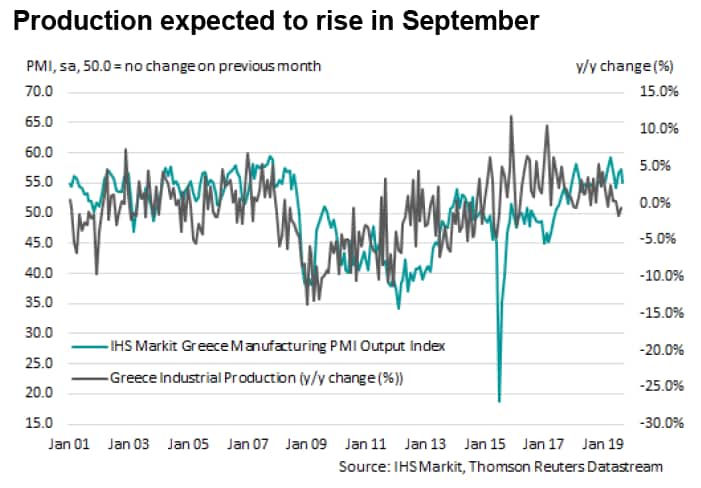 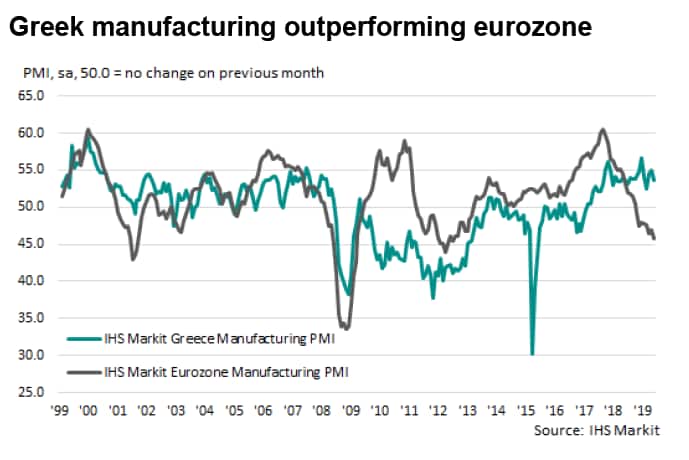 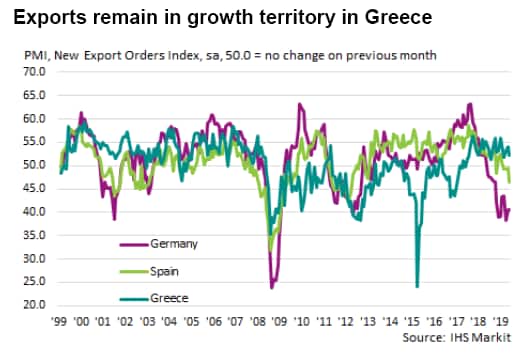 Since July, the level of business optimism across the Greek manufacturing sector has picked up to reach fresh record highs (since data collection for the series began in July 2012). Producers have commonly stated that more business-friendly policies from the newly-elected government have resulted in greater expectations towards output over the coming year.

Importantly though, reforms will need to prove effective in the short-term if the re-emergence of investor confidence seen over recent months, and the hoped-for acceleration in growth, is to be secured. Among the reforms put forward by the new government are tax cuts, including those levied on property and corporations, with fewer obstacles and reduced bureaucracy surrounding investment also proposed. It will take some time, however, before such changes will have an impact on the economy as a whole. Therefore, any boost to sales and consumption may take longer than 12 months to become apparent if not implemented fully and effectively, especially given current global demand conditions. Also, key to ensuring such reforms are successful are reassurances that Greece will still be able to meet its creditor's requirement of a 3.5% primary budget surplus. 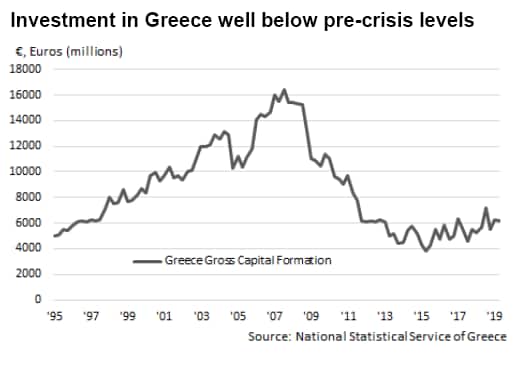 The European Commission also notes that GDP growth of 2.8% in 2020 may be ambitious given current debt requirements and external economic conditions. Its forecast places next year's GDP expansion at a more modest 2.2%.

However, for an economy still acting far below its pre-crisis levels, meaningful growth is needed to support strong job creation and improved living standards. This is especially important for youth unemployment, with Greece suffering from a 'brain drain' since the crisis. Positive steps towards attracting long-term investment, including those already seen such as a return to economic growth, could be key to providing greater stability.