There is a 40% chance of the average global temperature reaching 1.5 degrees Celsius above the pre-industrial level for one of the next five years, according to an update of the Annual-to-Decadal Climate Update issued 27 May by the World Meteorological Organization (WMO).

The Paris Climate Agreement, signed in 2015, seeks to limit global warming to well below 2 degrees Celsius, with an aspirational goal of 1.5 degrees Celsius.

"The chance of temporarily reaching 1.5 degrees Celsius has roughly doubled compared to last year's predictions," the WMO said. "This is mainly due to using an improved temperature dataset to estimate the baseline rather than sudden changes in climate indicators."

The United Nations agency, however, stressed that that national commitments to cut emissions, known as nationally determined contributions (NDCs), currently fall far short of what is needed to achieve the Paris goals. At the US-led Leaders Climate Summit in April, several countries, including the US, enhanced their NDCs, with the US now targeting a 50-52% GHG reduction from 2005 levels by 2030.

The update also said that there is a 90% likelihood of at least one year between 2021 and 2025 being the hottest on record.

It said the annual average temperature is likely to be at least 1 degree Celsius warmer than pre-industrial levels in each of the next five years and is very likely to be within the range of 0.9-1.8 degrees Celsius above. The year 2020 was the third-warmest on record, with a global average temperature 1.2 degrees Celsius above the pre-industrial baseline. 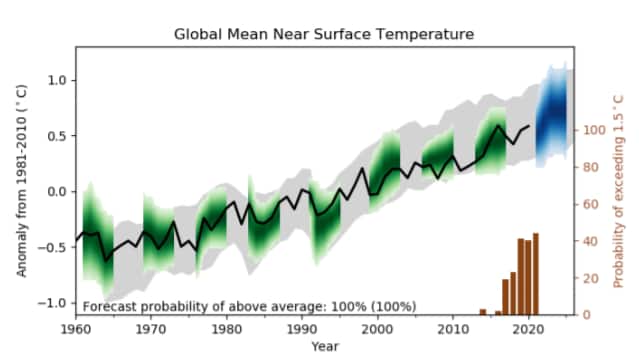 During the same period, high-latitude regions and the Sahel are likely to be wetter, and there is an increased chance of more tropical cyclones in the Atlantic compared with the recent past, the WMO said.

"It is yet another wakeup call that the world needs to fast-track commitments to slash greenhouse gas emissions and achieve carbon neutrality," said WMO Secretary General Petteri Taalas.

Taalas said the report underlines the need for climate adaptation, too, adding that only half of the 193 WMO members have the latest early warning services to protect residents from severe weather events.

Countries should continue to develop the services that will be needed to support adaptation in climate-sensitive sectors such as health, water, agriculture, and renewable energy.

The update is based on contributions from the UK's Met Office as well as climate prediction groups from Spain, Germany, Canada, China, Japan, Australia, Sweden, Norway, Denmark, and the US. It said combining forecasts from climate prediction centers worldwide enables a higher-quality product than a single-source forecast.