The escalating trade war between the US and China has had a limited direct impact on the refiningand chemical industries. So far only liquefied petroleum gas (LPG) and polyethylene have been materially impacted by the imposition of new tariffs. Both countries realigned their trade practices slightly, with Chinese importers of LPG, chemicals, and plastics swapping out US-sourced cargo and US exporters seeking other markets (see Figure 1).

Despite the relative success of this LPG trade realignment, it has not come without a cost. As Chinese importers turn more to Middle East supply, Saudi Arabian contract prices have increased, making the Middle East the main beneficiary of the tariffs. The knock-on impact for other importers of Middle East LPG has been higher import prices, resulting in a rising Far East Index (FEI), a price benchmark for the general Northeast Asia region.

A different realignment has been observed in polyethylene, the largest chemical product export to China. While trade routes have changed, with U.S. exports redirected from China to other countries, China prices have remained capped despite the 25% trade tariffs. This is due to the relative supply excess in this global market, which includes sources in multiple geographies. However, North America polyethylene exports will grow from 3 million metric tons (MMT) in 2017 to 9 MMT in 2020. With China representing nearly 50% of the annual demand growth, competitive access to this market will become increasingly important.

These test cases demonstrate room to mitigate the direct impact of tariffs. However, there is a growing expectation that the wide-ranging economic ramifications of newly imposed tariffs will exert downward pressure on demand growth for both chemicals and refined products.

Since January 2018, when the US imposed a 30% tariff on imported solar panels - the majority of which come from China - a raft of new measures have been announced by the Trump administration. Roughly USD 250 billion worth of Chinese imported goods are now being targeted under Section 301 of the Trade Act of 1974. After the first wave of measures targeting USD 50 billion, an additional USD 200 billion are subject to a 10% tariff since September 24. What's more, the tariff rate is due to rise to 25% in January 2019. A third package of tariffs, targeting another USD 260 billion, has been threatened if China retaliates. Tariffs as high as 25% on European and other foreign-made automobiles are also being discussed. US trade partners have retaliated in kind, imposing their own tariffs on US exports.

While there may be short-term benefits for the US, IHS Markit's view is that tit-for-tat trade tariffs will benefit nobody in the long run. IHS Markit has already revised the global GDP growth forecast for 2019, from 3.2% in January 2018 to 3.0% in October 2018. In addition, IHS Markit has downgraded growth projections for 2020, from 3.0% in January 2018 to 2.9% in October 2018. IHS Markit expects the pass-through effect of tariffs to domestic prices in the US will be high, eroding purchasing power. Ultimately, IHS Markit believes that the inflationary effects of a trade war will exceed the benefits for the US and that this will be exacerbated by retaliation. The impact on China will be twofold. First, Chinese exports to its largest trading partner will be directly impacted. Second, reduced inward foreign direct investment will hamper growth. In addition, the spill-over effects will undermine confidence and asset prices globally, further reducing global GDP growth in 2019 and 2020 and impacting the chemical and refined product markets.

Refined product markets are likely to be affected by the downward pressure a weaker economic outlook could impose on demand. IHS Markit has revised 2019 GDP forecasts downwards by 0.2% for China (from 6.3% in January 2018 to 6.1% in October 2018) and upwards by 0.1% for the US (from 2.6% in January 2018 to 2.7% in October 2018). Global GDP is projected to grow 3.0% in 2019 versus a previous prediction of 3.2%. Based on historical GDP growth trends, IHS Markit would expect to revise 2019 demand growth downward by up to 250,000 barrels per day (b/d). However, these projected changes downplay the impact on demand. A secondary effect of the trade tariffs is rising US interest rates and an appreciating dollar, which in turn have contributed to emerging market currency devaluation. While the impact has not been as significant in some markets as it has been in Argentina and Turkey, the net impact is that refined products are becoming more expensive in local currency (see Figure 2). 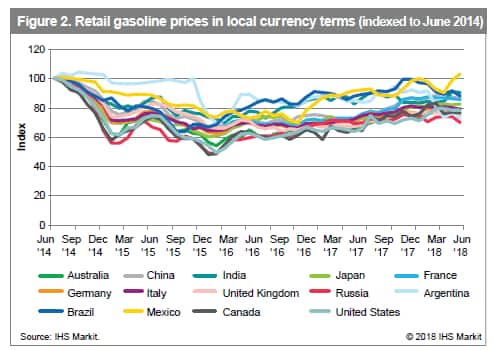 Combined with a relatively high crude price environment, these factors may create the perfect recipe for price-sensitive demand. Considering that demand growth has been slowing following several years of very strong growth, additional downward pressure on demand is likely to reduce both crude prices and refining margins. That projection assumes there are no major supply disruptions, which is still a serious risk.

Chemical markets continue to grow at multiples of GDP, ranging from 1 to 1.5X. Yet this amplification works in both directions. Thus, changes in economic growth are magnified in chemical market demand (see Figure 3). Economic simulation scenarios of a full trade war outbreak reflect potentially severe short-term effects on the Chinese economy, with a 30% to 40% decline in GDP growth from more than 6% to 3.5% GDP). With China representing the epicenter of chemical demand growth, this creates a potential for significant disruption of chemical markets.

Early trade skirmishes are having minimal impact on refining and chemical industries, as these efficient commodity products reroute for optimal lowest delivered cost. The more disruptive potential occurs in the event of escalation to a full trade war, which could exert potentially damaging blows to regional and global economies. Lost demand and immediate excess supply situations could follow, creating falling margins for industry participants. 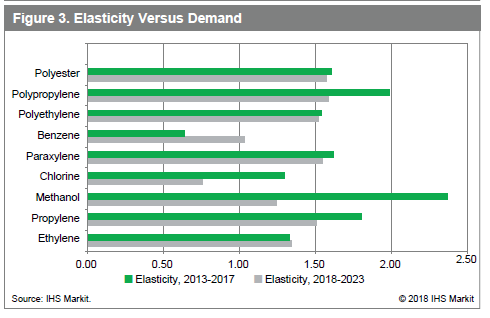