Shipping has been warned that access to bank finance will be very tight. Newly released data from Dealogic reveals just how tight it has become: the volume of syndicated marine loans in the first quarter of 2017 was the second lowest on record.

The Dealogic data points to a veritable collapse in the syndicated debt market for maritime borrowers. Only 26 syndicated loans totalling USD3.8 billion were recorded, down 80% in value from USD19.2 billion in the fourth quarter of 2016 and down 86% from USD26.3 billion in the same period last year (see chart below).

Even in the darkest depths of the financial crisis in 2009-10, syndicated marine loan volumes did not sink as low as they have this year. During the financial crisis, loan volumes did not fall under USD10 billion per quarter. Dealogic has been compiling quarterly syndicated marine loan statistics since 2003. The lowest quarterly total ever recorded by Dealogic - and the only one lower than the most recent period - was USD1.4 billion in the third quarter of 2003. That was 14 years ago, at a time when the global shipping industry was dramatically smaller than it is today, and during a period when China had not yet arisen as a world trade powerhouse.

Dealogic began segregating its data between offshore loans and other marine loans (including those to commercial shipowners and other maritime-related interests) in 2007. For the first time since it began doing so, Dealogic did not segregate the data in the first quarter of 2017. When asked why by Fairplay, it replied that there were actually no syndicated offshore loans reported in the first three months of this year. Furthermore, at least 36% of the loans that were reported (USD1.38 billion) were to non-commercial shipping interests: ports, ferry companies, marines, and crewing companies.

Another unusual aspect of the loan data for the first quarter of this year was the league table of top bookrunners. The top bookrunner of marine syndicated loans was Bank of America Merrill Lynch, with Sumitomo Mitsui Financial Group, Societe General, Goldman Sachs and Wells Fargo rounding out the top five.

In both full-year 2016 and 2015, the top three bookrunners for marine syndicated loans were DNB Markets, Citi, and Nordea. In the first quarter of this year, DNB Markets and Nordea were not even listed in the top 10, and Citi was listed tenth. 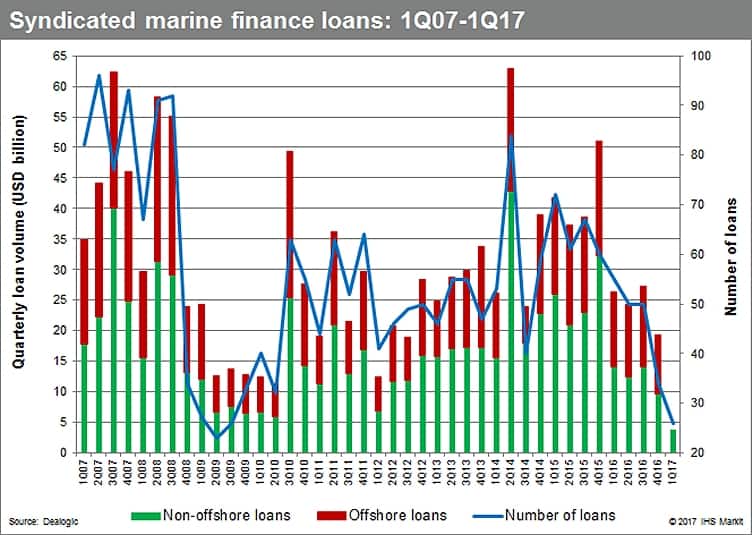