IHS Markit has tracked the bunker specification change for nearly a decade. In 2009, we released a multi-client study asserting that a bunker fuel specification could result in huge disruption to global oil markets. Yet this prediction was met with considerable skepticism.

In 2014, a follow-up IHS Markit study called What Bunker Fuel for the High Seas? reasserted the expectation of likely market disruption. This study was the first to suggest that compliance would be mostly achieved through consumption of 0.5% sulfur fuel, with scrubbers that reduce emissions quickly becoming important for larger ships.

In October 2016, the International Maritime Organization (IMO) announced plans to reduce its global bunker fuel specification from 3.5% to 0.5% sulfur for maritime bunker fuel, effective January 2020. Following this, IHS Markit predicted not only that would there be insufficient time for the shipping and refining industries to prepare for this change but that significant disruption to oil markets was likely.

Optionality and the prisoner's dilemma

The key reason that three years was insufficient is optionality. For most specification changes, it is clear which player needs to make the change: the supplier, which is usually the refinery. However, IMO 2020 is different. Either the supplier can make the change or the buyer can continue to buy the "off-specification" fuel, as long as the buyer installs a scrubber on each ship to maintain atmospheric emissions at the same levels as low-sulfur fuel.

This optionality results in the classic prisoner's dilemma. If everyone invests in scrubber technology, there is no bunker fuel market disruption and no payback. Alternatively if very few invest, the market experiences a huge shortage of very low-sulfur fuel oil (VLSFO), a large excess of high-sulfur fuel oil (HSFO), and significant market disruption - along with a very attractive payback for the few that invested.

Ironically, this dilemma has effectively stalled investments. Only since mid-2018 have scrubber investments started to increase. We now expect only around 2,000 of the world's 120,000 ships to be fitted with scrubbers by the start of 2020.

Our base case assumes 85% compliance with the new specification and 2,000 ships fitted with scrubbers at the start of 2020. We created a set of scenarios to provide a broad range of alternatives in which the IMO 2020 transition might unfold. These include high and low compliance, high and low scrubber installation, delayed commissioning in some key refinery projects, and the potential of phased implementation and enforcement in 2020. 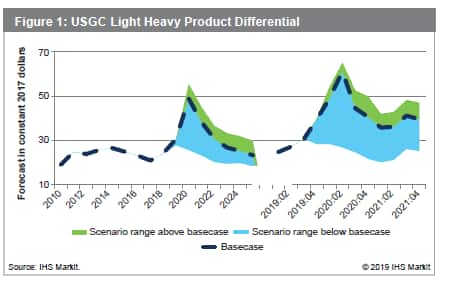 Quarterly average pricing is important, as the market impact could be distinctly different from the first quarter of 2020 to the fourth quarter. The USGC product light-heavy differential in 2010-2018 averaged around $22 per barrel (bbl).

In our base case, we expect this gap to widen to almost $50/ bbl on an annual average basis in 2020. On a quarterly basis, this differential might hit $60/bbl. In our base case, the peak of the IMO transition market impact occurs in the second quarter of 2020. Although the new specification goes live on January 1, 2020, the carriage ban (legislation preventing ships from carrying HSFO in their fuel tanks unless they have a scrubber) does not take effect until the end of the first quarter 2020. We believe this ban will be instrumental in raising compliance rates.

The market impact differs by scenario. The "very low-compliance" scenario creates almost no market impact. The compliance scenarios appear to exert much more influence on the outcome than changes in the rate of scrubber installation on ships.

Scenarios are similar when looking at crude prices, crude price differentials, individual refined products, and refining margins. All but the simplest refineries are likely to receive a margin boost from the IMO 2020 transition, because of the tightening of the distillate market. However, there are significant differences between scenarios in terms of the total margin boost and its duration.

Scenario analysis provides a strong indication of the range of potential market outcomes. To understand the probability ranges, our final step was to apply a Monte Carlo probability technique to the IMO impacts of key variables, such as U.S. Gulf Coast (USGC) compliance and scrubber installation rates.

The IMO 2020 bunker fuel transition adds another layer of uncertainty to an already ambiguous oil market, as confirmed by our scenario and Monte Carlo analysis. These analyses provide valuable granularity on the most influential variables for the IMO transition through 2019. Our analyses also provide information on the range of impacts, which helps those most affected be better prepared, minimize downside risk, and look for upside opportunities.

Note: The IHS Markit study Navigating Choppy Waters provides full price sets for USGC, U.S. East Coast, Europe, and Singapore crude prices, refined products, and refining margins for the base case and each of the scenarios. It also provides detailed supply, demand, and trade analysis of the new VSLFO and HSFO, using refinery-by-refinery modelling. More information on the study can be found on the website or from the author of this article. www.ihsmarkit.com/imo2020