Detail sector PMI data compiled by S&P Global, derived from information provided by panels of over 30,000 companies in 45 countries, reveals how the economic recovery is being fueled by resurgent spending on consumer services during the second quarter. May saw a further acceleration in demand for services such as travel and tourism in particular following the recent relaxation of COVID-19 travel restrictions in most major economies.

Consumer goods industries meanwhile remain hamstrung by supply chain bottlenecks, soaring costs and the shift in spending toward services, reporting only modest growth in May to contribute to a broader manufacturing malaise. However, the hardest hit producers were auto makers, where supply delays and weakened demand led to a steepening downturn. It was nevertheless the banking services sector which reported the steepest contraction of all, reporting one of the steepest declines in business activity since the global financial crisis amid an environment of worsening financial conditions.

One ray of light came from a return to growth of food production for the first time in four months, in turn taking some of the pressure off food inflation, albeit with prices continuing to rise at a rate only modestly below April's record peak. 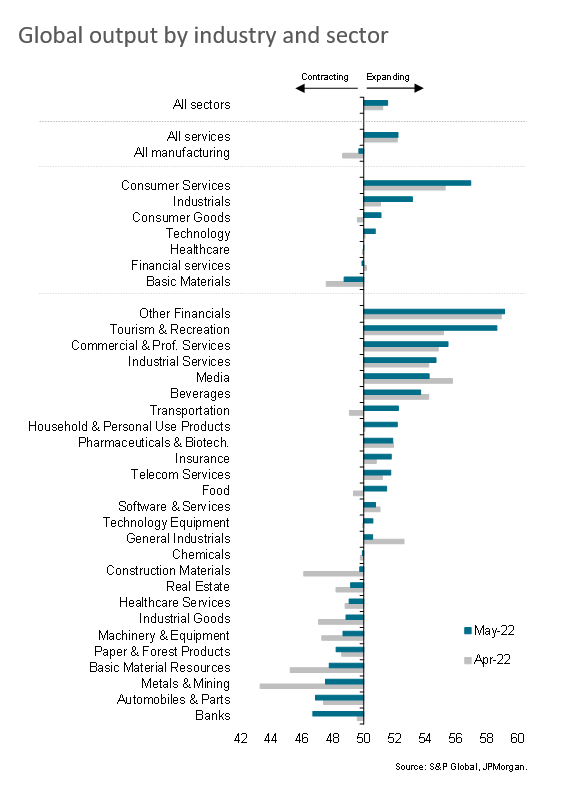 Global economic growth continued to be fueled first and foremost by resurgent demand for consumer services in May. For the second month running, S&P Global's detailed sector PMI™ data showed business activity in the consumer services industries far outpacing that of all other major industry categories. While not matching the growth spurt seen during the initial opening up of economies from COVID-19 related restrictions in mid-2021, the growth surge for consumer services following the fading of the Omicron wave in recent months has been stronger than anything seen prior to the pandemic since the global sector PMI data were first available in 2009.

The global growth boom for consumer services contrasted with near-stalled output of consumer goods, which have suffered from a combination of supply shortages, soaring prices and the switching of household demand to services following the general relaxation of global travel restrictions. 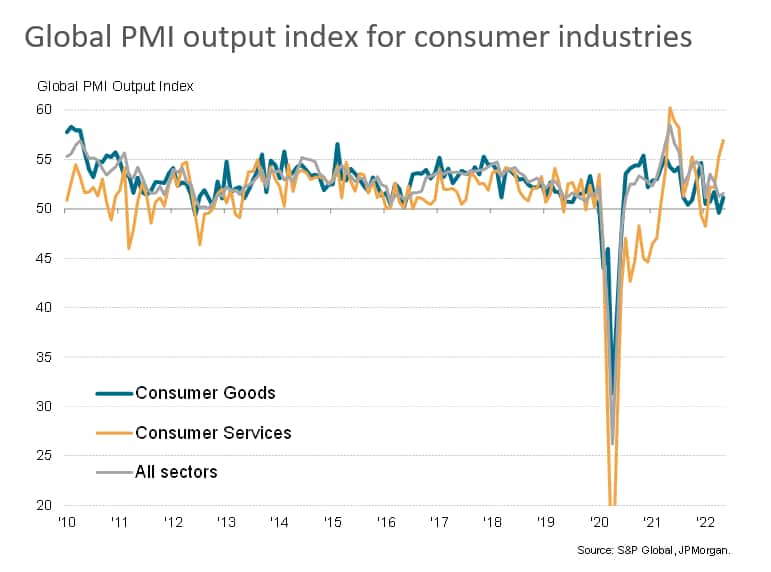 Trends in demand for consumer goods and services varied markedly around the world, however, largely reflecting differing degree of pandemic health restrictions. While both the US and Europe have seen a continued surge in demand for consumer services in May, demand (and output) fell for a fourth successive month across Asia, albeit to a large extent reflecting ongoing lockdowns in mainland China which, due to its size, dominates the Asia PMI numbers.

For consumer goods, the US stands out in recording strong and accelerating growth in demand during May, with new orders rising at a rate not witnessed since last August. In contrast, May saw falling orders for consumer goods in Europe (where the largest decline for 18 months was recorded) and to a lesser extent in Asia. Note that all regions reported falling exports of consumer goods, albeit with the US recording the smallest decline, hinting that the divergences lay largely with domestic consumers. 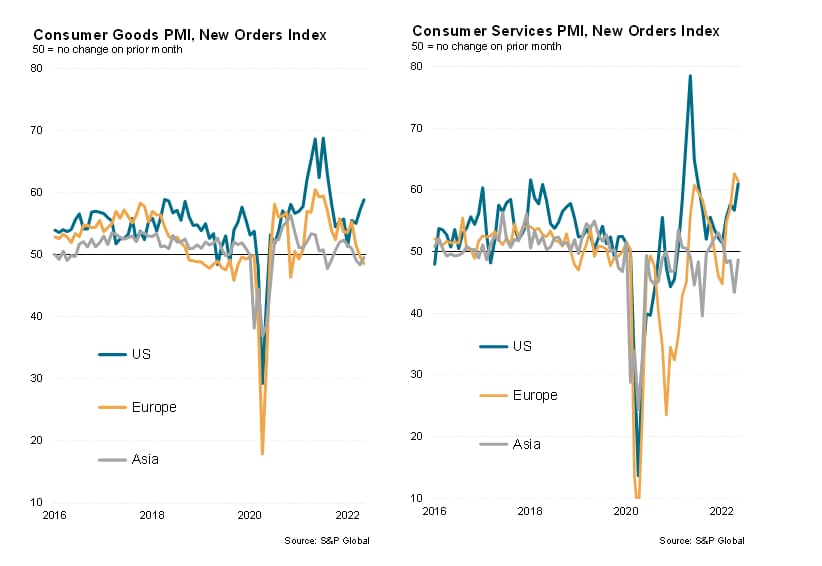 Looking into the PMI data at a more detailed sector level, the revival in consumer services output was led by tourism & recreation. However, the fastest expansion of output across all sectors was in fact recorded by sustained near-record growth in 'other financials', which greatly outperformed other areas of financial services.

Both banking activity and real estate activity levels fell in May, often blamed on rising borrowing costs and concerns about inflation and weakening economic growth prospects, and only modest growth was recorded for insurance. Barring the initial pandemic downturn, the fall in output for banking services was the steepest recorded since data were available in late-2009, with banking also seeing the steepest drop in activity of all sectors in May. 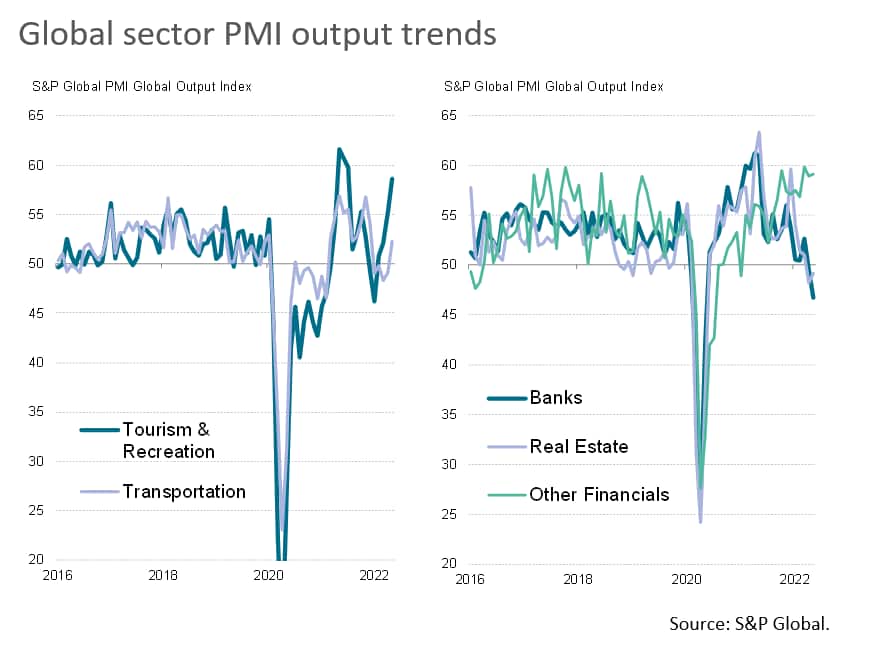 Meanwhile the manufacturing woes were not confined to consumer goods. Supply chain delays, customer resistance to price hikes, spending shifts to services and reports of rising caution in respect to spendings amid increased risk aversion hit many other goods producing sectors, resulting in a second successive month of manufacturing contraction. The hardest hit was autos & parts which, despite signs of improvement in Europe, reported the steepest production fall since last October, with production now down for a second successive month. However, besides paper & forestry products, the autos sector was the only area of manufacturing to report a steepening downturn. Most notable were easing contractions in primary industries, such as metals and mining, basic material resources and construction materials. 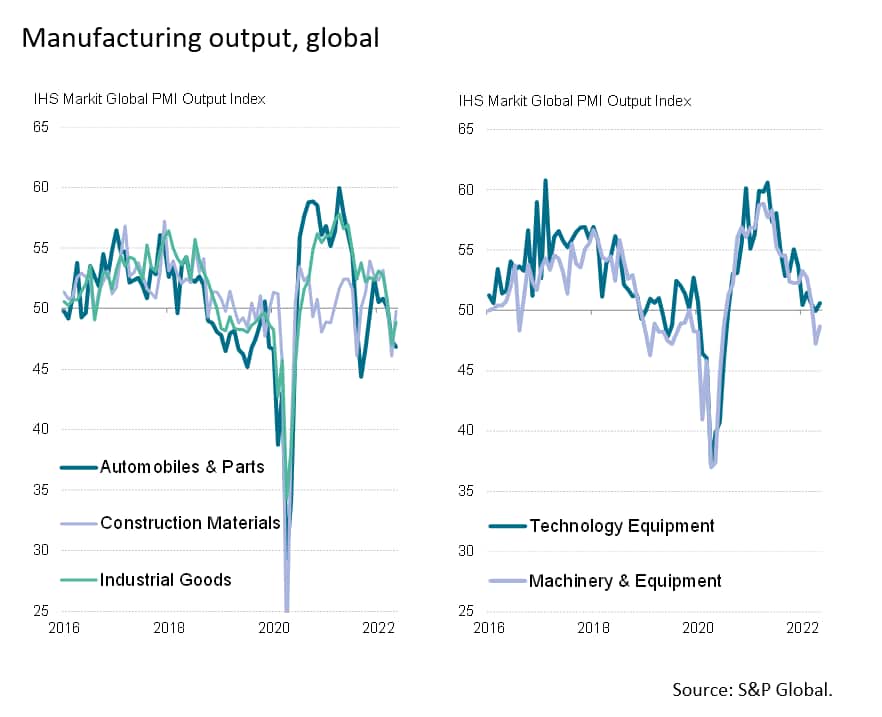 One further sector of note is food production, with soaring food prices being a major global issue. May brought some tentative good news: although prices continued to rise at a rate not previously seen in the survey's near-13-year history, the rate of producer selling price inflation cooled from April's record high. At the same time, global food production returned to modest growth after three months of decline. While one month's data should be treated with caution, the cooling of food price inflation and increased production in May offer some hope that the food element of the cost-of-living crisis could be peaking. 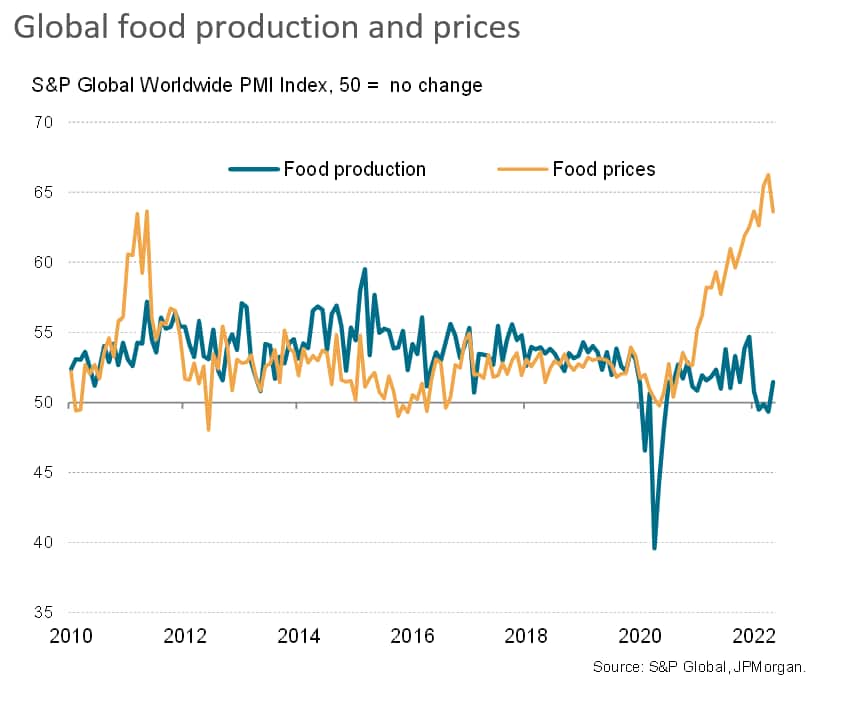