The worldwide manufacturing upturn persisted into September, with rising trade flows and the reopening of factories from lockdowns bringing growth to more countries in recent months, notably in Asia. The most striking of all was a surge in production in India, where output rose at its steepest rate since 2008 to lead the global rankings. The rise helped boost manufacturing growth in Asia, excluding China and Japan, to the fastest since March 2012.

Europe nevertheless continued to lead the manufacturing upturn, buoyed by especially strong gains in Germany and the UK. Growth also accelerated in the US and Canada.

The JPMorgan Global Manufacturing PMI, compiled by IHS Markit from its proprietary business surveys, rose from 51.8 in August to 52.3 in September, its highest since August 2018.

At this stage, it's important to remember that the PMI is derived from five key questions asked of over 15,000 companies globally, each of which is used to create an individual 'sub-index'. These sub-indices cover new orders, output, employment, suppliers' delivery times (an important gauge of capacity constraints) and inventories. The components are weighted according to their leading indicator properties to form the PMI. Hence new order inflows get the highest weight, followed by output, whereas inventories and employment are accorded the lowest weights, given these are typically considered lagging indicators.

The amalgamation of several sub-indices means the PMI provides a useful barometer of the overall health of the manufacturing economy.

However, the inclusion of lagging indicators such as inventories and employment means the cyclical signals can be muted or delayed. Furthermore, supply shocks, such as the unprecedented lengthening of delivery times seen due to factory closures at the height of the Covid-19 pandemic, can also cause misleading signals. In the case of Covid-19, the headline PMI signalled a more muted downturn than the output and new orders indices. 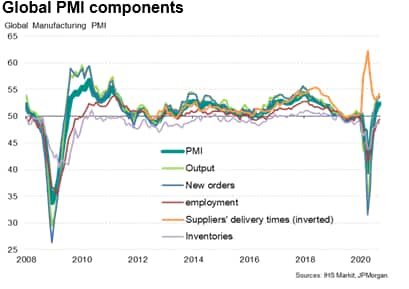 The low point of the PMI seen during the height of the pandemic for example was 39.6, reached in April 2020. However, the output index fell to 32.5 and the new orders index to 31.5. The output and new orders indices are also currently indicated a stronger rebound from the pandemic than the headline PMI. 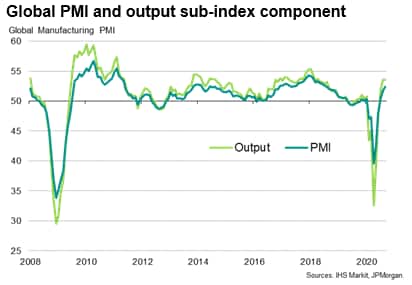 Hence, during the pandemic, we are focusing our analysis more on the PMI's output index rather than the headline PMI.

Production recovery sustained into September, but year-to-date remains one of steep downturn

In September, the PMI's output index registered 53.6, down marginally from 53.5 in August but still indicating a robust expansion of factory production. The average reading of 53.0 for the third quarter represents a strong rebound from an average of 39.7 in the second quarter, though growth clearly remains subdued. Given that readings of 50 indicate no change, the third quarter's expansion does not, for instance, offset the second quarter decline. Hence the average output index for 2020 so far, at 46.4, points to a sector that has been badly damaged by the pandemic. 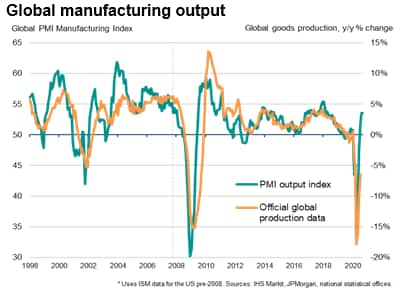 Only China and Brazil have seen output rise this year

As the national PMIs illustrate, so far this year only two of the 31 countries monitored for manufacturing conditions by IHS Markit - China and Brazil - have recorded average output indices in excess of 50, and even here the net expansions have been only modest.

The UK and Australia have meanwhile reported the weakest - though nevertheless still severe - downturns over the year to date as a whole.

The steepest downturns so far this year have been recorded in Mexico, Indonesia, the Philippines and Japan, followed by South Korea and Vietnam. That means five of the six fastest-contracting manufacturing economies have been located in Asia, causing the region as a whole to have markedly underperformed the rest of the world so far if China is excluded. 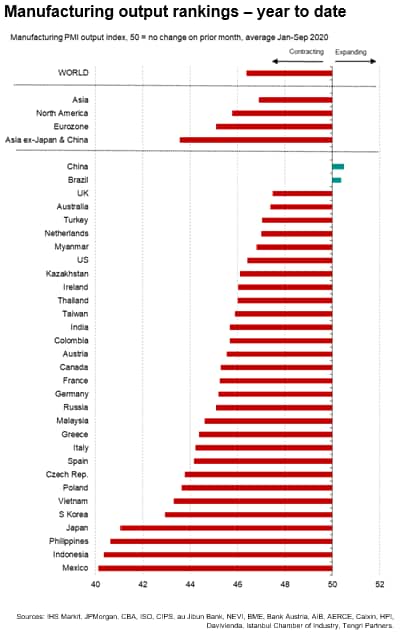 The recovery has broadened out in recent months, notably within Asia

Looking at the progress of recoveries in September, encouragement of the broadening out of the upturn was evident, as 25 of the 31 countries reported rising output, which was unchanged on the situation in August but up from 20 in July and 14 in June.

Importantly, while Asia excluding China has lagged the wider global recovery, growth in the region has strengthened as the third quarter has progressed, often attributable to improving global trade flows. Worldwide exports rose at the fastest rate for two-and-a-half years in September according to the PMIs. Output in Asia ex-China & Japan consequently rose in September at the fastest rate since March 2012.

India in fact reported the steepest rise in production of all countries in September, with growth spiking higher to the fastest since January 2008 and pushing Brazil into second place in the rankings table. Notably strong performances were also seen in Taiwan and Myanmar, with a marked rebound also evident in Vietnam.

Robust - though moderating growth - was meanwhile again seen in China but Japan remained firmly in contraction, albeit reporting the slowest rate of decline since February.

Strong performances were also reported in the UK, Germany and the Netherlands during September, the latter two helping to propel eurozone manufacturing growth to the fastest since February 2018 and meaning growth across Europe as whole exceeded that seen in North American and Asia.

Growth also accelerated to the fastest since last November in North America, accelerating in both the US and Canada to offset a steepening downturn in Mexico, which saw the sharpest contraction of all countries surveyed. 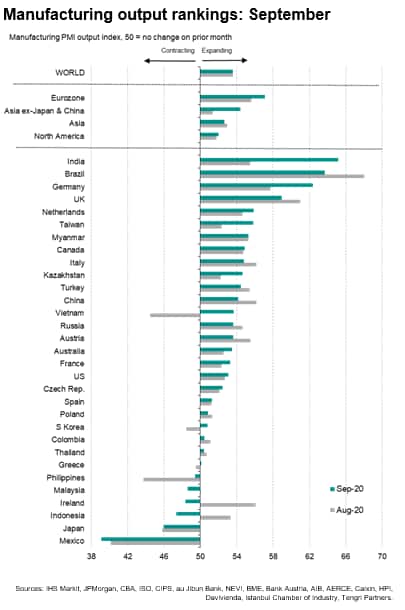 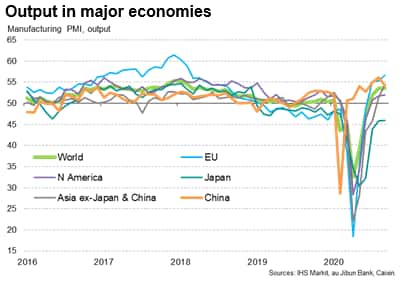