August research highlights include how the Inflation Reduction Act (IRA) policy will ripple through the global renewables sector, innovative approaches to financing as rates jump around the world, and policymakers' strain to fortify power supply as the Northern Hemisphere looks to winter.

On 16 August 2022, President Joe Biden signed into law the IRA. The landmark bill is the first multi-decade piece of legislation targeting dramatic long-term reductions in greenhouse gases via several targeted incentive programs supporting low-carbon technologies. Clients can see a comprehensive overview of the program and our outlook in our webinar, Implications of the US Inflation Reduction Act on Electric Power. (A public article on this topic is available here.) 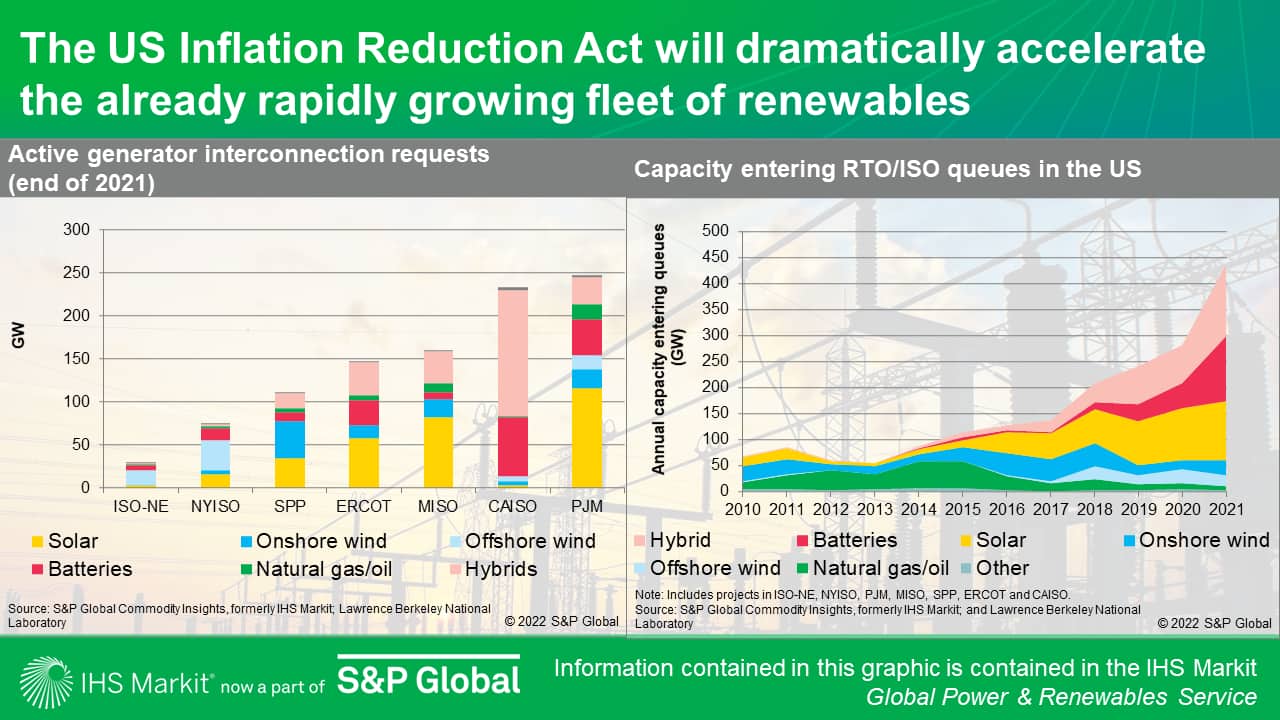 The IRA will dramatically lower the costs of mainstream renewables, most notably for solar via the shift to the more valuable production tax credit (PTC) versus the current investment tax credit (ITC) incentives. However, while the bill significantly expands long-term incentives for a larger portfolio of clean technologies, it leaves much of the hard work behind the scenes to regulators, who will have to significantly evolve market design to address challenges including negative pricing, curtailments, interconnection bottlenecks, volatile renewable energy certificate (REC) prices, and collapsing effective load-carry capabilities (ELCCs). Clients can view the detailed discussion in the IHS Markit Market Briefing Flood the system: The IRA is a regulatory nightmare that just might work - Power Market Edge.

Not only will the IRA dramatically accelerate conventional renewables additions, but it will also push forward the retirement of existing high-carbon generation assets. Of the remaining 201 GW of coal-fired generation capacity in operation, 50 GW has announced plans to retire by 2030. According to the IHS Markit Insight "Inflation Reduction Act will spark a new era for clean energy technology in the United States," the IRA could result in another 50 GW on top of the existing retirement announcements. It will also provide expanded long-term incentives for battery storage, nuclear power, clean hydrogen production, and carbon capture technologies.

The IRA incentives will be the core driver toward meeting the US emissions reduction targets of 50% by 2030 and net zero by 2050. According to the IHS Markit Strategic Report New Configurations: America's gas and power in net zero, the full effect of the IRA policies on our long-term planning scenarios will be incorporated into the next release, but the bill is certain to strengthen the energy transition trends that were already in place.

The COVID-19-related global supply chain disruptions, extreme weather events, rising inflation, and the Russia-Ukraine crisis have pushed the cost of capital to record highs. With interest rates expected to remain elevated in the near term, we take a look at global power markets' responses. 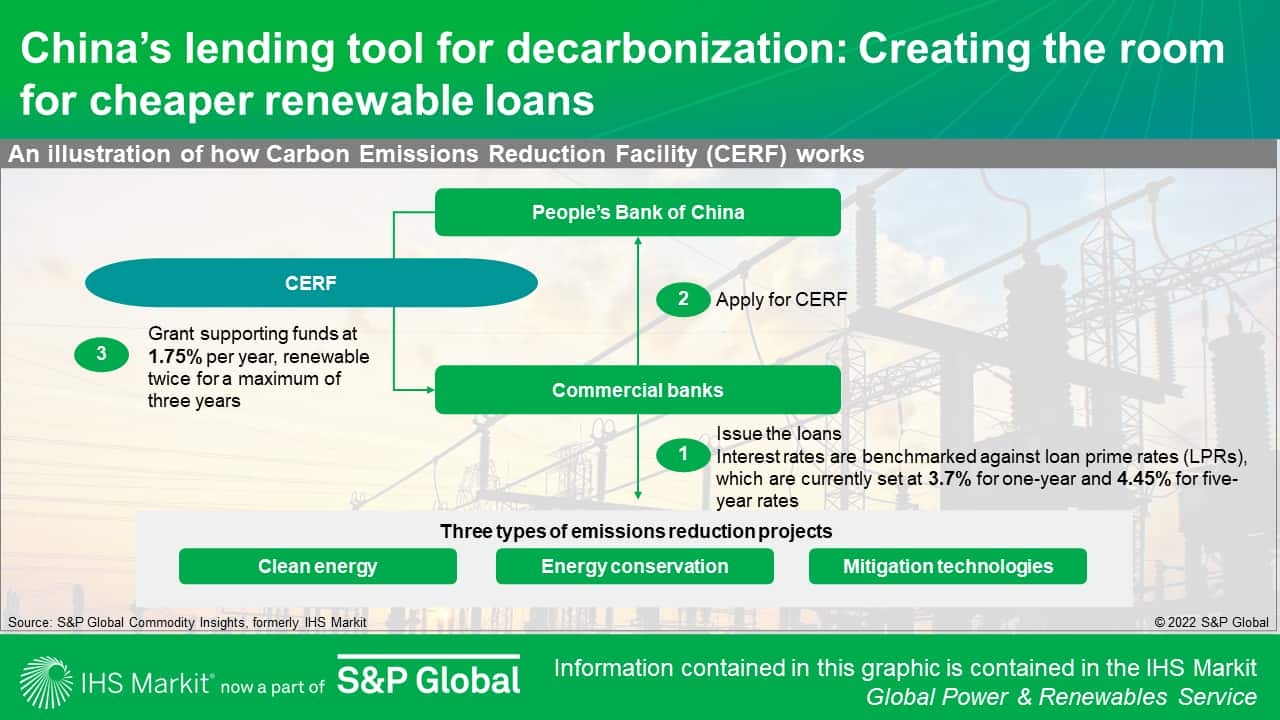 According to the IHS Markit client insight China's lending tool for decarbonization: Creating the room for cheaper renewable loans, the Chinese central bank has put forward the idea of a preferential interest rate for renewable projects, allowing commercial banks to issue developers government-backed renewable loans with below-average interest rates between 3.36% and 4.66%. The low interest rate will enable renewable projects previously lingering around breakeven to be lifted above the investment decision threshold.

In Latin America, significant investment resources have flowed to develop renewable energy over the past decade, but new strategies and market drivers will be in place for sustained renewable additions. According to IHS Markit expert video Latin America: Renewables keep up the pace amid growing economic uncertainties, Brazil, Mexico, and Chile led the additions of renewable projects through a combination of regulated auctions and energy policies. Other Latin American countries, including Colombia and Peru, are following a similar pathway. In the future, new mechanisms like corporate power purchase agreements and distributed generation are expected to be in place to maintain the pace of wind and solar development.

In South Asia, the increasing capital costs and fuel prices have led to short-term increases in the cost of electricity. On the other hand, according to the IHS Markit Market Briefing, South Asia Power and Renewables Capital Cost and LCOE Outlook, 2022-50, renewables will benefit from a range of drivers, such as technological developments and improved economies of scale, for further cost reduction. In the long run, the solar levelized cost of electricity (LCOE) will continue to reduce by an average of 2.2-3.9% annually. The LCOE in 2022 for onshore wind and solar photovoltaics (PV) will reduce by 45-65% by 2050. Increasing costs due to rising regional trade barriers and the current focus on local content are expected to be increasingly challenging for the renewables industry. The LCOE for conventional technologies varies in the range of $50-120/MWh and is primarily driven by capital costs, fuel prices, and utilization rates.

As the ongoing conflict in Ukraine drags on and the global demand for energy recovers to pre-pandemic levels, energy supply has become a front-and-center challenge for economies around the world. The unprecedented challenge of navigating supply chain bottlenecks, rising costs of capital, a tight supply/demand energy balance, emissions reductions, and geopolitical tensions is complicating the work of system planners and policymakers around the world.

Europe is at the front and center of the gas supply conundrum as it attempts to reduce exposure to Russian energy supplies and decommission both coal and nuclear resources, while making efforts to rein in uncomfortably high inflation. According to the IHS Markit Insight Russian gas crisis boosts Europe's "Fit for 55" ambition, Europe's "Fit or 55" framework, which had started to be developed in a much different market context, is likely to be strengthened further by the current set of challenges.

According to the IHS Markit Insight Winter is coming: Power shortages in France — can they happen?, France is expecting a complicated winter as for the first time in 2022. It has found itself a net importer of power. A combination of low nuclear availability, dry hydrological conditions, decommissioned coal, and supply uncertainty for its thermal fleet have few quick fixes available to bring online the sidelined additional supply. Meanwhile, importing power from neighboring countries may not be an option owing to their own power supply concerns. (Full report is available for clients 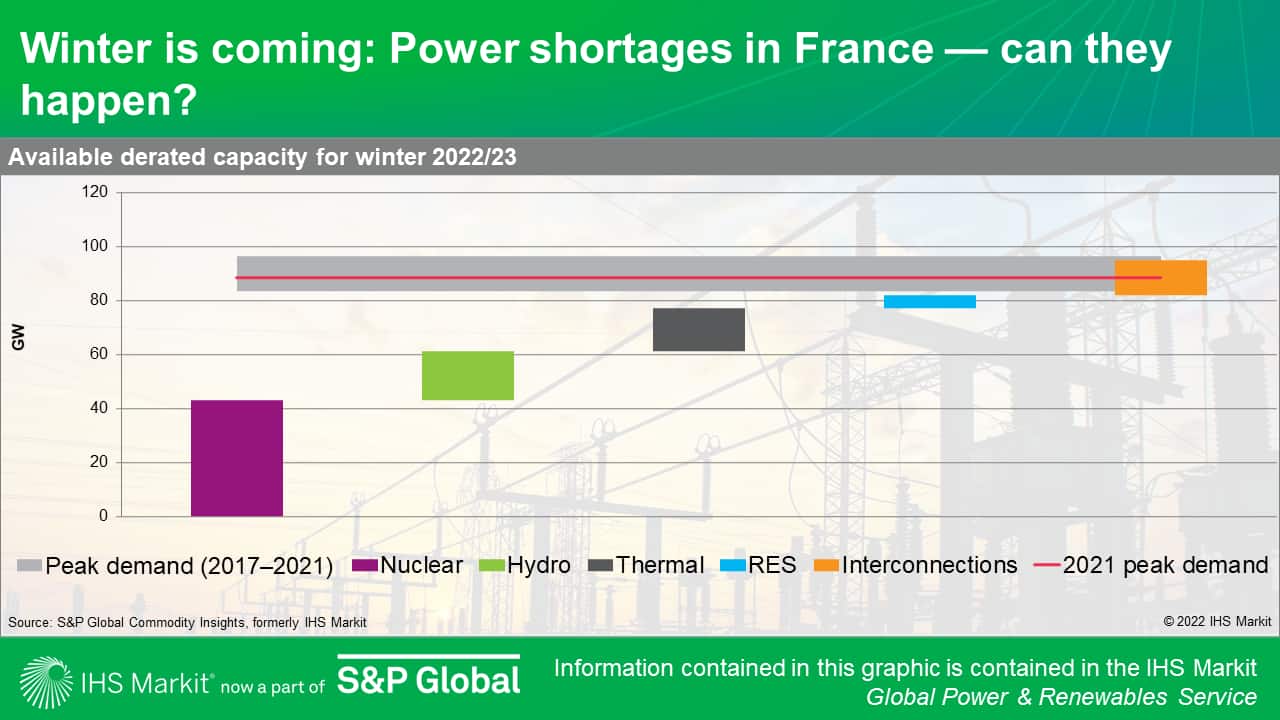 Europe is far from the only region feeling the energy supply crunch. According to the IHS Markit Strategic Report Securing gas supply for Southeast Asia's energy transition, high-growth markets in Southeast Asia will depend on LNG and domestic gas development not only to fuel their growing economies but also to rapidly replace coal-fueled power as many markets establish net-zero goals. Intense competition for LNG cargoes will come at a significant cost and could weigh on demand growth.

As Pakistan starts on the road to recovery from the most severe flooding in recent history, it will also have to grapple with difficult challenges to meet its rapidly growing power demand. According to the IHS Markit Market Briefing Pakistan Market Briefing: First half 2022—Gas crunch continues amid political turmoil, with nuclear and oil surging to fill the gaps in hydro and coal output, coal, hydro, and gas all lost share in the generation mix, but the growing use of oil and a significant boost in nuclear output were able to more than offset those declines. Power infrastructure was severely impacted by the recent floods, and it could be a long road to build back sufficient generation infrastructure to meet demand.

Meanwhile in China, surging cooling demand during a prolonged heat wave combined with drought in China's largest hydro generating region led to power rationing as industrial consumers were asked to ramp down production to prioritize residential consumers. According to the IHS Markit Insight Dual extremes led to severe power shortage in Sichuan, China, cooler weather heading into autumn will provide some short-term relief. However, there are concerns that hydro reservoirs will not recover fast enough to meet the upcoming winter peak.

Qingyang Liu is a research analyst with the Global Power and Renewables team at S&P Global Commodity Insights.