Russia-Ukraine implications and the energy transition

April reports summarized the implications of the Russia-Ukraine crisis for global power and renewables and offered a deep dive into the energy transition.

As the Russia-Ukraine conflict continues to rage, global energy markets are witnessing unprecedented volatilities. The power and renewables sector is no exception. On the back of already tight global fuel markets from last year, the conflict has pushed spot coal and gas prices to record highs, making wholesale power prices skyrocket around the world. The crisis also prolonged global supply chain disruptions and instigated new energy security concerns.

According to the IHS Markit Insight "Russia-Ukraine crisis: Implications for global power and renewables", coal and gas markets are expected to remain tight in the near term, continuing to pressure power prices. While the situation is particularly acute in Europe given its dependence on Russian fuel imports, the impacts are being felt globally—albeit to varying extents depending on regional exposure to spot fuel markets. Sustained tight fuel markets, in turn, challenge power system reliability, with supply disruption risks expected to be higher in markets such as South and Southeast Asia where affordability is a concern. In the short term, the focus on energy security could translate to higher coal and nuclear generation, but in the medium to long term, there will likely be a push to accelerate the energy transition and reduce fossil fuel dependence—although the pace of transition will likely be different in different regions. 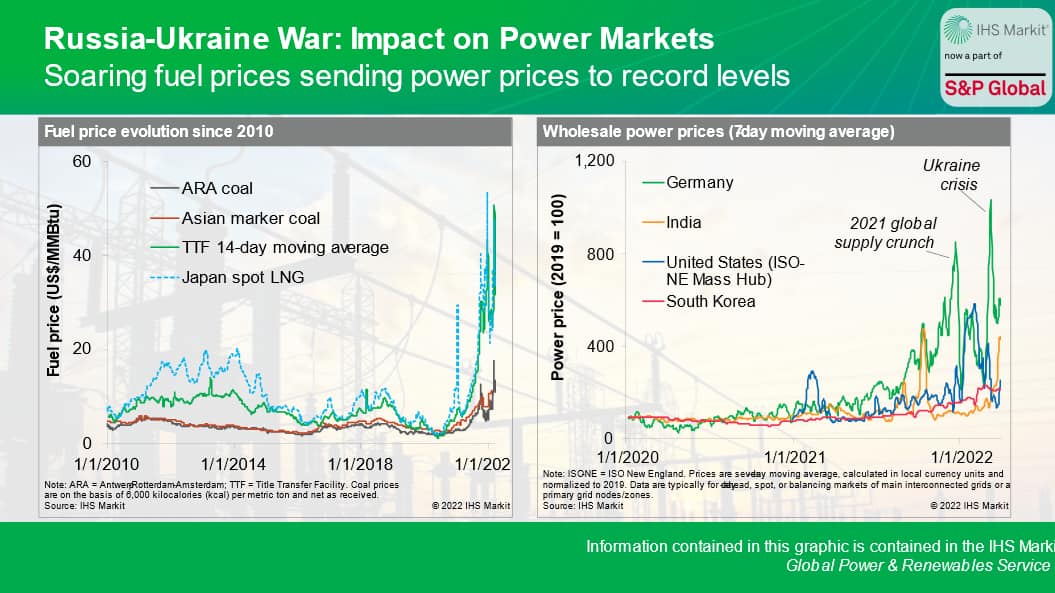 According to the IHS Markit Strategic Report "Russia-Ukraine crisis: Implications for cleantech", the Ukraine conflict has also renewed supply chain risks for clean technologies, as Russia is a significant producer of critical materials used in wind, solar photovoltaics (PV), and battery storage. In 2021, raw material prices increased by 10-20% compared with the previous year, owing to the global supply chain crisis. While costs are projected to increase by an additional 5-10% in 2022, the impacts are anticipated to be temporary and clean energy supply chains are expected to remain resilient. A more lasting impact of the war would be increased regionalization of supply chains.

In India, a basic customs duty on imports of solar modules and cells was introduced in April 2022, to help reduce the country's dependence on imports and promote domestic manufacturing. According to the IHS Markit Insight "Balancing act: India's opportunity to scale manufacturing while tackling supply chain disruption", the ongoing global supply chain disruption, combined with the local domestic manufacturing policies, is creating short-term risks for wind and solar projects. While the push for local solar manufacturing might undermine short-term additions, local manufacturing incentives are expected to expand the country's solar production capacity in the next five years.

Despite the Ukraine conflict, countries around the world are making progress on energy transition policies, to varying extents, while also keeping supply security and economic growth top of mind.

The IHS Markit Strategic Report "Peak coal in Asia by 2027 as energy transition begins: Two sides of the coin" assesses the situation in Asia, finding that coal will continue to play a role in the region's power mix in 2050. According to the report, each market is exploring a bespoke way for its energy transition away from coal—with coal capacity and generation in the region expected to peak around 2027. At the same time, supply security and affordability are fundamental to support the region's robust economic growth. While aggressive renewable builds and growth in natural gas will help meet Asia's growing demand, 18% of generation in 2050 is projected to come from coal, although part of it will be equipped with carbon capture and storage (CCS). Alternative low-carbon fuels, cofiring with zero-carbon fuels, and CCS will be heavily relied upon to offset remaining coal emissions and meet the region's climate commitment. 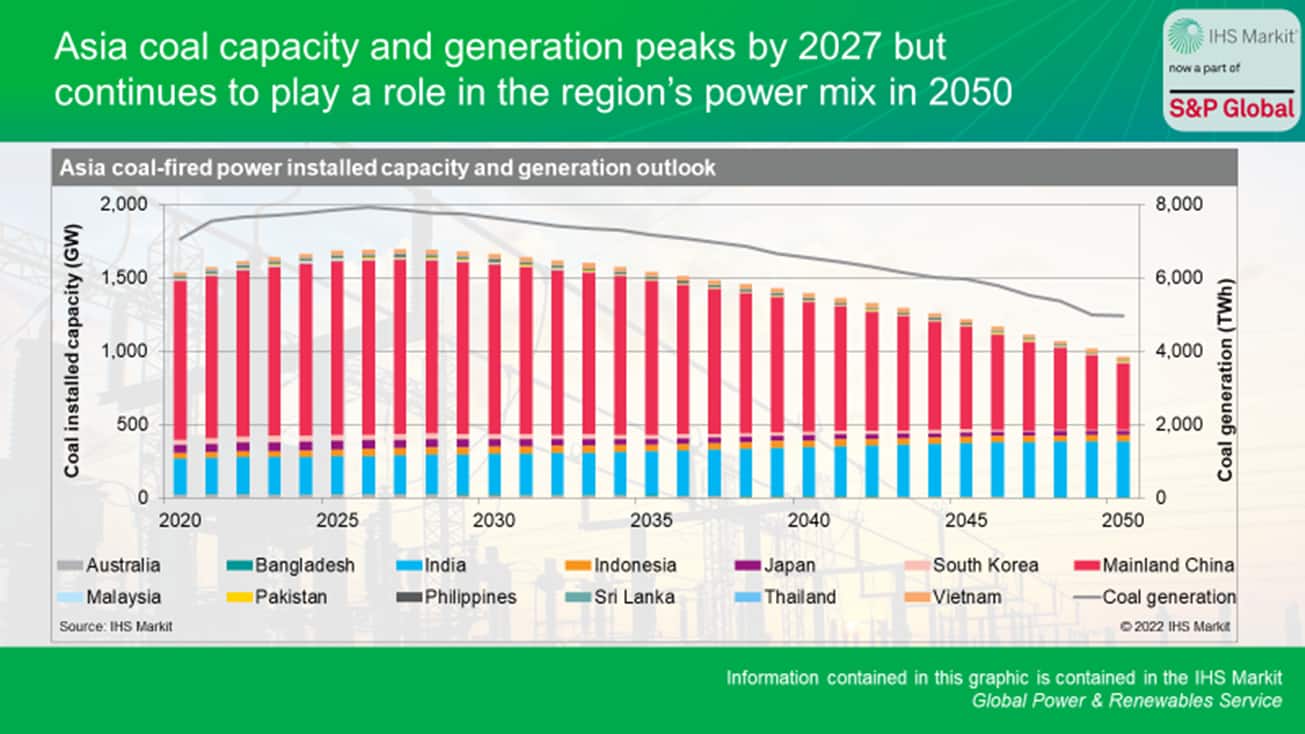 In mainland China, recent policies signal modest relaxation of the market's implementation of the energy consumption "dual-control" scheme. According to the IHS Markit Insight "China refines dual-control scheme: Tilting the balance toward economic growth", mainland China has not set a binding energy intensity reduction target for 2022, nor a nonbinding national cap on total energy consumption for the 14th Five-Year Plan. This will give provinces more room to set and adjust their own targets to better accommodate local development needs and ensure energy consumption control does not come at the expense of sacrificing economic growth. At the same time, mainland China will continue to tighten its efficiency control over energy-intensive industries as part of its efforts to achieve carbon pledges.

In Taiwan, the National Development Council unveiled the market's roadmap for 2050 net-zero carbon emissions in late March. According to the IHS Markit Insight "A big step toward net-zero in Taiwan", while the roadmap is a laudable move for Taiwan, it raises several feasibility questions. Reaching the 2050 renewables penetration target of 60-70% will be challenging, and despite the expected growth in pumped storage, an energy storage target remains a missing piece of the roadmap. Given technical lifespans, possible lower-than-expected renewables share, and diversification pursuits, Taiwan might have to retain some coal-fired generation as backup.

In Southeast Asia, according to the IHS Markit Market Briefing "Southeast Asia Power and Renewables Market Briefing: Southeast Asia on track for strong but uneven power demand growth amid unexpected supply bottlenecks, April 2022", Indonesia is also stepping up its ambition to achieve net-zero emissions by 2060, although concerns linger over execution. Thailand is ramping up its renewables share to 50% by 2050, and, after several amendments to its draft Power Development Plan (PDP8), the Vietnamese government has targeted April 2022 for approval of the plan.

In India, plans for a national carbon market are being deliberated at the ministerial level. The IHS Markit Insight "In the race to global net zero, what are the lessons for India's carbon market?" examines India's national carbon market blueprint in light of domestic and international experiences with cap-and-trade‒based markets and offers key takeaways and potential solutions to challenges.

In OECD Asia, according to the IHS Markit Market Briefing "OECD Asia Power and Renewables Market Briefing—First quarter 2022", Japan's 6th Strategic Energy Plan comes into effect in April 2022, paving a stronger pathway for renewables. And while South Korea's Sustainable Finance Taxonomy (K-Taxonomy) Guideline in December 2021 included LNG as a transition sector, nuclear will likely become a part of the K-Taxonomy in the next update, given newly appointed President Yoon's strong emphasis on the role of nuclear power. In Australia, the National Electricity Market five-minute settlement commenced operation in October 2021, increasing arbitrage opportunities for fast-response generators—with net revenues from the wholesale market for battery storage systems reaching a record A$4.5 million in the fourth quarter of 2021. Also at the end of last year, the Australian Parliament passed the Offshore Electricity Infrastructure Act, paving the way for the development of offshore renewable energy and transmission infrastructure.

Hydrogen is also a key element of Australia's energy strategy to improve supply security and advance decarbonization, while spurring economic growth. In March 2022, the Morrison government released the 2022-23 federal budget, which includes A$1.3 billion in new investments for low-emissions technologies, such as hydrogen. The country is already making progress toward its goal of becoming a global supplier of clean hydrogen by 2030. According to the IHS Markit Insight "Australia Hydrogen Market Tracker", Australia's project pipeline now sits at 120 hydrogen-related projects and 30 economic development zones.

According to the IHS Markit Market Briefing "Middle East and North Africa Power and Renewables Market Briefing", Middle East and North Africa countries are also embracing new low-carbon agendas and ambitions for the hydrogen sector, with several countries aiming to become low-carbon hydrogen exporters. This is expected to increase regional power demand and renewables capacity by 40% by 2050. In the United Arab Emirates (UAE), nuclear is also an important element of the country's clean energy strategy and 2030 self-sufficiency target for natural gas. According to the IHS Markit Insight "Nuclear as a net-zero accelerator in the UAE", commercial operation of the second reactor train at the Emirates Nuclear Energy Corporation's Barakah nuclear plant began in March 2022—doubling nameplate capacity to 2.8 GW. All four reactors are expected to be online by 2024, when they should account for over 20% of the integrated Abu Dhabi and Northern Emirates generation capacity and close to 40% of electricity generated.

In Chile, an ongoing drought, alongside global supply chain disruptions and the global LNG supply crunch brought on by the Ukraine conflict, is putting supply security at risk. At the same time, the country is moving forward with accelerating the clean energy transition, which will help reduce dependence on fuel imports. According to the IHS Markit Insight "Chile proposes new policies to quicken renewable energy deployments", the new National Energy Policy of Chile is the government's latest policy attempt to push clean energies further. Chile is expected to record 4.5 GW of wind and solar additions in 2022—a new record for a country already several years into a renewables boom. Green hydrogen is also an important pillar of the country's energy strategy. The government's National Green Hydrogen Strategy calls upon the country to have 5 GW of electrolysis capacity under development by 2025 to produce the cheapest green hydrogen in the world by 2030 and to be among the world's three largest hydrogen exporters by 2040—already 18 GW of electrolyzer input capacity is under study.

In the United States, however, the view at the national level is murky at best. According to the IHS Markit Insight "Will there ever be a comprehensive US decarbonization policy?" existing carbon policy is still a patchwork of mostly state and some federal programs, with broad but not universal corporate buy-in. In aggregate, these programs provide a foundation for significant decarbonization of the US power sector but are likely to achieve only modest economywide reductions. With the original Build Back Better legislation stalled in the Senate, the current debate at the federal level has evolved to focus on the climate and clean energy portions of Build Back Better, which are primarily tax incentives. While there is broad industry support for such a carve-out, a growing number of intersecting global issues—including war, inflation, commodity price volatility, food shortages, and supply chain disruptions—will likely continue to occupy policymakers' attention, pushing longer-term concerns like climate change to the background.

At the state level, California has been among the leading states in advancing a clean energy agenda. State regulators are calling for an unprecedented level of investment in new sources of clean firm power to address the state's near-term reliability needs while also advancing its decarbonization ambitions. The IHS Markit Strategic Report "Battery influx poised to drive up resource adequacy costs in California" examines the recent surge in battery energy storage systems in California and implications for resource adequacy costs, offering lessons for other regions that follow a similar path.

Learn more about our global power and renewable energy research.