Global Power and Renewables Research Highlights, March 2022: A look back and ahead

Recapping the year 2021 for global power and renewables

In 2021, the world economy rebounded amid the continued stresses of the COVID-19 pandemic, global supply chain disruptions, several extreme weather events, and a global energy supply crunch. According to the IHS Markit Insight "A year of crises and rebounds: Six graphics that show the impacts of economic instabilities on global power markets in 2021", global power consumption, which had slumped in 2020 owing to pandemic-induced restrictions, rode the wave of a global economic rebound. Global power generation increased by 6.5%, compared to 2020, with coal being the big winner of the supply rebound. Most of the coal surge occurred in the Asia Pacific region—driven primarily by China and India—followed to lesser extents by North America and Europe. Meanwhile, wholesale power prices, which had often declined in 2020, experienced sharp jumps in 2021 due mainly to the global energy crisis and inflation. Fuel price spikes and supply chain disruptions, including for the supply of raw materials, fed the surge in power costs. Power price volatility also increased in 2021 owing largely to global fuel supply disruptions, extreme weather events such as Winter Storm Uri in Texas, and underinvestment in infrastructure. With the surge in coal use, global power sector carbon dioxide emissions also grew at a record rate in 2021. 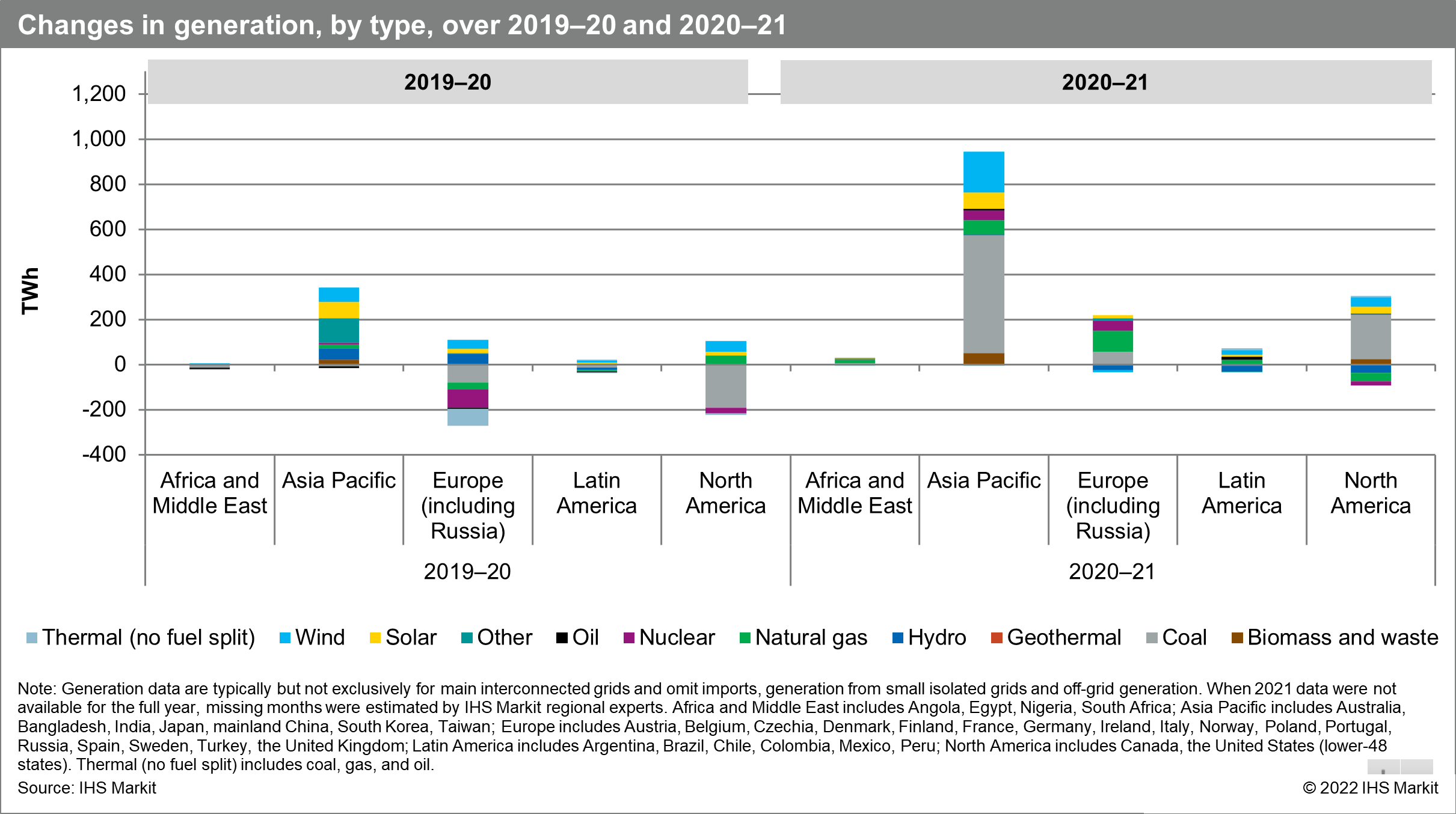 Following Winter Storm Uri, the Texas public utility commission has been focused on implementing reforms to the state's electric industry. According to the IHS Markit Insight "ERCOT braces for record-breaking electricity demand this week", to avoid a repeat of the extremely high prices that occurred during the storm, the commission lowered the systemwide offer cap—from $9,000/MWh to $5,000/MWh—and reformed the scarcity pricing mechanism by modifying the shape of the underlying Operating Reserve Demand Curve to shift more of the energy market revenues to nonscarcity periods. The cold weather and record peak electricity demand forecast in early February 2022 was the first major test of the electric grid since those scarcity pricing reforms were implemented.

Meanwhile, amid the economic instabilities and challenges of 2021, clean energy investments continued. Based on the IHS Markit Market Briefing "Europe Renewable Power Market Update: Second half 2021", many European markets increased their renewable ambitions in 2021 and a record volume of 42 GW of renewables is expected to be auctioned in 2022. According to the IHS Markit Insight "Global Power and Renewables Company Strategies: Investors pick up M&A pace to close the year", deals for clean generation portfolios by players such as Eneos, Koch, and BP highlight that even the most committed conventional energy players have found value in diversifying their portfolios. Established global renewables leaders such as Acciona, EDPR, and RWE also made significant moves to jumpstart growth via international expansion, and institutional investors continue to acquire both operating and development clean generation assets as they launch multiple new clean technology-focused funds. The offshore wind segment is also driving multiple new JVs and partnerships as a diverse set of players target growth opportunities in several new markets while hydrogen is attracting major investments as first movers seek to establish infrastructure hubs.

Looking ahead: Short and long term

Despite the uptick in clean energy, the investment mismatch challenges between conventional and clean energies that underpinned the 2021 global energy crisis are expected to continue. Investment in the supply of conventional energies is expected to continue to decline, falling behind the level of demand for these energies, but investment in new and renewable technologies is not yet measuring up to the supply of low-carbon energy that the climate agenda requires.

According to the IHS Markit Strategic Report "Europe's gas and power crisis: Today's fears and tomorrow's plans", serious questions for Europe in 2022 revolve around its relationship as a major importer of gas with its suppliers, both in the LNG market and in supply of pipeline gas from Russia, and whether the fundamental design of Europe's electricity market is adapted to the climate ambitions and needs of the future. According to the IHS Markit Insight "Europe's energy market: Torn between cost and climate", affordability will also be a major concern in Europe in the short term as gas and wholesale power prices remain at a premium to historic levels. At the same time, climate ambitions will remain high and tensions between climate and practicality will build, as evidenced by discussions on the EU taxonomy proposal. While renewables will provide the bedrock of tomorrow's power markets, a wide range of technologies will be required to ensure security of supply. In 2022, decisions are expected to kick off investments in floating offshore wind, hydrogen, carbon capture and storage, and nuclear. While the taxonomy laid bare the divisions within Europe on the value of nuclear, several countries' decarbonization strategies rely on it. The United Kingdom and France, for example, are expected to launch new nuclear projects in 2022 while Germany will shut its remaining nuclear capacity.

Nuclear has also been a primary area of debate in South Korea. According to the IHS Markit Insight "South Korea's presidential election: Nuclear takes center stage in the energy agenda", the two leading candidates in South Korea's presidential election outlined different visions for the country's energy future. While the ruling Democratic Party's candidate aimed to bolster current climate ambitions and maintain the current policy notion of phasing out nuclear, the opposition People Power Party's candidate intends to pull out all the stops to revive the country's nuclear industry.[1] In Japan, the 6th Strategic Energy Plan, which targets increasing the share of nuclear to 20-22% of the power mix by 2030, is due to be implemented in April 2022. According to the IHS Markit Market Briefing "Japan Nuclear Status Tracker", after a slowdown in 2020-22, nuclear restarts are expected to boom again from 2023 onward.

Meanwhile in Latin America, according to the IHS Markit Insight "The five big questions facing Latin American gas and power markets in 2022", power markets are likely to evolve differently across the region depending on economic recovery—enabled by higher vaccination rates in many Latin American countries—and key policy changes resulting from ongoing governments' energy policies and elections. For example, Mexico—a country that has once been a top market for renewables—is currently discussing a new constitutional reform that might dissolve the bulk market mechanisms brought by the energy reform of 2013. On the contrary, Chile continues to push its green agenda, and despite its recent change in presidency, initial signposts point to a continuation of its clean power sector policy. At the same time, the ongoing tight gas market situation around the world could severely affect countries in the region as natural gas becomes the fuel of choice to balance power markets that are dependent on hydro generation and/or an increasing share of nonhydro renewables.

In Sub-Saharan Africa, according to the IHS Markit Strategic Report "Africa Energy and Economy Review and Outlook (2021-2022): A time of transition to an uncertain destination", power demand is also expected to continue to grow in 2022 but at a slower pace than in 2021, while still remaining on average less than 500 kWh per capita—among the lowest levels worldwide. Diversification of energy sources away from oil and coal to gas and renewables will also gain momentum, in line with energy transition objectives, although at different speeds across the region depending on each country's power supply gap versus growing power demand, financing availability, and the need to provide reliable power. At the same time, chronic bottlenecks in the global supply chain are expected to continue to impact renewable projects in the near term, challenging initiatives to increase energy supply and access, and to diversify the energy supply mix.

In the longer term, according to the IHS Markit Scheduled Update "Global Power and Renewable Market Outlook, February 2022", nonhydro renewables are projected to account for more than 95% of new power generation capacity globally, becoming the dominant source of power and representing 50% of power generation by 2050 globally. Coal generation will be in net decline everywhere, except in India, while gas is expected to continue to play an important role.[2] Solar and wind will represent almost all new renewable additions with offshore wind growing fast. Energy storage, which represents a critical source of flexibility, is also expected to grow strongly while increasing demand for green hydrogen becomes a major driver for further renewable additions. Investments in renewables, storage, and green hydrogen will continue to increase, with growth driven by Asia and Europe, at an estimated annual pace of $440 billion. 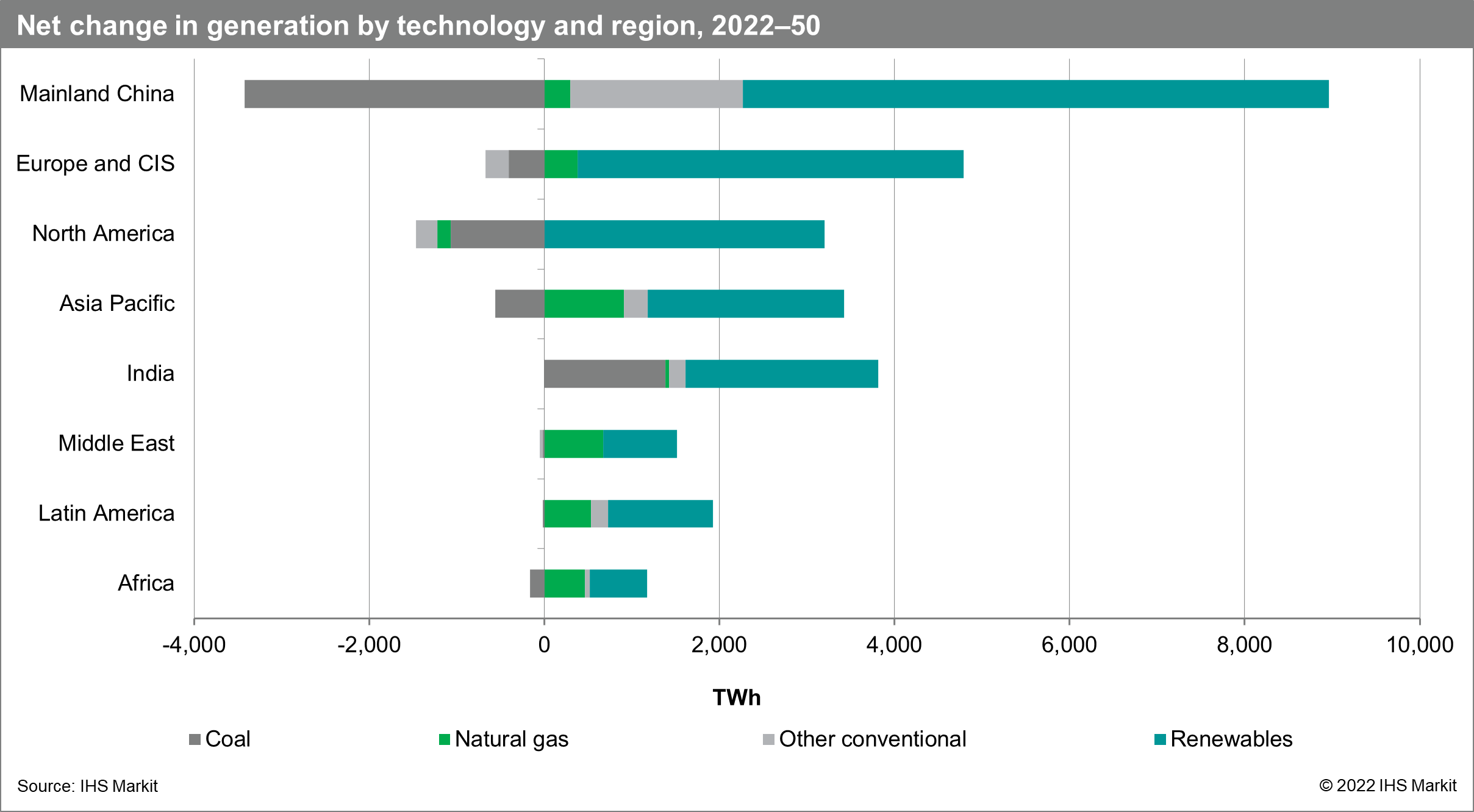 Learn more about our global power and renewable research.