May reports highlighted the power crisis in South Asia, Europe's efforts to mitigate the impacts of the Russia-Ukraine conflict, and the continued growth in renewables.

South Asia is facing an energy crisis with power cuts of more than 12 hours in Sri Lanka and Pakistan; rationing of coal and natural gas to industries in India, Pakistan, and Bangladesh; and price spikes and supply shortages of petrol/diesel and natural gas impacting transport and household sectors across the region. According to the IHS Markit Insight "Looming energy crisis in South Asia: Global energy crisis and economic/political discord adding to the woes", the power crisis is a result of legacy issues of policy-induced operational inefficiencies, worsened by the prolonged tightness in the global fuel market due to the Russia-Ukraine conflict. With South Asia vulnerable to global fuel markets, the situation is expected to worsen in the short term as costs and supply deficits in electricity are likely to exacerbate in the summer.

In India, extreme weather is impacting parts of the country, recording the warmest season in over 100 years. According to the IHS Markit Market Briefing "India facing widespread load shedding, frequency violations, and high electricity price", electricity demand grew by an average of 8.6% over March-April. While coal supply to the power sector grew 8.7% over January-April 2022, this was not sufficient to match growing demand. As a result, coal stocks are deteriorating, despite an increase in imported coal, and power shortages are impacting many states. Owing to constraints in domestic coal supply, the system is utilizing other generation options including oil/naphtha. There has also been an increase in nuclear and hydro generation, while gas-fired generation continues to decline owing to high LNG prices. The government has taken various steps to improve the coal supply situation in the short term. 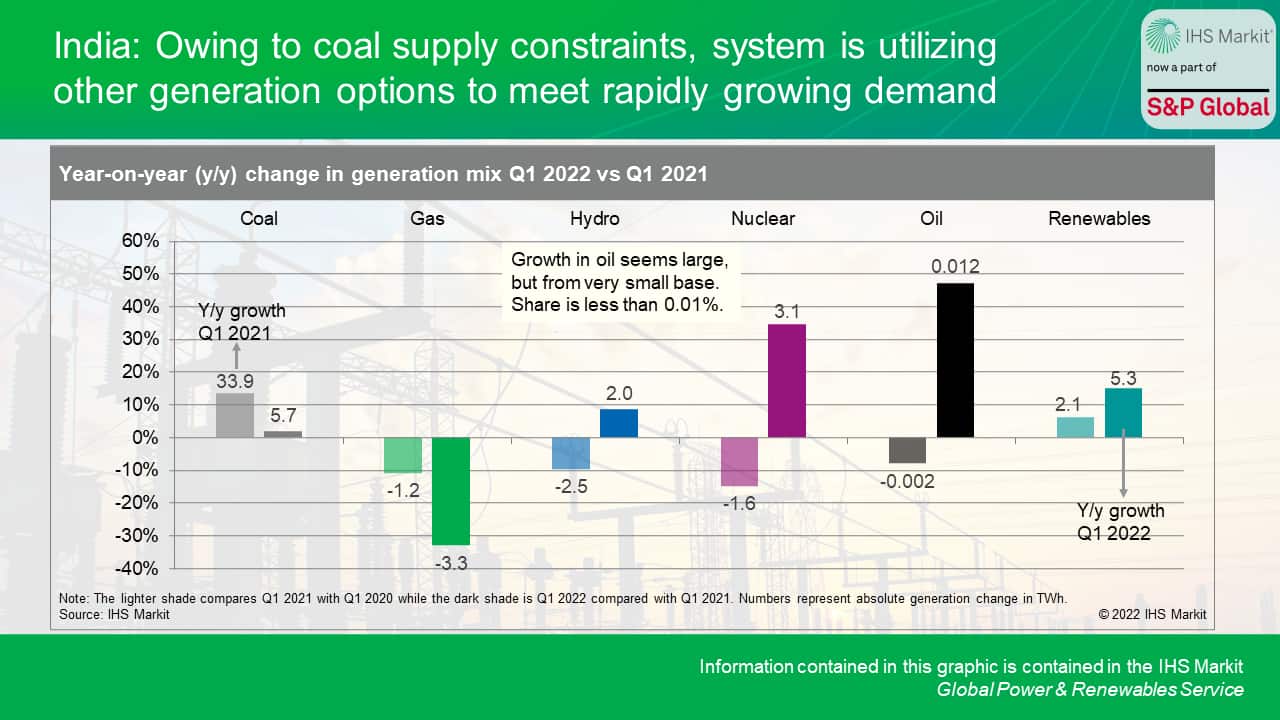 In Europe, the Russia-Ukraine crisis has triggered a reorientation of strategy. On 18 May 2022, the European Commission issued its REPowerEU plan, which follows a much less detailed document published in early March, reiterating the EU commitment to end Russian gas imports by 2027 and focusing on a faster energy transition as a key mechanism to achieve this.

The IHS Markit Insight "REPowerEU: Europe maps faster decarbonization to phase out Russian gas" delves into the details of the plan. According to the report, the European Commission has directly edited several of the proposed directives of the Fit for 55 package to include higher targets for renewable energy and energy efficiency, a rooftop solar mandate, and maximum allowable permitting timescales for renewable projects. The supply-side of the REPowerEU plan repeats the initial March document target for LNG and pipeline imports from suppliers other than Russia and adds higher energy efficiency ambition and fuel switching. REPowerEU also forsees massive growth in renewable hydrogen use by 2030. Successful implementation of the plan will depend not only on further action at the EU level but on specific actions taken at the member state level.

Given the recent electricity price spikes and associated affordability concerns, there is now increased appetite in Europe for regulatory intervention. According to the IHS Markit Insight "Europe's energy markets: Intervention in the short term but no change of market design", the second REPowerEU communication and the Agency for the Cooperation of Energy Regulators report on market design confirm the value of short-term intervention in the gas and power retail and wholesale markets, while maintaining market design in the long term. While some proposals-such as consumer empowerment and higher wholesale power market liquidity-were included in past legislation, other proposals-such as price caps, windfall taxes, and subsidies to generators-reflect a change in the EU mindset. Proposed measures, however, offer a fix to the symptoms, not the root cause, which may lead to unintended consequences.

The European Union is also reviewing the rules for the European carbon trading scheme (ETS) out to 2030. The IHS Markit Insight "Europe's gas crisis—Commitment to the ETS remains strong despite high energy prices" investigates the risk to reform with affordability now being top of the agenda. According to the report, Europe views the current affordability crisis as confirmation that imports of fossil fuels must be reduced and the ETS must remain in place to deliver this ambition. As such, there is little doubt that Europe will agree to a higher ambition for the current ETS. The affordability crisis, however, may hold back extension of the carbon market to buildings and transport, which would impact small consumers directly.

In Germany, the government has drafted policies that drastically increase renewables ambition while specifying a willingness to cut natural gas imports as soon as possible. The IHS Markit Insight "Germany accelerates energy ambition amid market crisis" breaks down the country's recent energy policy developments. According to the report, the short-term imperative to reduce imports of gas from Russia requires investment in gas infrastructure through the development of Germany's own direct LNG import industry, which goes against the longer-term ambition of cutting fossil fuel demand in the power sector by 2035 and in the entire economy by 2045.

According to the IHS Markit Insight "Impact of the invasion of Ukraine on emissions in Europe", the Russia-Ukraine crisis and Europe's response are anticipated to drive down carbon emissions faster than expected pre-war throughout this decade, as the reduction in emissions from lower demand exceeds the increase from additional coal generation. However, there is a risk that—particularly in the middle of the decade—emissions start to rise if energy efficiency measures and renewable additions fall short of expectation and coal remains the preferred form of dispatchable power generation in Europe.

Despite supply chain bottlenecks and higher prices, renewables continued to grow in many markets around the world—registering record highs in some instances.

In China, the Omicron outbreak since the beginning of 2022 has severely disrupted economic activities and energy demand, leading to weak fossil fuel demand while renewables continued to boom. According to the IHS Markit Insight "China's energy markets during latest COVID-19 lockdown: Coal and gas plummet while renewables flourish", coal and gas generation in April declined by 11% and 29%, respectively, while wind and solar generation increased 15% and 25%, respectively, with record capacity additions expected this year—as a result of high coal and gas prices as well as strengthened climate policies. Coastal regions in China—namely Jiangsu, Shanghai, and Hainan—also recently published rules for competitive allocation of their respective offshore wind resources. According to the IHS Markit Insight "New rules for offshore wind resources' competitive allocation gradually unveiled in China", these newly unveiled rules will decide the development rights for more than 27 GW of offshore wind capacity, out of which 19 GW is aimed for commissioning by 2025. While capital strength and installed capacity remain important in evaluating developers' competitiveness, new dimensions such as the developer's fulfillment record and owning scalable, flexible capacity in the region were added.

In Europe, signed power purchase agreement volumes continue to rise. According to the IHS Markit Insight "Europe's power purchase agreement (PPA) market grows, driven by increased corporate appetite", PPA volumes delivered in 2022 have doubled since 2020, with just under 6% of wind and solar production in the EU+3 under a PPA contract and a handful of mature markets, including Spain and the Nordics, accounting for the majority of deals. Corporate PPAs accounted for 62% of the energy contracted in 2021 and now outweigh utility deals.

In the United States, the California Independent System Operator (CAISO) and the Southwest Power Pool (SPP) announced record levels of instantaneous renewable penetration in early spring 2022. According to the IHS Markit Insight "CAISO and SPP provide glimpses of low-carbon power systems with renewable generation records", 97.6% of CAISO load was supplied by renewables at one instance on 3 April 2022, and in SPP, renewable penetration reached 90.2% in the early morning on 29 March 2022. These short-lived records offer real-life examples of what power systems could look like in a low-carbon future dominated by renewables. While variable renewable resources can supply most electrical energy when they are available, completely displacing dispatchable fossil generation will require alternative carbon-free flexible and firm capacity to balance the variability of renewables. Although nuclear can consistently provide carbon-free electricity, it faces lower energy revenues when renewables dominate the dispatch stack in competitive markets and would require additional revenue streams. Exports can also help facilitate higher renewable penetration levels. 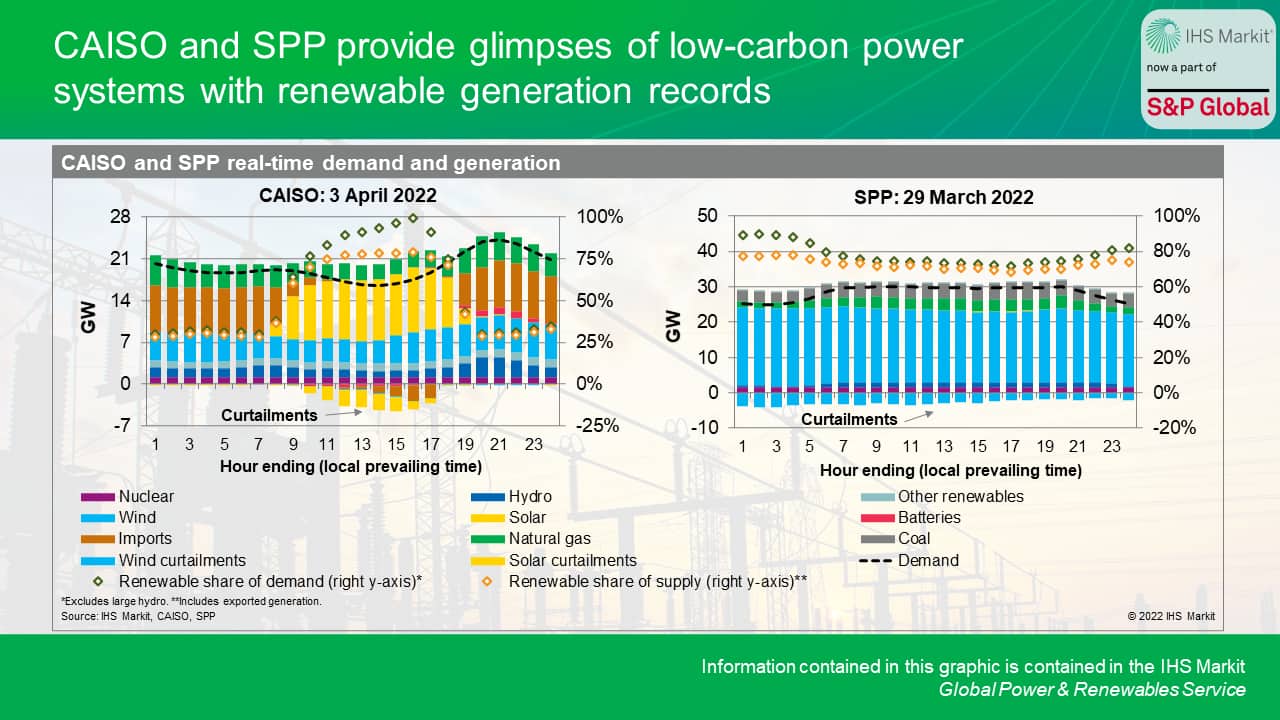 In New York, the independent system operator (NYISO) began considering carbon pricing in 2018, to harmonize state public policies with wholesale electricity markets and reduce reliance on out-of-market payments. While NYISO's carbon pricing proposal has stalled over the past years, carbon pricing remains one of the mechanisms under consideration by the state's Climate Action Council to help meet its goal of a zero-carbon grid by 2040. According to the IHS Markit Insight "Carbon pricing in New York would increase wholesale market prices while reducing REC prices", a carbon price based on the social cost of carbon would elevate wholesale power prices by 40-45% and reduce—but not eliminate—required renewable energy credit payments. Carbon pricing could drive an increase in renewable generation and contribute to 20% emission reduction beyond existing policy mechanisms.

In Latin America, renewable deployment is projected to grow in most markets, with green hydrogen becoming an important driver of renewable capacity additions in markets such as Brazil, Chile, and Columbia. According to the IHS Markit Data "Latin American Power Outlook: Southern Cone, May 2022", in Brazil, wind and solar are forecasted to add on average 4.2 GW per year each from 2022 to 2050, accounting for 55% of total additions over this period. In Chile, over 3 GW of wind and solar is under construction and expected to come online during 2022-23. Chile's rapid deployment of renewables is leading to calls for new clean energy targets of 25% of demand met by renewables by 2025 and 40% by 2030. According to the IHS Markit Data "Latin American Power Long-Term Outlook: Andean region", solar is increasingly gaining market share in Columbia and expected to reach around 9% of total installed capacity by 2024—a jump from the current 2%. Bilateral PPAs, including corporate procurements and private auctions, are emerging as an important driver of renewables growth in the country, although regulated renewable power auctions will continue to play an important role in the near future.