March reports summarized key trends for global power and renewables and offered an in-depth look at the Russia-Ukraine crisis in Europe as well as supply security and grid reliability issues, in addition to clean energy investments.

According to the report, and continuing a trend that was observed last year, electricity demand growth is expected to continue in 2022 but at a more moderated level as countries get closer to pre-pandemic levels, although uncertainties abound depending on new COVID-19 waves or lockdown restrictions. At the same time, the ongoing global energy supply crunch—exacerbated by the recent events surrounding the Russia-Ukraine crisis—means that high and volatile power prices will continue. Supply chain bottlenecks and increases in raw material prices, amplified by recent events, are also putting pressure on renewable costs. Yet renewables are expected to continue to grow, driven by decarbonization targets and secondary routes to market such as corporate power purchase agreements. Meanwhile, infrastructure challenges and grid reliability will dominate policy discussions while tensions between decarbonization and supply security lead governments and companies to consider an expanding range of clean technologies.

On the back of already tight global fuel markets, recent events surrounding the Russia-Ukraine crisis have pushed spot coal and gas prices to record highs, making wholesale power prices skyrocket. The situation is especially pronounced in Europe given its dependence on Russian fuel imports.

According to the IHS Markit Insight "How strong is the storm? Assessing the impact of a severe, sustained Russia-Ukraine crisis on the European economy and energy", under a "severe" scenario, European wholesale energy bills could treble—reaching close to €1,500 billion in 2022, with windfall profits to non-gas generators. European governments have started intervening with measures to reduce the impact of high energy prices on consumers. 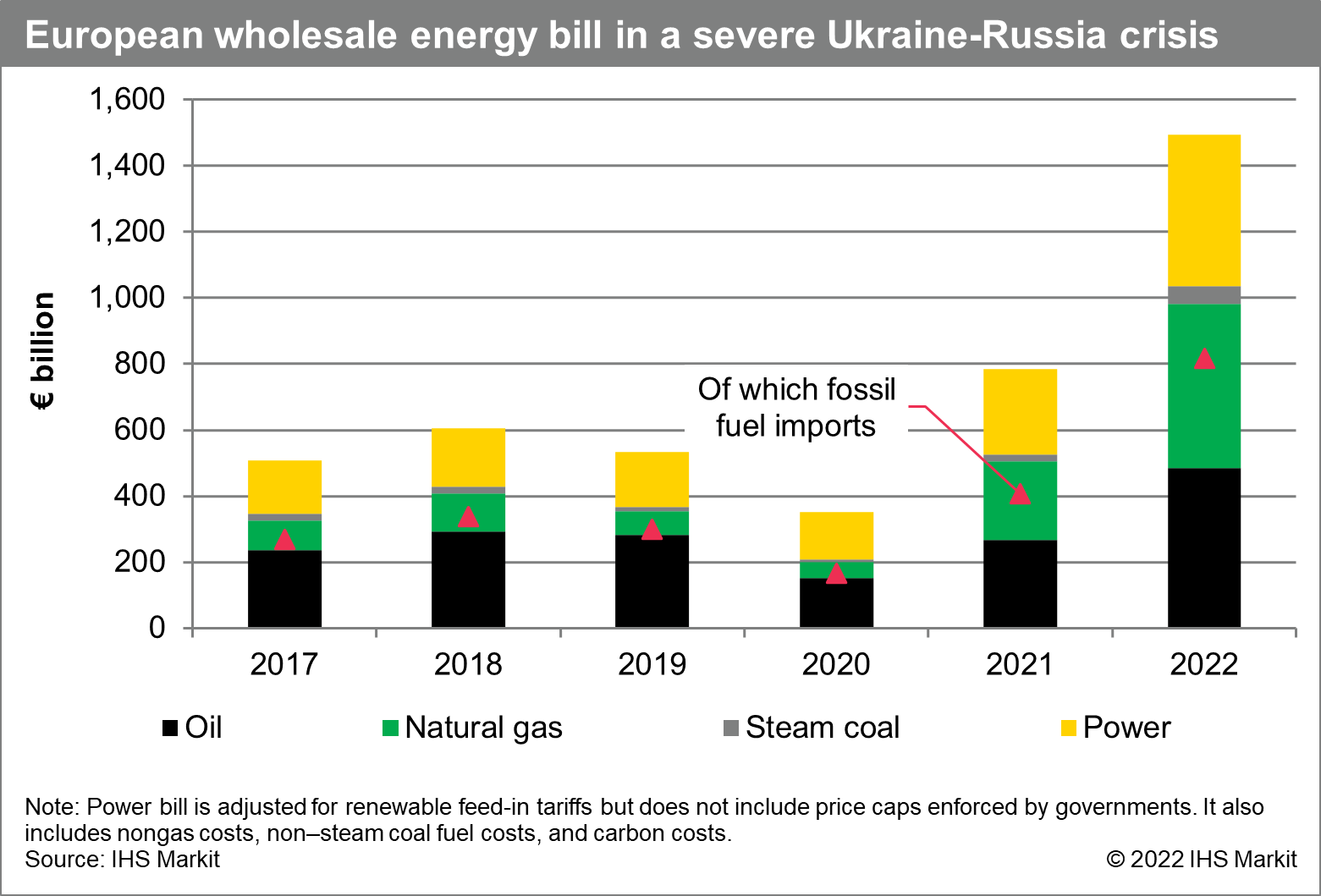 In early March, the European Commission released its REPowerEU proposal, an outline of a plan to make the European Union independent from Russian fossil fuels well before 2030. According to the IHS Markit Insight "What is needed for Europe to decrease gas demand by 40% by 2030?", reducing reliance on Russian natural gas will require extraordinary efforts across all sectors and a steep change in the pace of development of clean technologies. While all sectors would need to play their part in cutting gas demand more aggressively, certain measures—notably in the power sector—would allow for immediate and considerable gains.

Indeed, according to the IHS Markit Insight "Setting the vision: The impact of REPowerEU on the European power system", delaying half of the coal and/or nuclear retirements scheduled for 2022 and putting back in operation the coal capacity that is currently in reserve could displace 50 TWh of gas-fired generation and reduce gas consumption by 9 Bcm through the rest of 2022. REPowerEU also seeks to front-load renewable deployment by doubling capacity by 2025 and tripling it by 2030. While the target seems achievable for solar photovoltaics, it is much more challenging for wind—specfically onshore wind—and would require a total transformation of the permitting process and a huge acceleration of repowering. The IHS Markit Insight "Can Europe deliver the renewable ambition in REPowerEU?"considers an Accelerated Case, pushing all hurdles aside, in which European wind and solar capacity grows from 342 GW in 2021 to 1,007 GW in 2030—within reach of the REPowerEU target of 1,012 GW and equivalent to the renewable capacity in 2037 in the current Planning Case. According to the report, the overperformance of the solar sector partially compensates for the hurdles in onshore wind deployment and lead time for offshore wind to take off.

The global energy supply crunch, now exacerbated by the Russia-Ukraine crisis, and climate-related extreme weather-induced power supply disruptions of 2021 have pushed supply security and grid reliability to the forefront of policy discussions.

Mexico's government is also pushing regulatory changes that aim to increase the role of the state utility Comisión Federal de Electricidad (CFE), with reliability and security of supply as the main drivers. The proposed changes would ultimately lead to an increase of natural gas use over renewables. The IHS Markit Profile "Mexico Power Market Profile" provides a detailed update of key issues related to the country's power sector. Mexico currently imports by pipeline nearly 60% of its national gas needs from the United States and its exposure to natural gas price fluctuations is large as seen in 2021 during the Texas winter storm, which resulted in gas price spikes as well as gas import cuts.

In regions like Sub-Saharan Africa, there is an urgent need to improve power system reliability. According to the IHS Markit Insight "Beyond electricity generation: Examining Sub-Saharan Africa's grid reliability challenges", more than half of the region's population has no access to electricity. Higher levels of intermittent renewable generation are also expected to further strain the system. The region's long-term energy planning will have to take these challenges into account and embed energy transition objectives into a wider scope that aims to increase the reliability of the central network while allowing solutions in the distributed system to increase electrification across the population, as well as off-grid systems for isolated areas with low demand levels.

Meanwhile in Japan, a magnitude 7.4 earthquake hit Fukushima on 17 March 2022, causing 3.3 GW of thermal power plants in the eastern region to go offline and creating concerns over power supply amid the winter month. According to the IHS Markit Insight "Tokyo and Tohoku face blackout fears after Fukushima earthquake", a cold winter front also hit Japan on 22 March and, at one point, demand exceeded 100% of the supply volume, causing the Ministry of Economy, Trade, and Industry to issue a power supply crisis warning for the first time since 2011. The event was yet another warning after the winter 2020/21 supply crisis demonstrating the dangerously low reserve margin the country is balancing upon, and a need for further coordination across the nation to balance power amid its energy transition.

Against this backdrop of heightened supply security concerns, efforts to ramp up clean energy investments continued.

In Southeast Asia, the issuance of green debt as a new source of financing projects has taken off in recent years, driven by governments' push to increase renewable development, investors' net-zero commitments, and the improved credibility of green bonds. According to the IHS Markit Insight "Green bond rises as a new financing vehicle in Southeast Asia", the issuance of annual green bonds and loans for funding renewable projects in the region grew to US$4.4 billion in 2021—a five-fold increase over the past five years. Renewable energy was the largest sector, capturing 40% of total proceeds, and independent power producers were the most active, although institutional investors are also stepping up their efforts.

To achieve its new net-zero by the 2050s emission target, Singapore also recently increased its carbon tax from S$10-15/metric ton to S$50-80/metric ton by 2030 (the tax is currently at S$5/metric ton). According to the IHS Markit Insight "Singapore's carbon tax increase of up to 16-fold will make low-carbon technologies and power imports cost competitive", when the tax reaches S$55/metric ton, coupling a combined cycle gas turbine (CCGT) with carbon capture technology becomes cost competitive against a stand-alone CCGT in terms of its short-run marginal cost. Financial support from the carbon tax revenue has already been earmarked for decarbonization and can further help the deployment of low-carbon technologies. The carbon tax also makes low-carbon power imports a more viable option for all customers.

Yet despite these efforts, challenges persist in the region. According to the IHS Markit Insight "New climate actions demonstrate ASEAN's ongoing decarbonization efforts, but challenges remain", most Association of Southeast Asian Nations (ASEAN) countries' net-zero targets are more aggressive than the prevailing power development plans (PDPs) and it is yet to be seen how new PDPs would match up. Carbon pricing has also only been implemented in Singapore and Indonesia so far. At the same time, the region's power demand still maintains a robust growth and 28 GW of coal capacity is younger than five years, making them uneconomic to retire by 2040. In addition, gas as a bridge fuel has always been associated with issues such as insufficient supply and infrastructure investment, as well as high cost.

Meanwhile in China, according to the IHS Markit Insight "Installation rush in 2021 propels China to become the largest offshore wind market globally", a rush to meet subsidy deadlines resulted in 16.9 GW of offshore wind installations in 2021—accounting for over 80% of total global additions and quintupling the country's domestic additon levels from 2020. The number of offshore construction vessels also increased sharply in 2021, removing the key bottleneck in China's supply chain capabilities. While record-level offshore wind additions will not reoccur in 2022, the strong momentum is expected to continue during the 14th FYP period.

According to the IHS Markit Insight "Spending on low-carbon power will reach $530 billion in 2030, with a total of $4.4 trillion in cumulative spending between now and the end of the decade", low-carbon power accounted for 30% of the $1.5 trillion capex in the energy sector supply side in 2021—up from 22% in 2015. Looking ahead, the overall capital investment efficiency for low-carbon power technologies is expected to improve by 30% by 2030, which means that while renewables are projected to grow rapidly, spending grows more slowly. To meet more ambitious climate objectives in line with net zero, however, annual low-carbon spending levels would need to double compared with current projections and reach about $1 trillion in 2030. 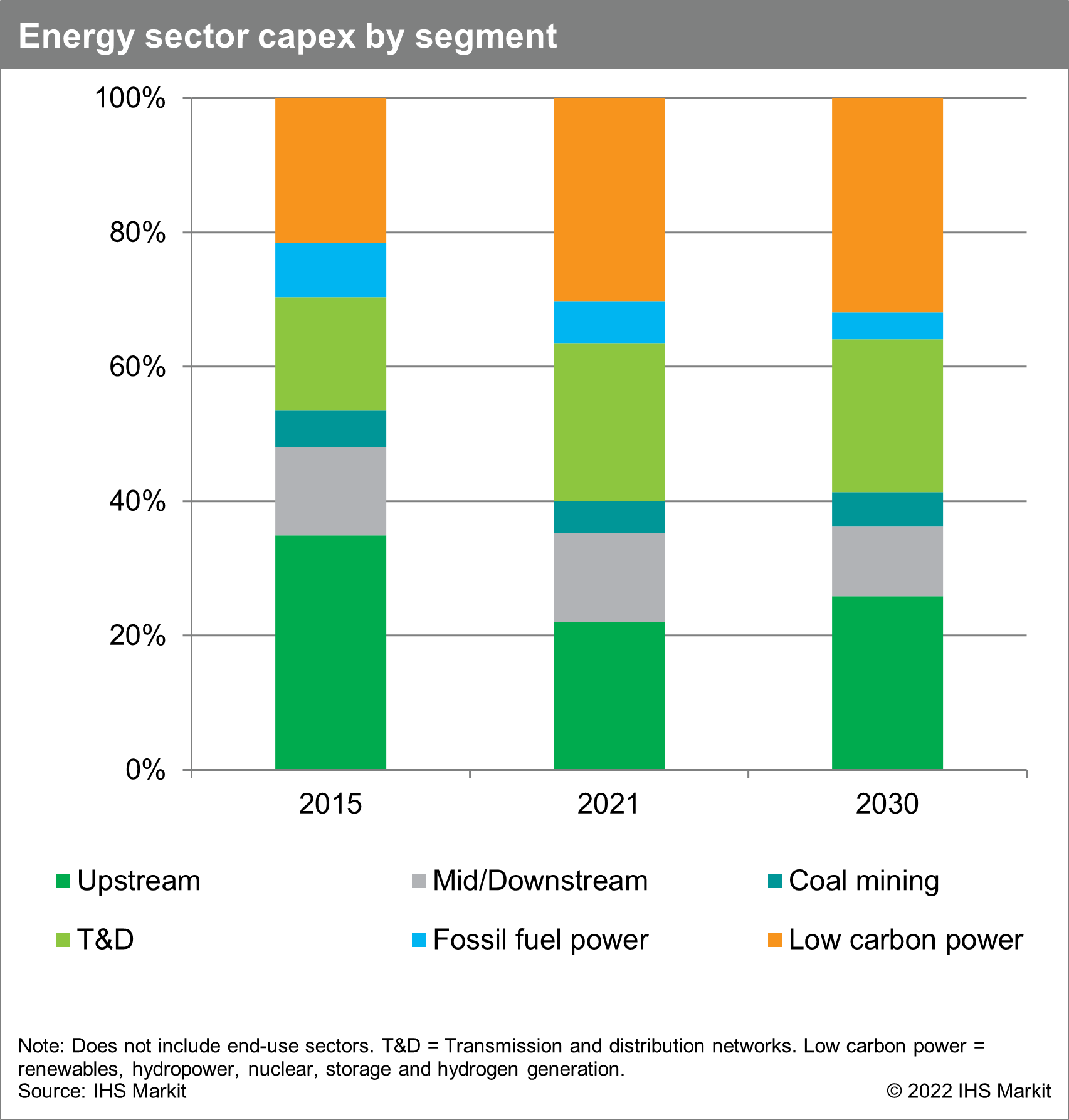