The global economic recovery hit a speed bump in November, as rising COVID-19 infections led to a renewed slowing of business activity. But the slowdown looks to be temporary, with business sentiment about the year ahead jumping to its highest for over six years, fuelled primarily by expectations of life starting to return to normal in the coming year amid encouraging vaccine news.

The upturn was led by the US and China, where growth reached the highest for over five and over ten years respectively, and which also saw strong job gains. In contrast, the eurozone and UK slipped back into contraction as tighter COVID-19 restrictions hit service sector businesses and led to further job losses.

The headline JPMorgan Global PMI™ (compiled by IHS Markit) edged down from 53.3 in October, its highest since August 2018, to 53.1 in November. 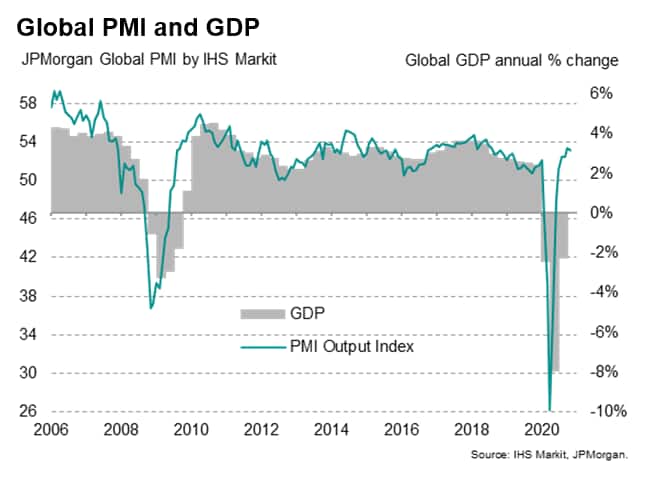 While the PMI has now indicated expanding business activity levels for five successive months, reflecting a rebound in business after the COVID-19 pandemic caused an unprecedented collapse in the second quarter, the November data reveal a slight waning of the pace of recovery.

Consumers act as drag on recovery

Although manufacturing output growth continued to accelerate during the month, reaching the highest recorded since January 2018, global service sector growth cooled from September's 18-month peak, thereby falling further behind the pace of expansion seen in the goods-producing sector. With the exception of the three months at the height of the initial worldwide COVID-19 lockdowns between March and May, the underperformance of services relative to manufacturing was the largest recorded since early-2010. 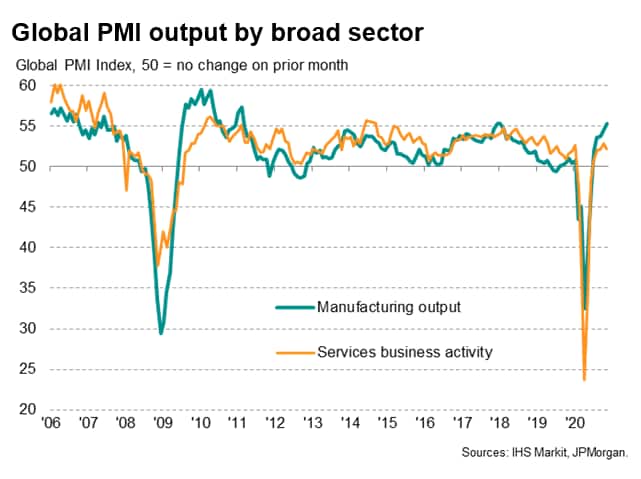 Within the service sector, consumer-facing businesses once again reported the worst performance as output fell for a tenth successive month, with the rate of decline even picking up slightly. In contrast, business and financial services companies continued to report growth, with the latter again leading the upturn despite seeing some cooling in the rate of increase.

Consumers also acted as the major drag on output growth in the manufacturing sector. Although some improvement in the rate of expansion of consumer goods production was reported, the sector was the worst performing of the three main market groups. Producers of investment goods such as plant and machinery reported the strongest gains during the month, providing a welcome signal of reviving capital spending on goods such as machinery and equipment.

The overall global rise in output of investment goods was the strongest recorded since February2011, matched by a similarly robust rise in new orders for such goods.

Producers of intermediate goods, which generally supply inputs to other producers, also fared well, in part due to restocking. 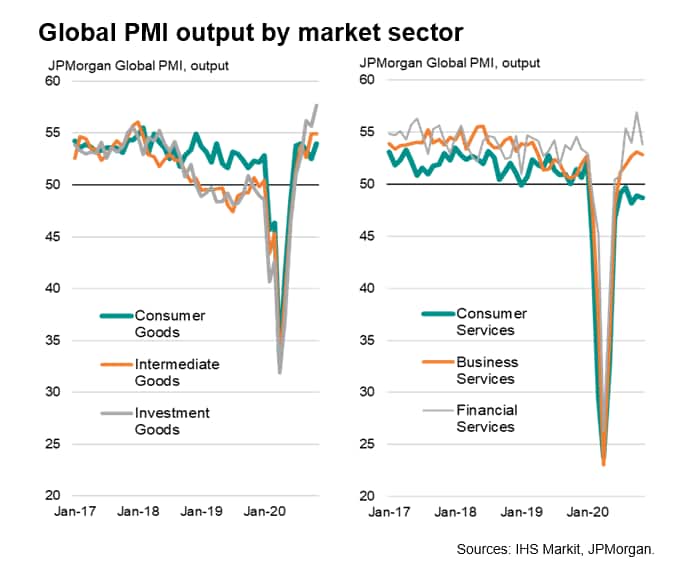 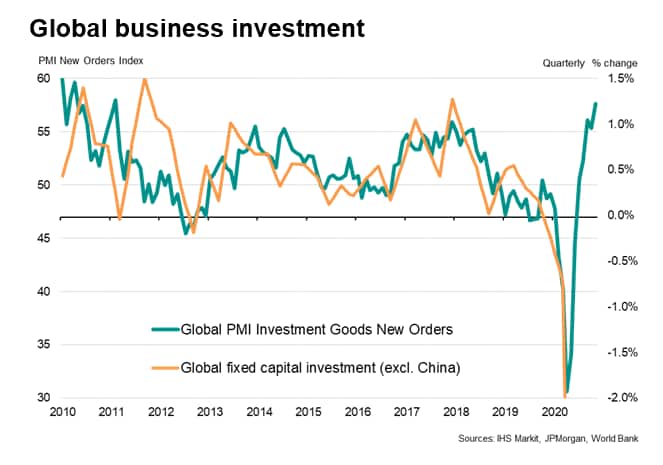 Exports of services lead the downturn

The divergence between manufacturing and services widened further when exports are considered. New export orders for manufactured goods rose globally for a third successive month in November, the rate of increase picking up slightly to return to September's two-and-a-half-year high. In contrast, global exports of services fell sharply again in November, reflecting falling demand for travel and tourism services in particular. 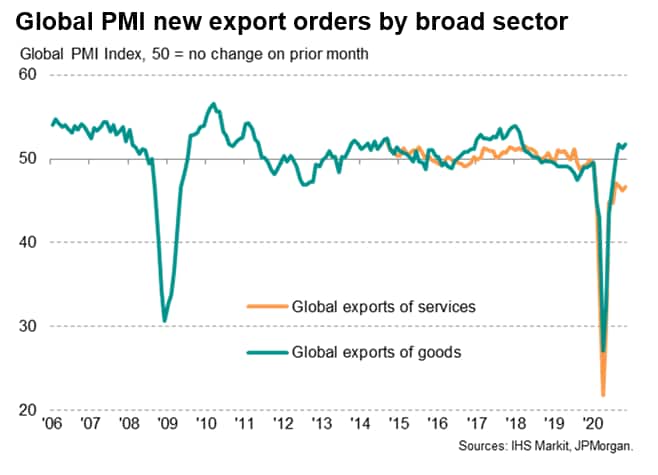 The slowing in the rate of global economic expansion came at a time of renewed waves of virus infections in many countries, which have in turn led to increased lockdowns and other precautions in most cases, which have hit consumer-facing businesses the hardest. 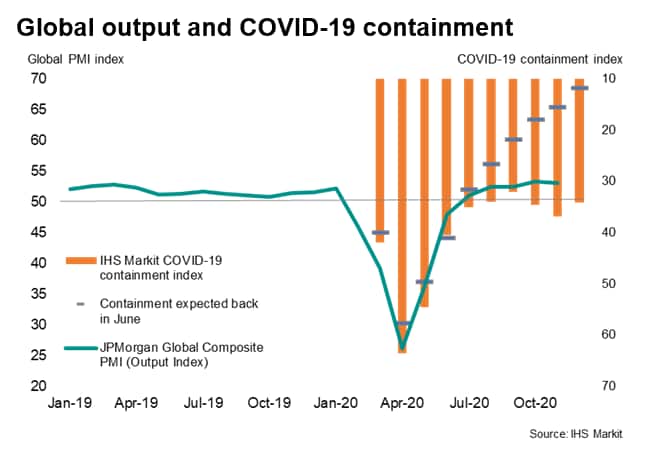 The global average COVID-19 Containment Index had eased from a peak of 64 in April to 32 in September, but has since risen to 37 in November, indicating a renewed tightening of restrictions. Note also that this represents a much harder degree of containment than had been previously expected, reflecting the unanticipated strength of second virus waves: back in June, governments' plans to open up their economies had pointed to the containment index falling to just 16 by November. 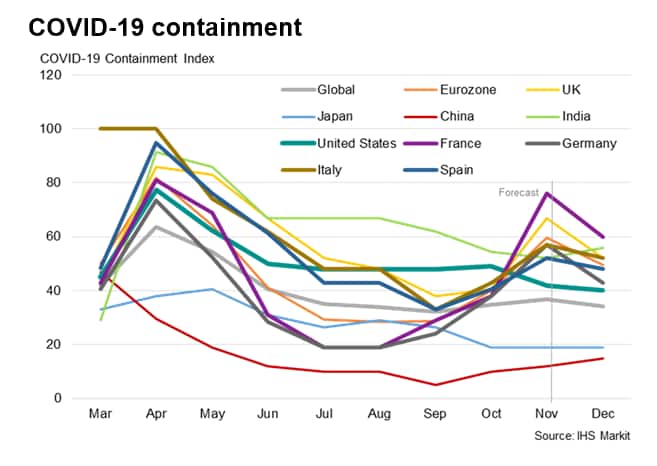 US and China lead the global expansion

Changes in degrees of COVID-19 containment varied by country, which appears to have had a bearing on the PMI data.

Two economies with the lowest degrees of virus containment - China and the US - reported the strongest rates of economic expansion in November. The US saw an especially marked acceleration in growth, with the composite PMI hitting a five-and-a-half year high, coinciding with the COVID-19 containment index dropping 7-points to the lowest since the pandemic began. At just 12, China's containment index is the lowest of all major economies, with relatively loose restrictions helping push the rate of expansion signalled by the Caixin PMI to the highest for ten and a half years.

While both the US and China saw accelerating factory output growth, they both also saw notable accelerations in service sector growth rates, with China's service sector notching up the second-strongest gain in over ten years and the US seeing the best performance in over five years. The latter was achieved despite US consumer service providers remaining in a downturn due to rising infection rates.

While Japan also has a low degree of mandatory virus restrictions, it's au Jibun Bank PMI remained subdued, likely reflecting the relatively large role that travel and tourism plays in the Japanese economy, its older demographic and the underperformance of the Japanese economy seen prior to the pandemic. 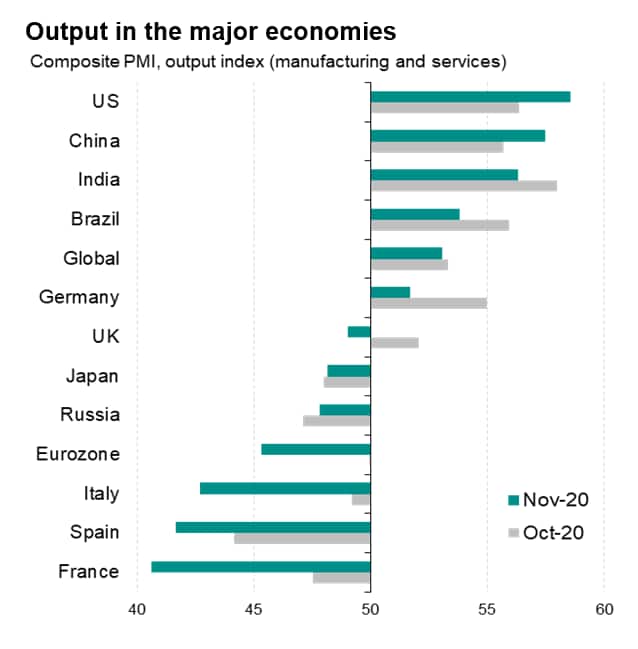 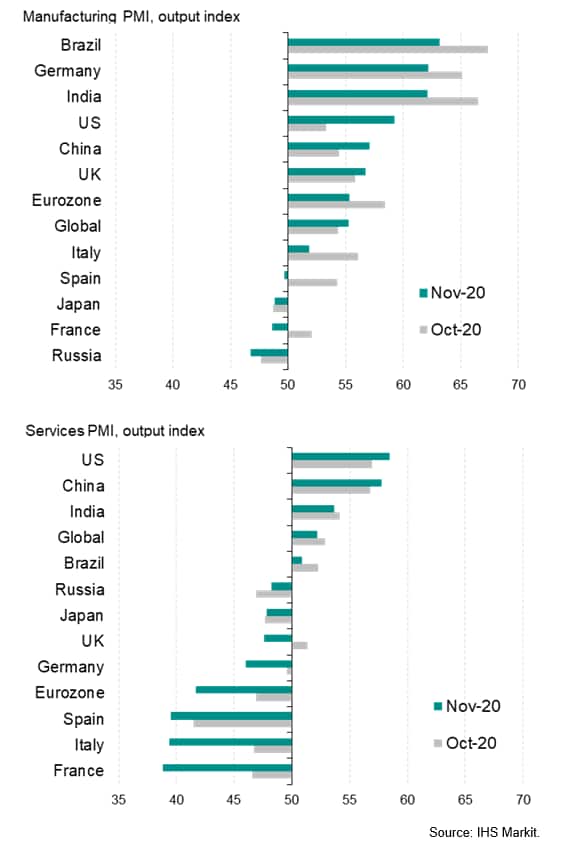 Eurozone and UK slide back into contraction

While the US and China saw strong and accelerating growth, the eurozone slipped back into a substantial contraction, led by sharply falling business activity in France, Spain and Italy. All three countries saw tighter COVID-19 restrictions in November as their governments sought to control second waves of infections.

Germany bucked the eurozone downturn, thanks to strong manufacturing output growth offsetting a drop in service sector activity, though even in Germany the overall rate of expansion slowed markedly.

The UK also joined the eurozone in reporting a renewed fall in business activity during November, likewise attributable to more aggressive lockdown measures. 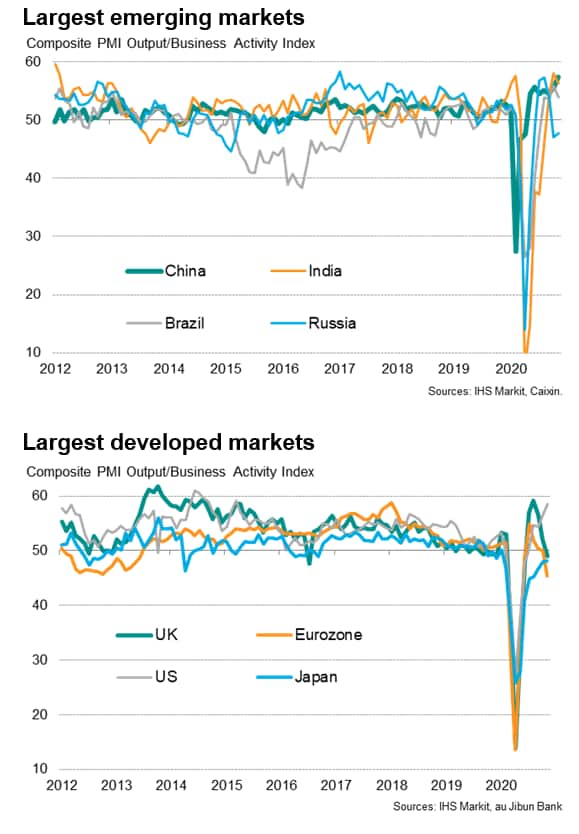 Optimism surges, especially in the US

Encouragingly, the COVID-19 Containment Index is expected to show an easing of global restrictions in December, based on previously announced government intentions for lockdown measures, as virus numbers are again brought under control. This should help reverse some of the negative pressures on business seen in November. Furthermore, news of successful vaccine trials has painted a brighter picture for the coming months and contributed to a lifting of worldwide business expectations for the year ahead to the highest since May 2014.

The greatest improvement in sentiment was seen in the US, where business optimism was also buoyed by reduced uncertainty following the presidential elections and hopes of further state support in the form of fiscal stimulus. The boost to confidence contributed to an increase in hiring. Global employment rose in November to the greatest extent since April 2019. November saw factory jobs stabilise for the first time in a year, but it was the service sector where the job creation was most widely reported. Service sector employment rose to the greatest extent since February 2019.

The UK reported the steepest drop in employment of the major economies surveyed in November. Like Spain and Italy, the UK saw job losses accelerate compared to October. 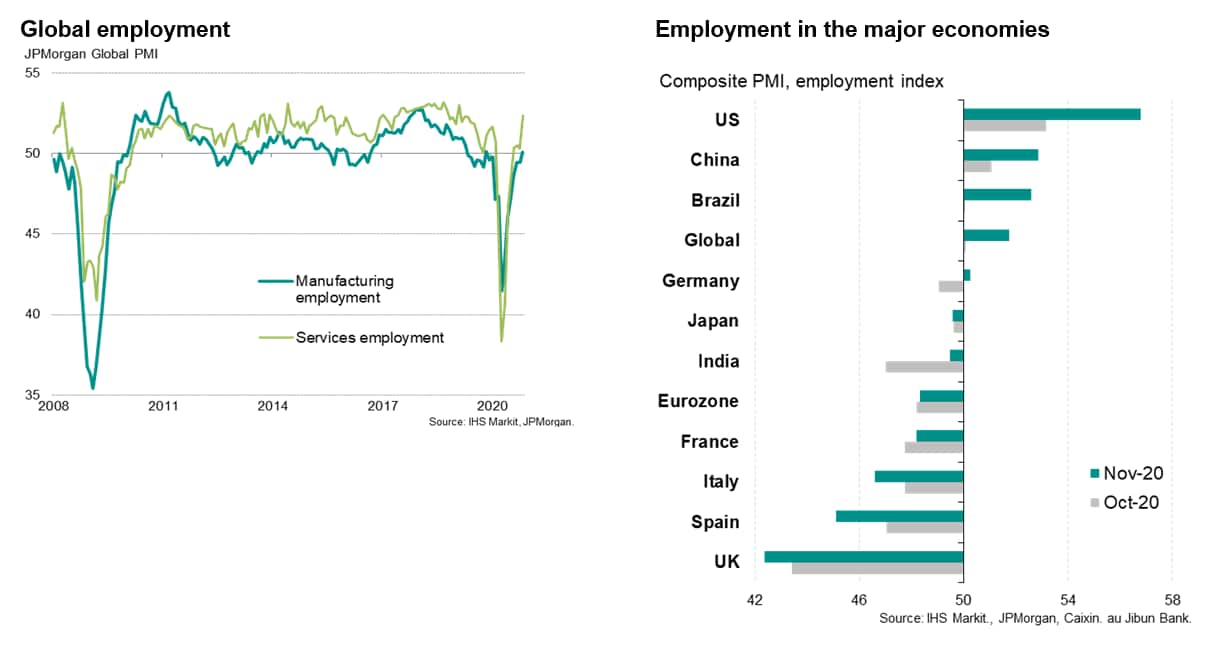