The worldwide PMI surveys indicated a solid start to the fourth quarter for the global economy, with business activity rising at the fastest rate for 26 months. Business confidence also improved markedly as companies grew more optimistic about the year ahead. However, firms remained cautious with regard to hiring, keeping payroll numbers steady on average amid worries about the impact of second COVID-19 waves, which cast a shadow over recovery prospects in the coming months.

The headline JPMorgan Global PMI™ (compiled by IHS Markit) rose from 52.5 in September to 53.3 in October, its highest since August 2018. The PMI has now indicated expanding business activity for four successive months, reflecting a rebound in economic activity in the third quarter and at the start of the fourth quarter after the COVID-19 pandemic caused an unprecedented collapse in the second quarter. 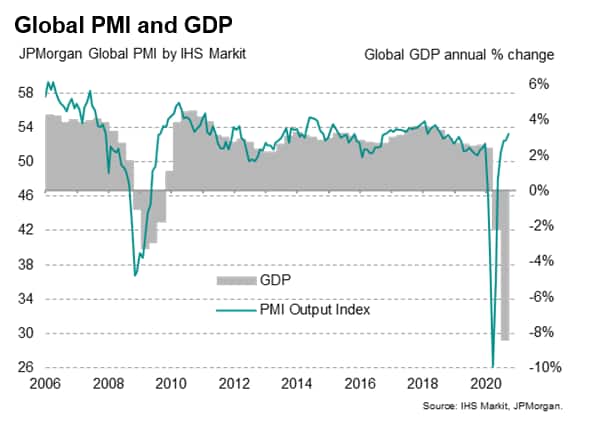 However, the recovery signalled by the global PMI remains only modest both in terms of GDP growth and relative to the amount of output lost during the height of the pandemic.

In terms of GDP growth, the PMI is running at a level broadly consistent with annualised GDP growth of just over 3%. That compares with a peak rate of decline of around 12% signalled at the height of the global pandemic back in April [*].

Moreover, between February and June, the PMI recorded a cumulative 54.3 points of sub-50 (contraction) readings, but since July, the PMI has only exceeded 50 by a mere cumulative 9.3 index points. The comparatively modest expansion seen in the past four months therefore hints at only part of the output lost to the pandemic having been recovered so far.

Consumers act as drag on recovery

The recovery also remained uneven, with consumers acting as a drag on the overall pace of expansion in October.

Although growth accelerated in both manufacturing and services to 32- and 19-month highs respectively in October, the latter continued to lag the factory sector thanks primarily to an ongoing downturn of activity within consumer-facing service sector businesses, the output of which was fallen continually over the past nine months.

Some weakening of consumer-facing markets was also evident in manufacturing, however, with output of consumer goods growing at a weakened rate for a second successive month, markedly underperforming growth rates seen for investment goods (such as plant and machinery) and intermediate goods (comprising inputs bought by other manufacturers).

Encouragingly, financial services activity growth accelerated markedly in October to the highest since February 2012, and business-to-business services growth hit a 19-month high, driving the re-acceleration of overall service sector growth after a steadying of the rate of expansion seen in September. 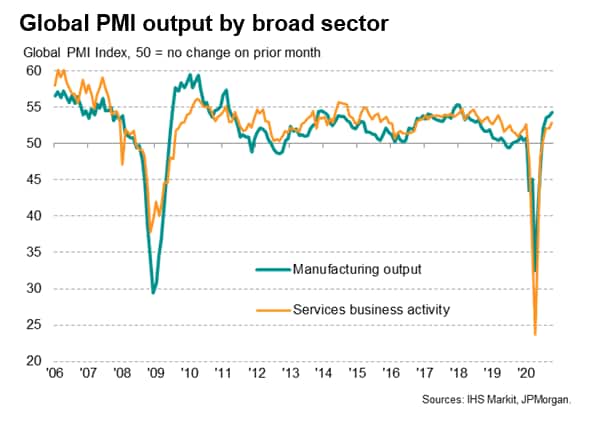 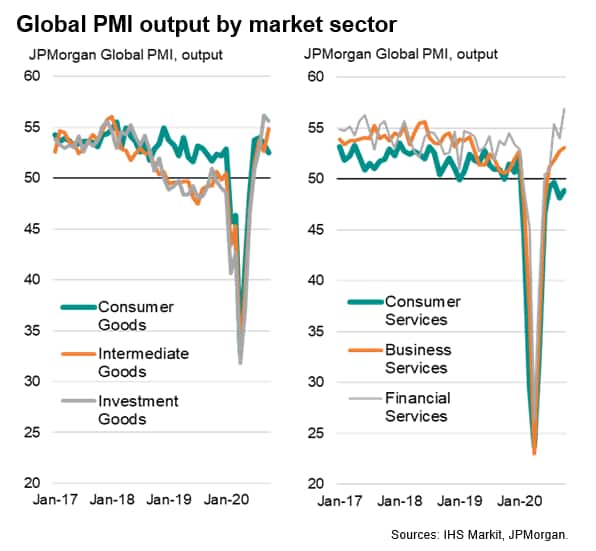 While a key development driving growth in the factory sector has been a revival of global goods trade, the opposite applies to services. Manufactured exports rose globally for a second month running in October, albeit with the rate of expansion slowing marginally, but service sector exports continued to fall sharply, with the rate of decline in fact gathering pace for a second consecutive month. A significant portion of service sector exports are accounted for by travel and tourism, which continued to be hit especially hard by COVID-19 travel restrictions and renewed lockdown measures. 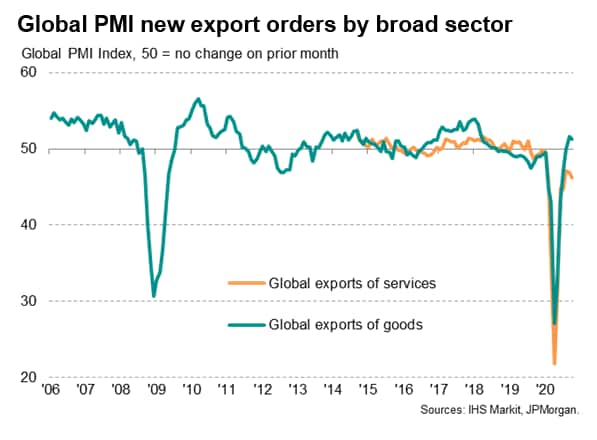 Can strong growth be sustained?

Looking ahead, the survey's gauge of firms' expectations for their own output in 12 months' time rose sharply in October, reaching the highest since June 2018. Sentiment improved markedly in both manufacturing and services, linked to hopes of a vaccine or treatment bringing an end to the economic disruption caused by COVID-19 in the course of the coming year, as well as expectations of further stimulus from governments to support economies in the meantime. 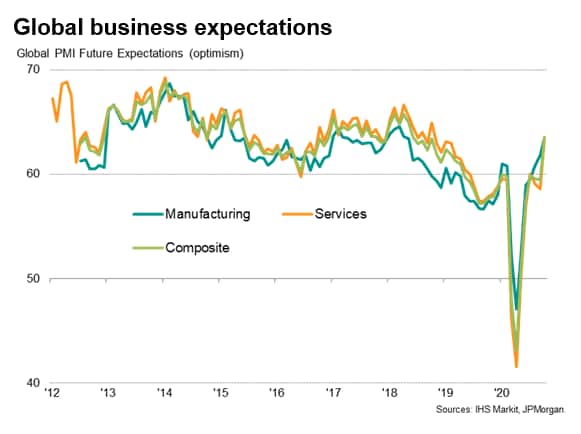 However, while the upturn in confidence about the year ahead is encouraging, it tells us very little about the next three-to-six months, where the picture is more concerning. Given that there is a broad-based expectation that a COVID-19 vaccine will be widely available by the second half of 2021, it is perhaps no surprise that companies have become more upbeat about their output in a year's time. More worrying is the fact that, despite output (and new orders) growth accelerating in October, companies globally held their staffing levels unchanged on average. A marginal rise in service sector headcounts was negated by a further cut in factory jobs.

The reluctance to boost headcounts is unusual given the increase in firms' backlogs of uncompleted work in recent months, and hints strongly at a reluctance to add to staff costs in the face of such an uncertain near-term outlook for demand, given the resurgence of COVID-19 in many countries. 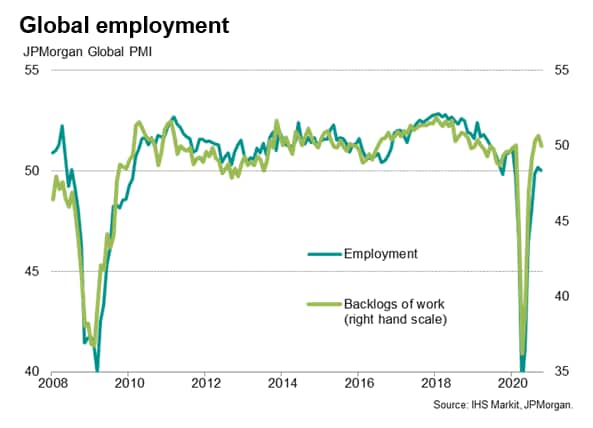 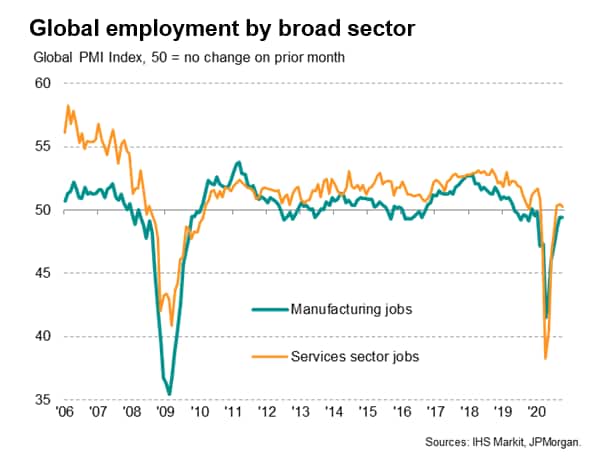 Companies reticence to take on extra staff fires a warning shot over recovery hopes, often reflecting concerns that second waves of virus infections will curb demand in the near term, hitting order books and revenues.

Further waves of virus infections have already led to increased lockdowns and other precautions in recent weeks, which have affected business activity in growing numbers of companies.

The global average COVID-19 Containment Index had eased from a peak of 64 in April to 32 in September, but has risen again to 35 in October, representing a significant and tightening degree of containment.

The degree of containment has also remained far higher than had been expected just a few months ago, reflecting the scale of resurgent infection numbers in many countries. For example, back in June, governments' plans to open up their economies had pointed to the global containment index falling to just 18 by October instead of the current reading of 35. 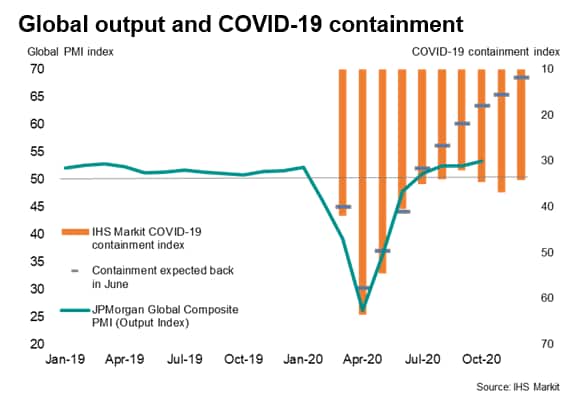 What's more, the path to further opening up economies is now gloomier than had been expected back in the summer. Given governments' notified plans for future virus containment measures, the Global COVID-19 Containment Index is now expected to rise further to 37 in November and still be stuck at 34 by the end of the year, whereas back in June it was projected to have fallen to just 12 by year-end.

Projections out to June 2021 indicate that the global containment is on course to remain at 17, reflecting the ongoing need for many social distancing and other virus protection measures to remain in place for longer than previously thought necessary by governments worldwide, meaning economic growth rates will inevitably be weaker than previously anticipated over this period.

[*] We use OLS regression to estimate the annual growth rate of GDP implied by the PMI. This model indicates that the annual rate of decline likely peaked at approximately -11.7% back in April at the height of worldwide COVID-19 related lockdowns, but that the relaxation of virus restrictions has since helped drive an improvement to an approximate 3.3% rate of growth in August and September. Note that this does not indicate that the economy is now larger than a year ago, merely that the rate of growth on an annual basis has improved to around 2.5%, which still represents a very modest rate of expansion relative to the collapse seen at the height of the pandemic.