Global business activity grew at a marginally improved rate in October, suggesting the pace of economic growth accelerated for the first time in four months. However, the improvement in part reflected weather-related rebounds in the US and Japan. Even with these rebounds, the rate of increase was the second-weakest seen over the past two years. 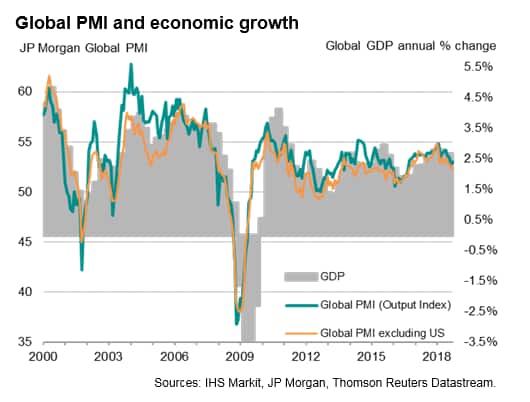 The headline JPMorgan Global Composite PMI, compiled by IHS Markit, edged higher from 52.8 in September to 53.0 in October. While the latest reading is indicative of annual global GDP growth of just below 2.5% (at market exchange rates), the past two months have seen the weakest expansions for two years.

Manufacturing output increased at the slowest pace since June 2016, but services activity growth picked up from September's two-year low, albeit remaining below the highs seen earlier in the year. 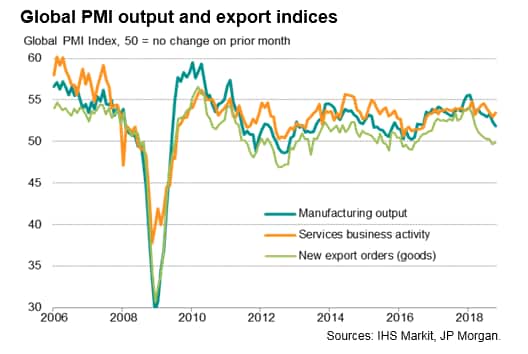 While the manufacturing slowdown could be largely attributed to a second successive month of marginal declines in worldwide export orders, the improved service sector performance in October was predominantly driven by faster growth in the US and Japan, which had both seen adverse weather subdue business in September. As such, the data suggest the upturn in the global PMI should be treated with caution as an indication of a possible turning point, as the rebounds in these economies may fade in November.

Emerging market output grew especially slowly once again, registering the joint-weakest expansion for 25 months. Rates of increase slowed in both sectors, though manufacturing recorded an especially modest upturn. Developed world growth improved but was still the second-weakest in two years, impeded by the slowest manufacturing growth since September 2016. 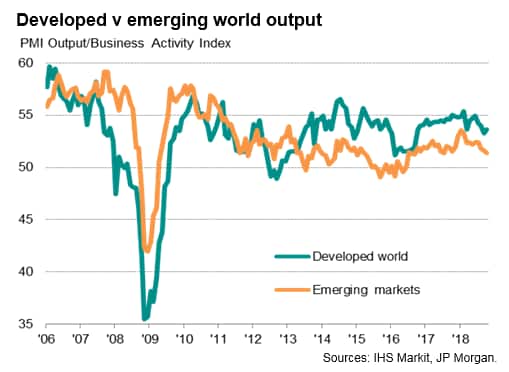 Europe slows as US and Japan rebound

Among the major developed markets, Europe saw a marked slowdown in growth. The eurozone and UK composite PMI figures registered the weakest upturns for 25 and 27 months respectively. Notably, within the euro area, growth hit its joint-lowest for 25 months in Germany and Italy contracted for the first time since December 2014.

Composite PMI readings rose to three- and six-month highs respectively in the US and Japan, but both were buoyed in part by improved weather compared to the hurricanes and typhoons seen in September. The upturn meant the US was the best performer of the four largest developed economies. Excluding the US, global growth was its weakest since September 2016. 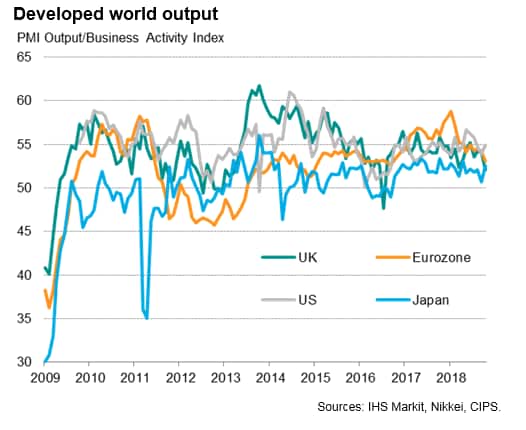 China slowdown contrasts with upturn in other key emerging markets

In the major emerging markets, a key development was the weakening of growth in China to the slowest since June 2016, with only marginal gains seen in both manufacturing and services. In contrast, improved performances were seen in India, Russia and Brazil after disappointing data in prior months. 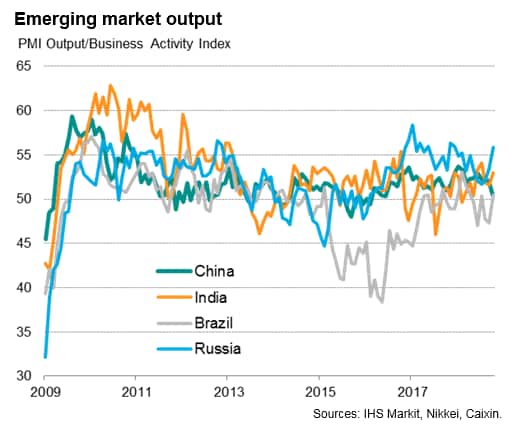 Forward-looking indicators brought mixed news on the outlook. Inflows of new business continued to rise, but at a rate unchanged on September's 22-month low. More encouragingly, future expectations revived from September's two-year low to the highest since June. However, a five-month high in the service sector, driven mainly by improved sentiment in the US, was in part offset by manufacturing optimism sliding to its lowest since comparable data were first available in mid-2012 amid trade protectionism worries.

Tariffs were a key factor behind a jump in firms' costs, alongside higher energy prices and rising wages in some countries. Measured across both sectors, input costs showed the second-largest monthly increase since June 2011.

Average selling prices for goods and services also rose sharply again as firms passed higher costs on to customers. The monthly rise in prices charged was just below the survey record high seen in September, moderating slightly in both manufacturing and services.

Among the major economies for which comparable data are available, the steepest rise in selling prices was seen in Germany, followed by the US. 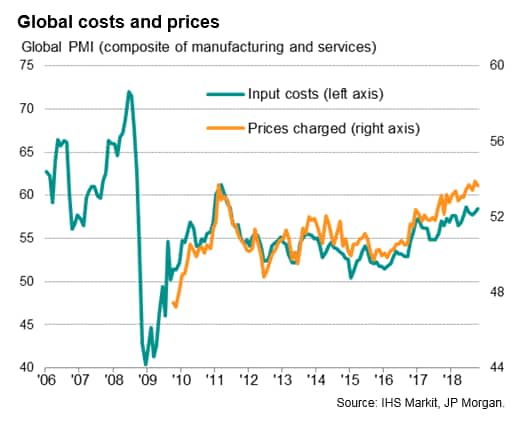