We have investigated network functions virtualization (NFV) and its software-defined networking (SDN) companion for the past five years as they have become the hottest topics in telecom. Service provider networks are complex: they have seven layers, feature multiple network domain types including consumer broadband, business VPNs, mobile and mobile backhaul-to name a few, and carry multiple services such as broadband, layer 2 VPNs, layer 3 VPNs, and optical transport. Providers believe that NFV and SDN are a fundamental change in telecom network architecture that will deliver benefits in new service agility and revenue, operational efficiencies, and capex savings.

From its academic beginnings at Stanford University in 2005 to practical applications in data centers and telecommunications carrier networks during the past four years, SDN has shown the potential to solve significant operational problems. The early successes by Google in data centers and by NTT in the carrier environment have inspired service providers around the world to invest time and effort into laboratory proof of concept (PoC) projects for specific SDN target network domains and use cases using the inter-related "partner" NFV.

And carriers everywhere are moving toward NFV, as illustrated by our 2015 survey of worldwide service providers that control over 43% of global telecom capex and 39% of revenue. One of our key findings was that all major operators are either now deploying NFV or plan to within the next few years. Our research in this and other studies indicates that two primary factors are driving service providers to SDN and NFV: service agility that results in quicker time to revenue and operational efficiency.

For the most part, carriers are starting small with their NFV and SDN deployments and focusing on only parts of their network, on limited services, or with a limited number customers, which we call "contained domains," to ensure they can get the technology to work as intended. And though momentum is strong, it will still be many years before bigger parts or a whole network is controlled by SDNs.

The network industry is very interested in how NFV will be deployed, the use cases, and where in the network operators will make their initial investments. A majority of operators are clear about where they intend to deploy NFV and how these solutions will be used.

Some of the earliest NFV deployments in the 2015-2016 timeframe are for business virtual enterprise customer premises equipment (vE-CPE), also known as "vBranch." The business vE-CPE use case stood out as the strongest among all others in the survey, with 64% of our carriers planning to deploy in this immediate timeframe. Carriers view vE-CPE as the top use case for revenue generation, gaining operational efficiency, and reducing capex.

Service chaining is a horizontal use case where virtual network functions (VNFs) are combined in different sequences to deliver customer-specific services. We expect that eventually nearly every NFV deployment will involve service chaining.

The European Telecommunications Standards Institute (ETSI) defined nine use cases for NFV, including several that are used to offer services to enterprises. The chart below, which is sorted by popularity and time, shows the top four use cases for early deployment in 2015-2016 as identified by carriers participating in our study. These remain the top use cases for 2017 and later. 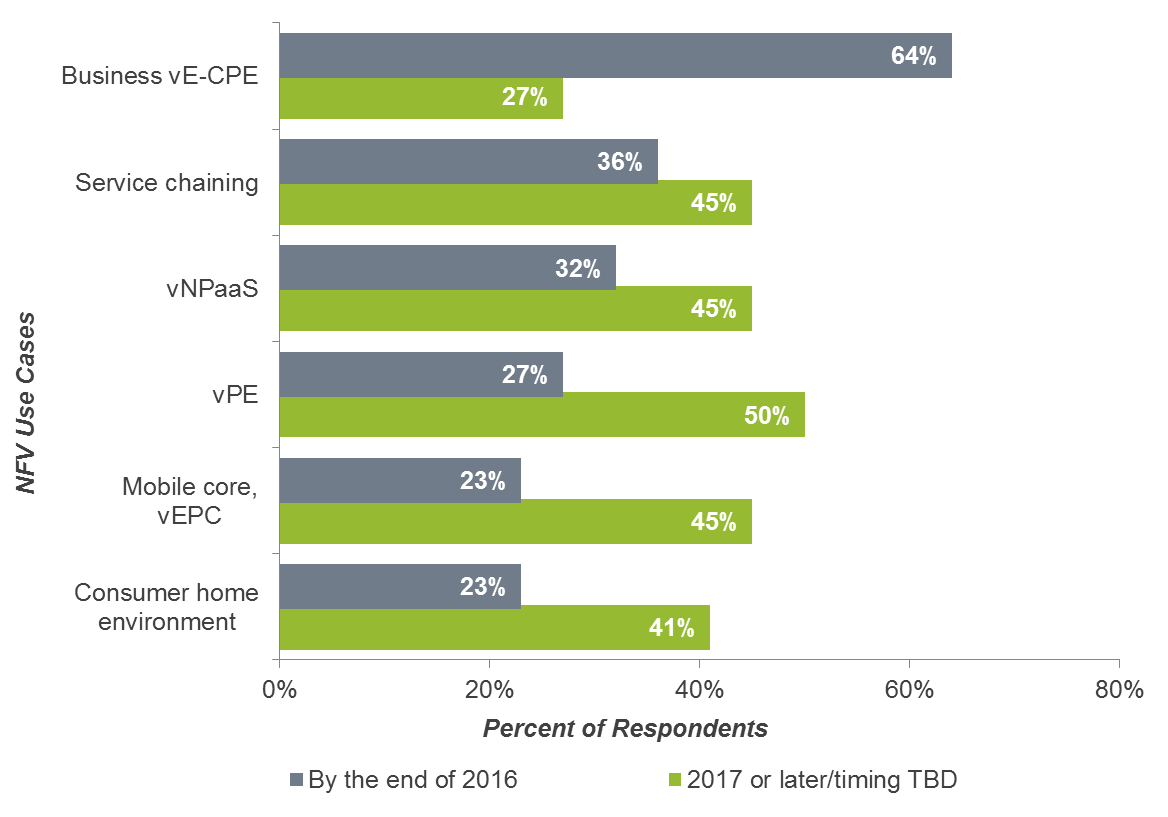 Virtual enterprise CPE (vE-CPE) is where network functions such as firewalls, wide area network (WAN) optimization control, and intrusion detection systems that are today typically deployed in boxes at each customer premises are offered as VNFs executing on commercial servers. Service chaining can optionally be used, and virtual provider edge (vPE) router software could be used.

Service chaining is a technique to execute a selected set of services that a customer has signed up for. For example, a customer may choose among a set of virtual firewall (vFW), virtual intrusion prevention system (vIPS), and virtual WAN optimization controller (vWOC) options for say, vFW2, vIPS3, vWOC1. These services can be executed on the customer's traffic via service chaining. Some vendors use vPE software in their service chaining products.

Virtual network platform as a service (vNPaaS) is in essence a logical slice of a physical and virtual network that looks and acts like a private physical network to the application (for example, Internet of Things) or customer. Specifically, it provides a toolkit for conveniently developing, deploying, and administering application software that is structured to support large numbers of subscribers, process large quantities of data, and potentially be accessed via the internet. In this case, the service provider provides a toolkit of networking and computing infrastructure as well as potentially some VNFs as a platform for the creation of a virtual network-that is, a vNPaaS. Enterprise consumers of this service use that toolkit to develop their own virtual networks.

The virtual provider edge router (vPE) sits at the point of the "IP edge," which is the point in an operator network where IP VPNs, content delivery networks (CDNs), and other IP services are delivered via the access network to customers.

We are in the early stages of a long-term transition to SDN-NFV architected networks. A lot continues to be learned as each year passes, and various barriers and drivers have become more prominent as operators get closer to commercial deployment.

Market research is very useful to determine current buyer thinking, and some of the top NFV use cases have changed positions in the last couple of years and may settle in for fewer changes in positions by 2016.

Carriers will learn that some avenues are not as fruitful as expected, and telecom equipment manufacturers and software suppliers may well invent new approaches that open up new applications. We are, of course, conducting an NFV survey again this year, and it will be interesting to see what new issues emerge and which problems get resolved in the additional commercial deployments planned for 2016.

If you're interested in hearing more about the experiences, lessons, and discoveries from service provider deployments of vE-CPE and vCPE, be sure to watch the replay of our recent webinar on Carrier NFV and SDN Lessons from Virtual CPE Deployments.