“While the 2017 attack figure decreased only slightly compared to 2016, the resultant 18,475 non-militant fatalities represented a much more significant 33 percent decrease year on year, and an even larger 45 percent decrease from the average fatality total over the preceding five years,” said Matthew Henman, head of Jane’s Terrorism and Insurgency Centre (JTIC) at IHS Markit.

These figures are from the annual Global Attack Index produced by JTIC. JTIC uses open source data to build a global database of politically- and ideologically-motivated violence by non-state armed groups and individuals, archived to 1997. The annual report highlights key data and global trends from the database. Download infographic. 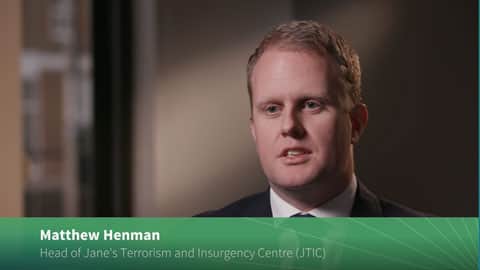 Key findings from the 2017 report

For the fourth consecutive year, the Islamic State was the most operationally active militant group in terms of attacks, with a total of at least 4,612 attacks in 2017 resulting in 6,499 non-militant fatalities. These figures represented a slight 9 percent increase in attacks – but a more substantial 40 percent decrease in resultant fatalities. In proportional terms, Islamic State attacks in 2017 accounted for 21 percent of all attacks worldwide, an increase from 18 percent in 2016.

“The overall trend of Islamic State attacks slightly increasing and fatalities decreasing substantially was representative of the operational shift undertaken by the group across the year as a consequence of steady territorial losses - most notably the cities of Mosul and Raqqa - which continued until the final capture of all territory controlled in Iraq and Syria in early November,” Henman said. “As it came under growing territorial pressure, the Islamic State transitioned back to insurgent operations, conducting a higher tempo of low intensity violence against security forces and non-state adversaries in areas newly recaptured from the group.”

There also was a reduction in external operations by the Islamic State targeting Western nations, with no evidently centrally-directed and executed attack in 2017, such as Paris in November 2015 and Brussels in March 2016. However, there were multiple attacks for which the group claimed responsibility that were conducted by suspected supporters of the group. These included the 22 May suicide attack in the UK city of Manchester, killing 22; the 17 August vehicle-impact attack in Barcelona, Spain, killing 14; and two combined vehicle-impact and knife attacks in the UK capital London on 22 March and 3 June, killing a total of 13.

As the Islamic State looks to regroup in Syria and Iraq and maintain its operational threat through a combination of low-level insurgent operations and periodic asymmetric mass-casualty attacks, the group will continue to exhort its supporters worldwide to continue to launch attacks in their home countries.

“This will particularly be the case in those states that participated in the US-led coalition against the group in Iraq and Syria, with the group utilizing a potent narrative of revenge for the territorial destruction of the group’s self-declared caliphate and for the civilians and fighters killed in its defense,” Henman said. “Operationally, it is likely that these attacks will continue to follow the same patterns as in 2016 and 2017, such as vehicle-impact and edged weapon attacks, although the use of homemade improvised explosive devices (IEDs) remains a strong if less likely possibility.”

The upcoming World Cup in Russia in June likely presents a particularly attractive target for the Islamic State, given Russia’s role in the group’s territorial defeat in addition to the participation of the Saudi and Iranian national teams.

“A successful attack would provide a tremendous propaganda boost for the Islamic State and its fighters and supporters, underlining the ongoing international threat posed by the group despite its territorial defeat,” Henman said. “While security will be extremely high across the course of the tournament, low-capability attacks by lone actors with no evident markers of radicalization remain extremely difficult to identify preemptively and there remains a substantial risk of an attack successfully being conducted.”

The JTIC dataset, used to generate the incident and trend analysis in this report, is compiled using reliable open-source intelligence (OSINT) collated from a comprehensive range of local, national, and international sources; government and inter-governmental reports; and analytical articles. Every effort is made by JTIC analysts to verify the accuracy of reported events through detailed examining and cross-referencing of all available sources. JTIC analysts consistently review event records entered into the database, and records are amended and updated as additional information becomes available.

The data used in this report was last updated on 9 January 2018.

Get in touch here to learn more about JTIC and other solutions from Jane’s.

No hand at the helm: US Navy pushes ahead with unmanned surface vessel development https://t.co/7Sch4AdmRP #USNavy https://t.co/wgqNYkJzbT