July saw another unprecedented lengthening of manufacturers' supply chains, linked in many cases to production of key components being hit by rising COVID-19 waves in many APAC economies. Prices continued to rise at one of the fastest rates seen for a decade as a result.

Not only is the shortage of components constraining production in countries such as the US and across Europe, labour shortages are also limiting production. However, a marked fall in business optimism in July hints that companies could become reticent to expand capacity while the pandemic continues to hit supply chains.

Suppliers' delivery times measured by the JPMorgan Global Manufacturing PMI, compiled by IHS Markit from its proprietary business surveys, lengthened at a rate unchanged on that seen in June, which had in turn been the most severe ever recorded since PMI data were available in 1998.

The supply delays contributed to a slowing of production growth during the month. Although remaining among the fastest recorded over the past decade, factory output growth edged down to the lowest since February.

Importantly, output growth continued to run behind growth of new orders for a fifth straight month, meaning backlogs of work rose sharply again. With the exception of last May, the latest rise in backlogs has not been exceeded since May 2004, underscoring how factories are struggling to meet demand.

With supply running behind demand, input cost inflation accelerated again as factories paid more for raw materials and components, with price increases often exacerbated by higher shipping rates. Although slightly below May's recent peak, the latest rise in input prices was the steepest since the global supply shock caused the Japanese earthquakes of 2010. 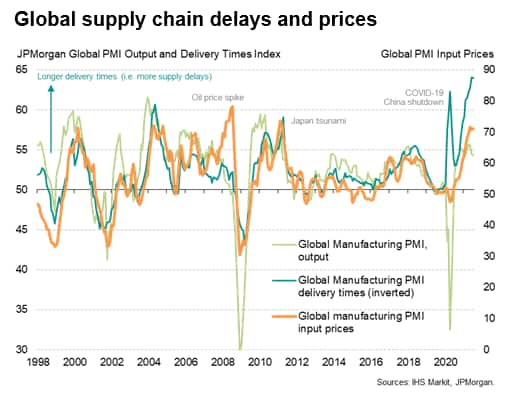 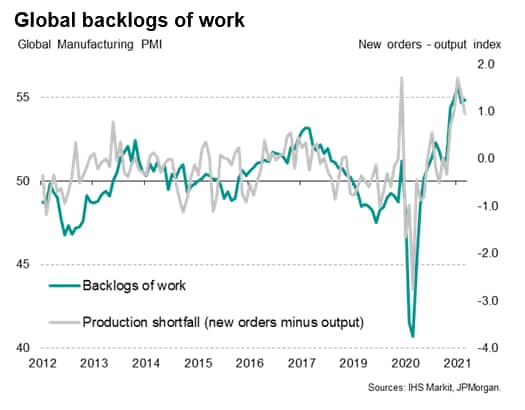 The worsening supply situation can in part be traced to the Delta variant, which has led to increased COVID-19 containment measures in many countries, notably in the Asia Pacific region. Production consequently fell sharply in economies such as Vietnam, Indonesia and Malaysia in July, with the Philippines and Thailand also seeing stronger rates of decline, whilst growth slowed closer to stalling in China and remained subdued in Japan and South Korea. 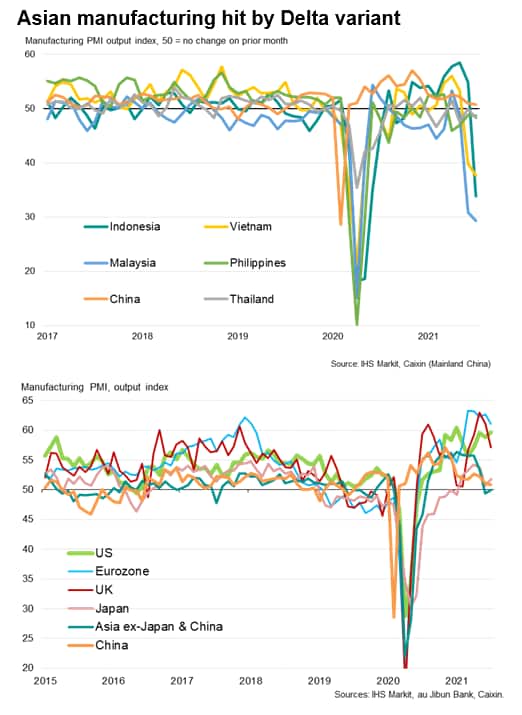 Production constraints were not confined to supply chain delays, however, with many manufacturers also reporting difficulties finding staff. Although global factory employment rose for a ninth month in a row, jobs growth once again lagged new orders growth with companies, notably in the US and UK, who recorded a fall in production during the month citing a lack of labour as a cause. 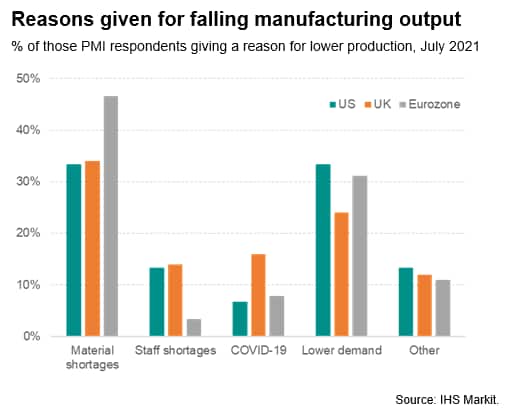 The July survey meanwhile also brought signs that manufacturers could become more reticent to hire staff on a permanent basis on coming months, despite current capacity shortfalls. Future output expectations - which act as a good lead indicator of hiring - fell worldwide in July to the lowest since last October, dented in particular by concerns over the lingering impact of the pandemic and supply constraints in particular.

The data therefore hint that manufacturers could see little incentive to take on more staff and expand production capacity if the additional workforce cannot be matched by an equivalent increase in raw material inputs. 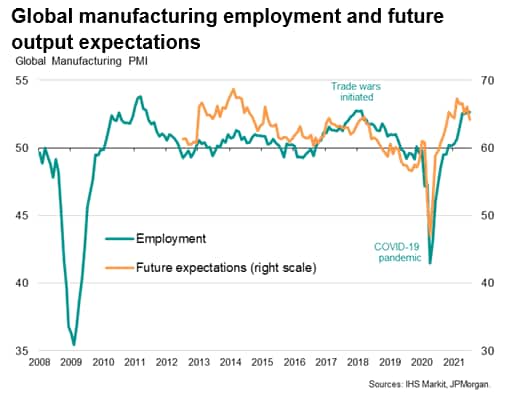