The pace of manufacturing output growth steadied in September after hitting the lowest for over a year in August, though was kept subdued by supply chain delays and labour shortages linked primarily to the pandemic. However, tentative signs of output reviving in parts of Asia that were hard hit by the COVID-19 Delta wave have been evident, and producers' expectations for growth over the coming year remain encouragingly positive, providing hints that underlying demand will support stronger output growth as bottlenecks ease.

Global manufacturing output growth picked up in September from the 14-month low witnessed in August. Although marginal, the improvement was notable in representing the first acceleration of output growth since April to hint at a possible halting or pausing of the recent slowdown. 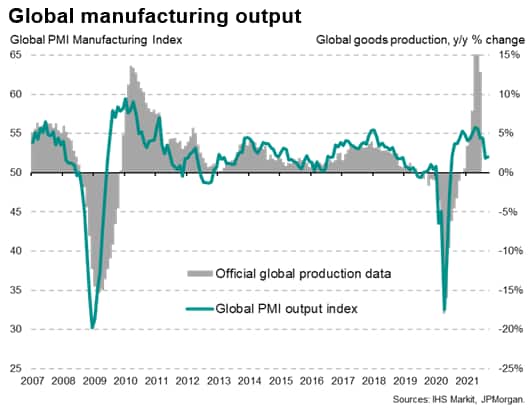 However, the rate of expansion remained below the average seen in the decade leading up to the pandemic, underscoring the ongoing pressures being felt by producers. In particular, suppliers' delivery times continued to lengthen globally at a rate unprecedented over almost a quarter of a century of survey history outside of the prior three months, albeit with the rate of deterioration easing slightly during the month. 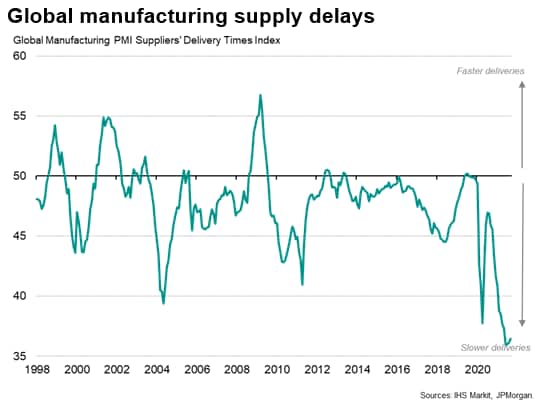 Some firms, notably in the US and the UK, also report output to have been constrained by a lack of labour. Output growth consequently slowed in the US, Canada, Eurozone and the UK, with firms often explicitly citing shortages as the principal or contributing factor to lower production. Globally, the number of firms reporting that production has fallen due to supply chain delays or labour shortages is running at over three times the long run average; a proportion greatly exceeding anything seen before the pandemic. 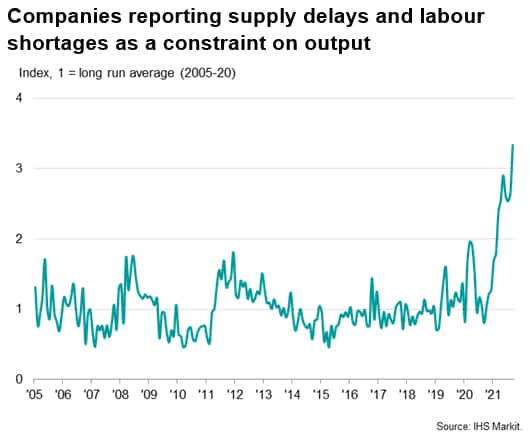 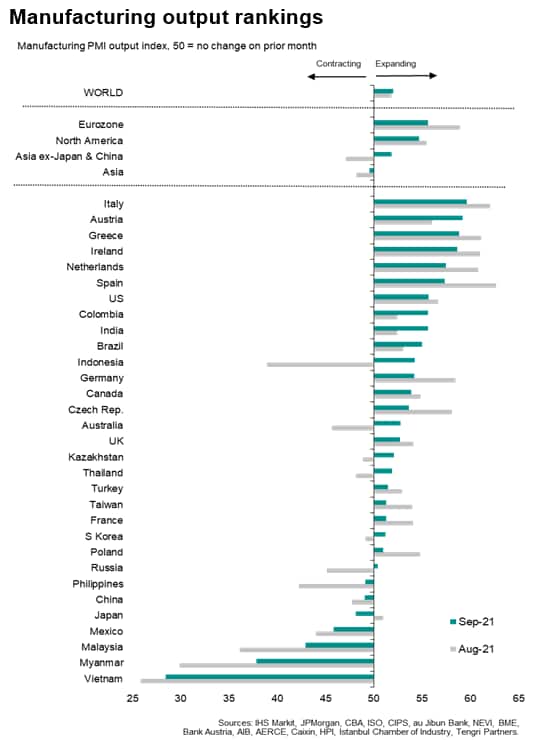 Asian manufacturing: less of a drag

There are signs, however, that some pressure from the supply-side constraints may soon start to ease. COVID-19 case numbers are falling globally after a third wave, caused primarily by the Delta variant, which appeared to have peaked in late August. 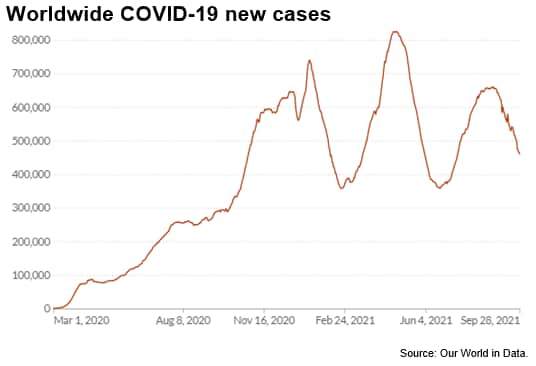 This easing in case numbers has allowed some key economies - notably those with low vaccination rates - to relax some onerous pandemic-fighting restrictions, which in turn allowed economic activity to rebound, or at least deteriorate less steeply.

Most notably, manufacturing output growth in Asia excluding China and Japan returned to growth for the first time in four months in September, led by a sharp rebound in activity in Indonesia and marked moderations in rates of contraction in the Philippines, Malaysia and Thailand, and more modest easings in Vietnam and South Korea. Production also fell at a reduced rate in mainland China with a return to growth in Australia adding to a brightening picture across the APAC region. 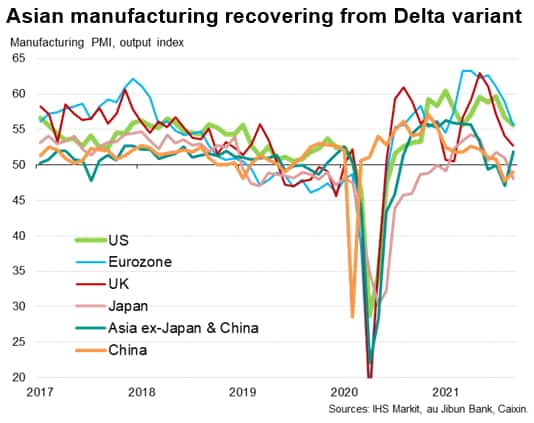 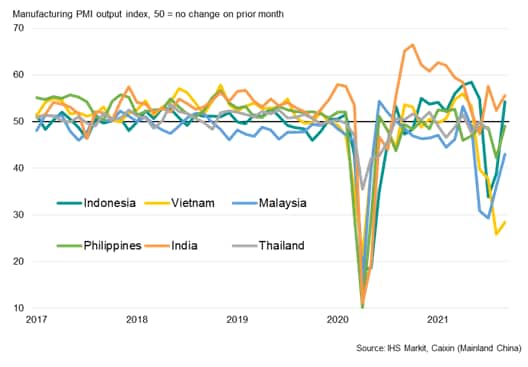 What remains unclear from the available economic data so far, however, is the extent to which underlying demand has remained resilient. While shortages have meant global backlogs of uncompleted orders have risen at unparalleled rates in recent months, with another new survey high seen in September, new order inflows have weakened considerably. New orders rose globally at the slowest rate for a year in August, with the rate of increase picking up only very modestly in September.

Some of this slowdown in demand is due to the shortages - auto producers, for example, faced with a lack of semiconductors are cutting production and hence also buying fewer other components. However, some of the demand slowdown will inevitably reflect a cooling of demand after the initial surge seen in the second quarter as economies reopened, and some of the slowdown will be linked to the switching of consumer spending from goods to services as economies reopen. 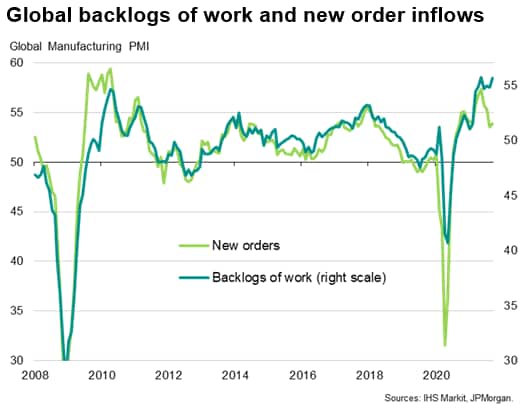 Quantifying the impact of these various factors on demand remains difficult, but some encouragement can be gleaned from manufacturers' expectations about growth in the year ahead, which remains elevated by historical standards (broadly in line with the level of optimism seen globally just prior to the trade war escalation in 2018). Such solid optimism suggested that companies are expecting demand to remain firm in the coming 12 months, allowing production to accelerate again once supply conditions improve. 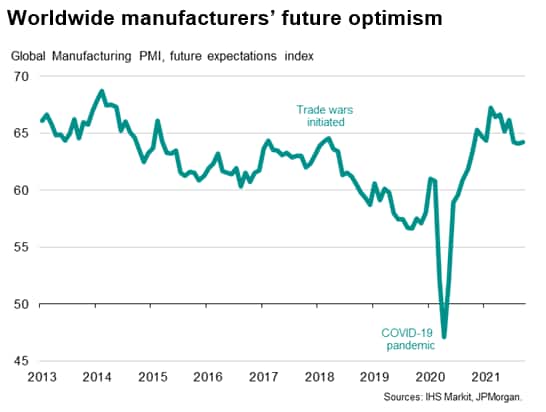