PMI survey data show global manufacturing managed only a modest rebound in April, meaning the second quarter has started with a rate of expansion considerably weaker than seen at the start of the year. Regional variations are marked, however, with the US overtaking the eurozone, but with US producers also seeing a marked upturn in price pressures. Global trade flows have meanwhile slipped to the lowest for one-and-a-half years, with emerging Asia's exports back in decline.

The headline JPMorgan Global Manufacturing PMI, compiled by IHS Markit, edged up from 53.3 in March to 53.5 in April. The latest reading failed to regain the peaks seen earlier in the year, but remained at a level consistent with global factory output rising at a solid annual rate of approximately 4% (at market exchange rates). 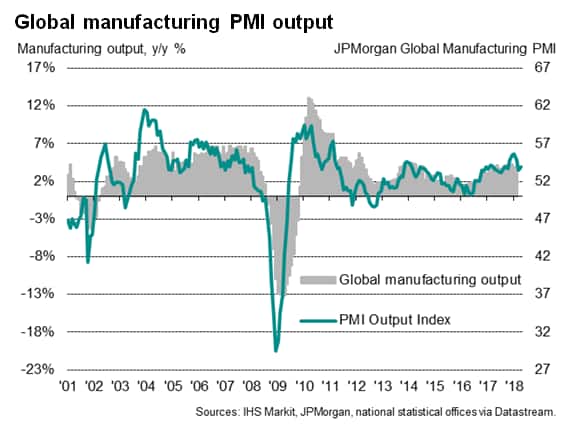 Both output and new orders growth rates rebounded slightly, in part reflecting improvements after adverse weather affected many countries in March, but remained well below peaks seen at the turn of the year. With employment growth meanwhile unchanged on March's six-month low, the survey indices collectively indicate that the global manufacturing cycle may have peaked.

The major change in April related to the regional breakdown. While manufacturing growth continued to slow in the eurozone and UK, down to 13- and 17-month lows respectively, growth accelerated to a 43-month high in the US, surpassing the euro area for the first time since November 2016.

A cluster of countries around Germany nevertheless continued to record the strongest manufacturing growth of all individual countries covered by the PMI surveys, led by the Netherlands. 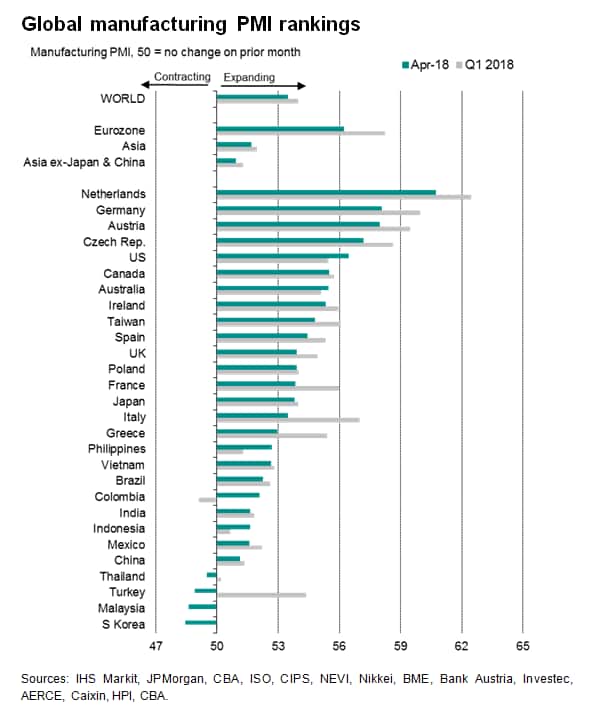 The survey also brought worrying signs in relation to trade flows, with global export growth slipping to its weakest for one-and-a-half years. At the same time, future expectations - the only sentiment-based PMI indicator - dropping to a four-month low, the latter often linked to worries about tariffs and trade wars.

Exports were especially subdued in Asia. China's goods exports showed the worst performance of the major world economies, with orders declining for the first time since November 2016. Exports from Asia excluding China and Japan also fell for the first time since late-2016, led by falling orders in South Korea, Malaysia and Indonesia. Japan's export growth also slowed to near-stagnation, down sharply to a 20-month low from a near eight-year high at the start of the year.

While the eurozone continued to enjoy the fastest export order growth, followed by the UK, both have also seen rates of increase slow markedly so far this year. US export orders meanwhile rose at a slightly quicker pace, but from a low base, with only modest sales growth still indicated by the IHS Markit PMI. 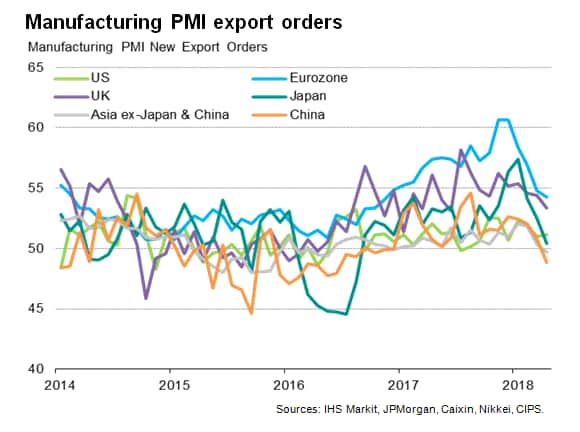 Selling prices pick up, notably in the US

Another key development in April was the upturn in global factory gate prices. The latest increase in charges was one of the highest seen over the past seven years.

Input costs meanwhile continued to rise at a solid pace, often linked to supply shortages. Suppliers' delivery times, a key indicator of whether pricing power has moved to either sellers or buyers, showed the highest incidence of supply chain delays for seven years, a development which often leads to suppliers being able to hike their prices.

Most notable has been the acceleration of selling price and input cost inflation in the US, with prices and costs rising at the highest rates since the first half of 2011. Furthermore, while supply chain delays remained most commonly reported in the eurozone, the incidence of delays has also risen sharply to a four-year high in the US, highlighting the build-up of sellers' pricing power. 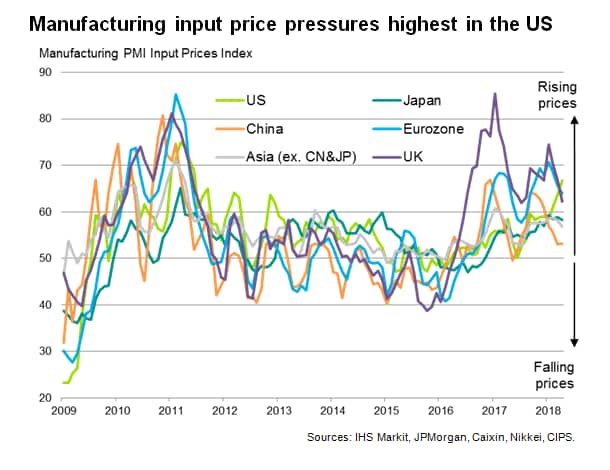