Global manufacturing growth was unchanged from October's 23-month low in November. Exports fell for a third month in a row and the number of countries reporting a deterioration of business conditions rose to the highest since 2016. 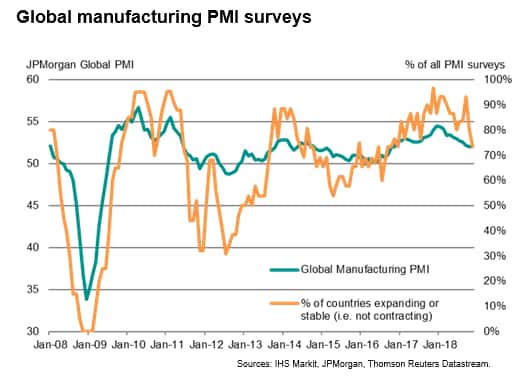 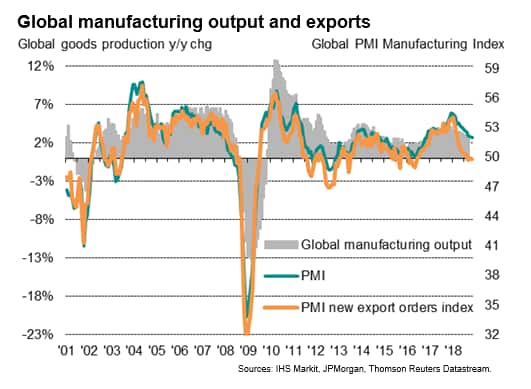 In a sign that growth may slow further, optimism about the year ahead meanwhile fell to the lowest for at least six years. Price pressures meanwhile cooled to the least marked for over a year, reflecting softer demand growth for commodities and the falling oil price.

The US stood out from other major economies by displaying greater resilience in terms of its recent manufacturing performance, though Vietnam reported the fastest rate of expansion. 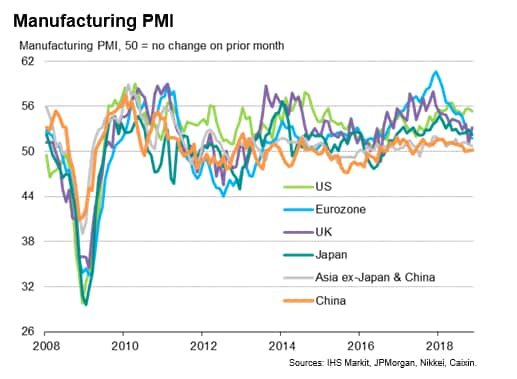 The JPMorgan Global Manufacturing PMI, compiled by IHS Markit, held steady at 52.0 in November, the October reading was the lowest since November 2016. Output growth remained close to October's 28-month low, indicative of worldwide goods production growing at a modest annual rate just above 2%.

New order growth also remained subdued, rising at a rate unchanged from October's 25-month low. Global export orders, a key bellwether of worldwide trade flows, declined for a third successive month. Although only marginal, the drop in exports represents a marked contrast to the six-and-a-half year high rate of increase seen at the end of last year and coincides with a period of growing global trade tensions, led by the US. 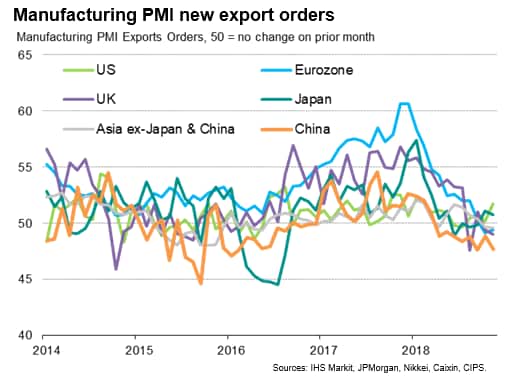 Backlogs of orders meanwhile showed the smallest increase since August 2016, rising only very modestly to suggest that, in general, current global manufacturing capacity was sufficient to cope with recent order book growth.

The rate of factory job creation slipped below the average seen so far this year, principally reflecting the reduced need to expand capacity in the face of weaker order book growth.

Fewer capacity constraints were also evident in supply chains. Although delivery times continued to lengthen on average, the incidence of delays was the lowest since August of last year, linked in part to November seeing the second-smallest rise in purchasing activity by manufacturers over the past two years.

Business expectations for the year ahead meanwhile slid to the lowest since comparable data were first available in mid-2012, reflecting concerns over trade tensions and tariffs, increasingly widespread political uncertainty and worries linked to global financial markets and rising interest rates.

The survey data also indicated that the recent cooler pace of manufacturing growth has been accompanied by weaker price pressures. Average manufacturing input prices registered the smallest monthly rise since August of last year, despite on-going reports of tariffs having driven up costs. Lower oil prices contributed to the slower growth of costs. Average global selling prices also rose at a reduced rate, showing the smallest monthly increase since July of last year.

Although the headline PMI held steady in November, the number of countries reporting a deterioration in business conditions rose to the highest since December 2016. Eight of the 30 countries surveyed reported a sub-50 PMI reading, with the worst performance seen in Turkey. By comparisons, this time last year only one country (Colombia) reported a deterioration of business conditions. 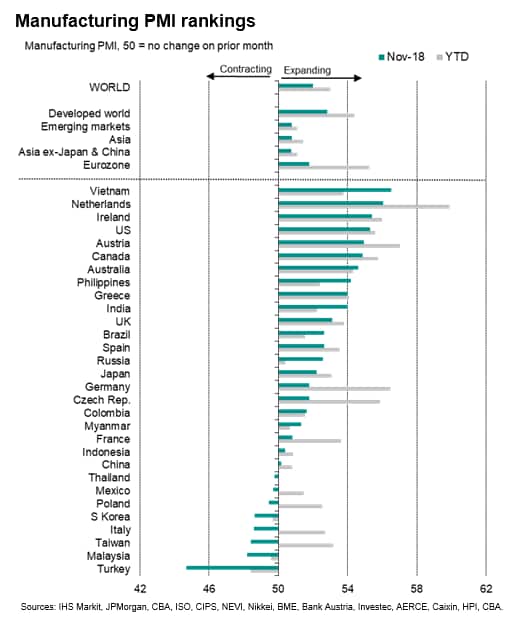 Vietnam rose to the top of the PMI rankings in November, followed by the Netherlands and Ireland. The US moved up into fourth place, having displayed more resilience in terms of factory growth than other major economies. The US has in fact seen factory growth accelerate in the latest three months, widening the gap with other major manufacturing economies. In contrast, weakening trends have been recorded in the eurozone, UK, China and Japan. 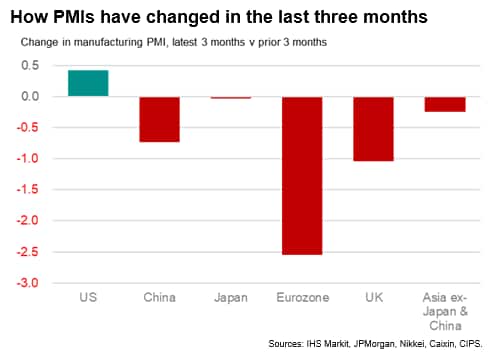