Global manufacturing output rose further in September as growth of new orders accelerated and exports reviving, pointing to a strong end to the third quarter as the world's factories continued to recover from COVID-19 related lockdowns. Job losses also eased to indicate a near steadying of factory payroll numbers as firms boosted capacity, with hiring also encouraged by a rise in future optimism to the highest since May 2018. Meanwhile demand often exceeded supply, driving global factory input prices higher.

The JPMorgan Global Manufacturing PMI, compiled by IHS Markit from its proprietary business surveys, rose from 51.8 in August to 52.3 in September, its highest since August 2018, buoyed by further production gains.

Notes: Due to later-than-usual release dates, September 2020 manufacturing PMI data for South Korea and Taiwan were not available for inclusion in the global figures.

Although the output index, which measures monthly changes in production volumes, dipped slightly from 53.6 to 53.5 in September, it remained firmly in expansion territory, broadly indicative of global factory output rising at an annual rate of 3.6%*, which contrasts markedly with the peak 17.7% rate of decline indicated back in April. To clarify, the index is not indicating that output is 3.6% higher than a year ago, but merely that production is now growing at a rate comparable to 3.6% per annum, representing a further recovery of the output lost during the pandemic.

*Since 2007, when IHS Markit's PMI data for the United States were first included in the index, the global PMI's output gauge has exhibited an 83% correlation with the annual rate of change of official production data, achieved with the PMI acting with a lead of three months. Importantly, the PMI is also published several months ahead of the comparable official data, underscoring how the PMI provides a very accurate advance guide to changing output trends.

An OLS regression can be used to determine what a PMI reading implies in terms of annual growth . The implied annual growth rate can be estimated as follows: 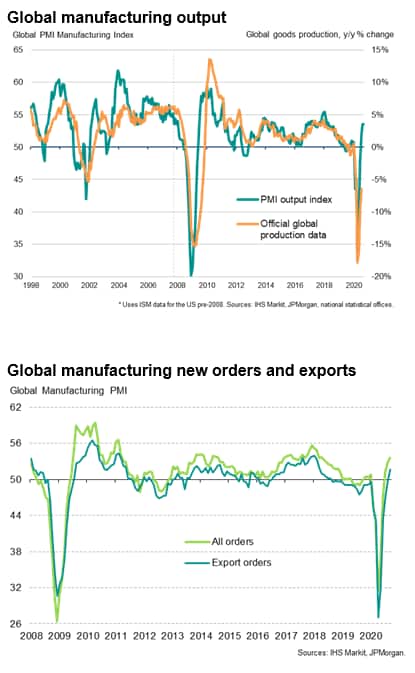 The slight cooling of production growth looks likely to be temporary, given an acceleration in growth of new orders during the month to the fastest since April 2018, which hints at strengthening demand for goods globally.

Especially encouraging was a further improvement in the global PMI's exports index, which indicated the return of global trade growth with the largest increase in worldwide export orders for two-and-a-half years. 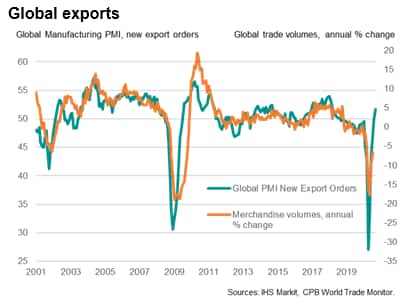 Inventories meanwhile fell during September, both in terms of finished goods and stocks of inputs. The decline in inventories was often unintentional, reflecting sales and production needs often outstripping expectations. The survey's new orders to inventory ratio - a guide to the extent to which production is likely to rise in coming months - consequently rose in September to its highest since December 2017. 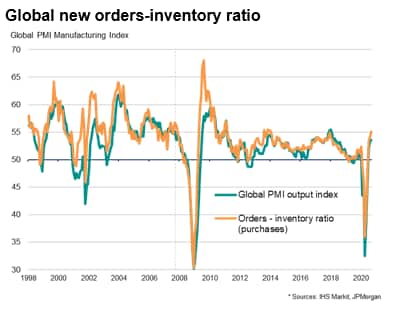 The survey also brought indications that output was in part constrained by shortages of inputs, with the incidence of supply chain delays rising compared to August. Although below the peak seen at the hight of the COVID-19 outbreak earlier in the year, when many factories (notably in China) closed, the lengthening of lead times highlights the extent to which demand continues to outstrip supply.

The imbalance of demand and supply led to further upward pressure on prices, with average input costs rising globally for a fourth successive month in September, rising at the steepest rate since December 2018 (albeit with the rate of increase well below the 2018 peaks). 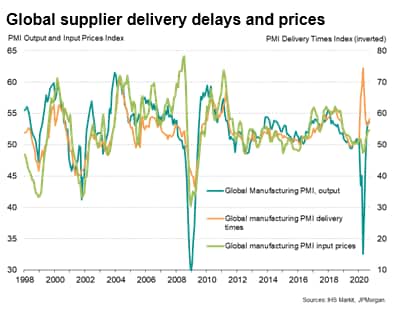 A further encouraging signal from the global PMI was provided by the Backlogs of Work Index, which tracks the volume of orders that firms have not yet completed or started to process. Rising levels of backlogs of work tend to result in companies taking on more staff to deal with the additional workloads and vice versa. Hence the Backlogs of Work Index provides an advance indication of labour market changes, acting with a one-month lead on the PMI's employment index, exhibiting a correlation of 89%.

In September, the backlogs of work index rose globally for the second successive month, indicating the largest rise in uncompleted orders for two years (excluding February's spike, which was caused by supply disruptions amid shutdowns in China). 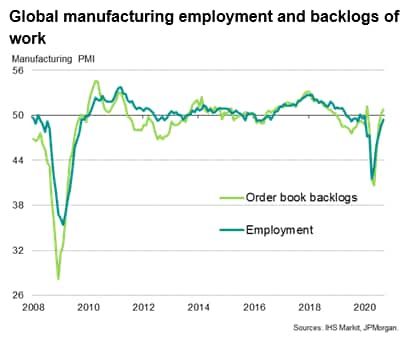 The September survey also saw manufacturers become increasingly positive about future prospects, with expectations of output over the coming year rising to the highest since May 2018.

The brighter outlook reflected expectations that global demand for many goods will continue to rise in coming months as life gradually returns to normal in increasing numbers of countries as the impact of the pandemic eases. However, worries persist about resurgent COVID-19 infection waves, the prospect of rising unemployment in many countries, as well as increased political uncertainty in the US ahead of the presidential election, all of which represent downside risks to the outlook. 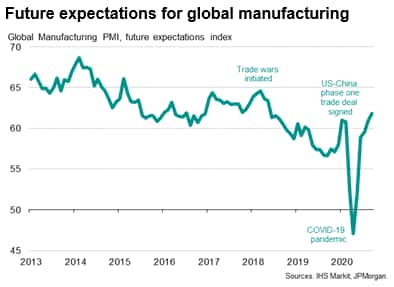