Global manufacturing growth fell to its weakest for over two years at the end of 2018 as the number of countries reporting deteriorating business conditions rose to one-in-three.

Weakened optimism about the year ahead and reduced growth of orders books meanwhile bode ill for output in coming months, and contributed to the weakest rate of job creation for over two years.

The JPMorgan Global Manufacturing PMI, compiled by IHS Markit, fell to a 27-month low of 51.5 in December, down from 52.0 in November. The survey is indicative of worldwide goods production growing at a modest annual rate of approximately 2%. 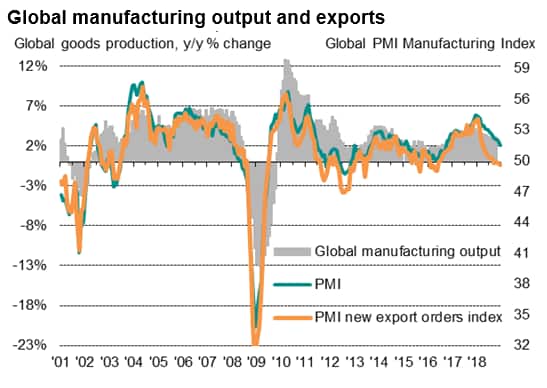 The PMI indicated a steady easing in the rate of expansion over the course of 2018 as trade war worries in particular subdued global trade. The December surveys showed global export orders falling for a fourth straight month, dropping at the fastest rate since May 2016. In contrast, exports had been growing at the fastest rate for almost seven years at the beginning of 2018.

The reduction in export orders contributed to a deterioration in overall order book growth to the lowest since August 2016, suggesting the rate of expansion of production could weaken further in January.

Companies have also scaled back their optimism for the year ahead, with business expectations down to the lowest since comparable data were first available in 2012.

Companies responded to the reduced growth of new work and gloomier outlook by taking a more cautious approach to hiring. Factory headcounts continued to increase in December, but to the smallest extent for 25 months.

Not only did the rate of global manufacturing expansion fade at the end of 2018, but the number of countries reporting deteriorating business conditions also increased. The number of countries either expanding or stable has fallen from 97% in late-2017 to just two-thirds in December 2018. 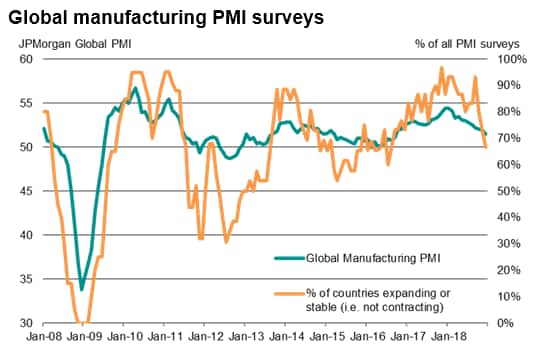 Ten of the 30 countries surveyed reported a sub-50 PMI reading in December. By comparison, in November 2017 only one country (Colombia) reported a deterioration of business conditions. 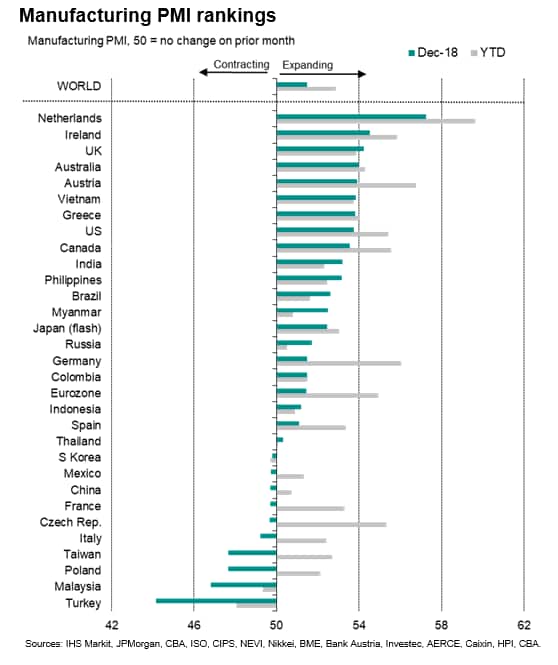 Growth remained resilient in a number of countries, with the Netherlands rising to the top of the PMI rankings, followed by Ireland and the UK. However, the UK - and most likely its close trading partners - benefitted from increased orders and stock building as increasing numbers of companies and their customers stepped up preparations for a potentially disruptive Brexit. 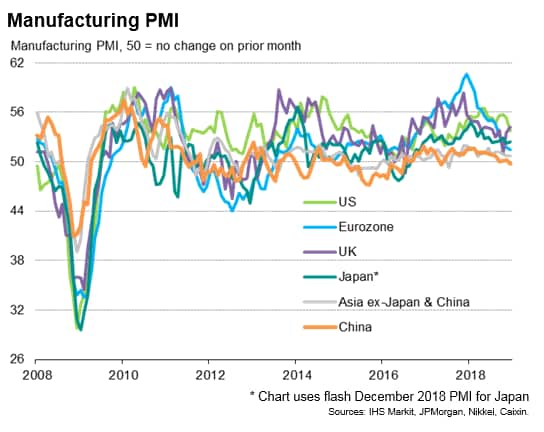 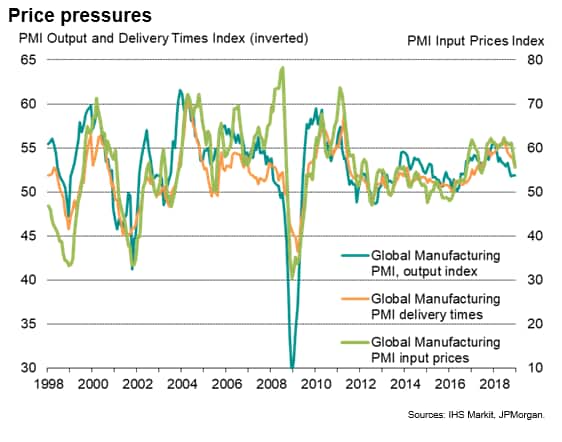 Selling prices fell across the emerging markets for the first time since January 2016 and rose in the developed world at the slowest pace since August 2017.