Global manufacturing collapsed at a rate not seen since the height of the global financial crisis in April as increasingly widespread measures taken to fight the COVID-19 pandemic led to factory closures, slumping demand and supply chain delays.

By country, only China saw any output growth, and even here the rise was muted due to falling demand, notably for exports. All other countries saw output trends deteriorate, with record rates of decline recorded in 26 of the 32 countries surveyed by IHS Markit. Excluding China, global output consequently fell to an extent exceeding that seen even during 2009. The JPMorgan Global Manufacturing PMI, compiled by IHS Markit from its business surveys in over 30 countries, slumped from 47.3 in March to 39.7 in April, its lowest since the height of the global financial crisis in March 2009. The PMI has signalled three successive months of deteriorating health of worldwide manufacturing, with April seeing a marked intensification of the decline amid the escalating COVID-19 pandemic. 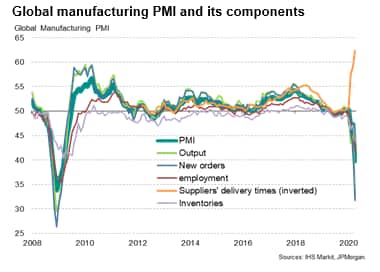 Suppliers' delivery times usually move in the same cycle as the other PMI components. In times of strong economic growth, more inputs are demanded by manufacturers to support higher production, putting pressure on suppliers whose lead-times then lengthen.

Conversely, at times of slumping demand, manufacturers buy fewer inputs meaning suppliers have more stock with which to service customers, and lead-times consequently tend to shorten. Such a scenario was clearly evident during the slump in demand seen during the global financial crisis.

However, the current situation is unusual, because demand has slumped but enforced factory closures due to the COVID-19 outbreak mean supplies of inputs are in short supply.

Rather than surging demand causing supply delays, we are seeing a supply shock. This shock has artificially boosted the PMI through the lengthening of lead-times. In reality, the supply shock has constrained production in many companies.

To get a better picture of the impact of COVID-19 on recent production and demand, we need to focus on the survey's output and new orders indices. Both fell to greater extents than the headline PMI, dropping 12.4 and 11.7 index points respectively during April compared with the 7.6 point drop in the PMI.

The declines pushed both the global output and new orders indices down to their lowest since January 2009. The survey's output index is historically consistent with global production falling at an annual rate in excess of 15%, though experience from the global financial crisis suggest that the actual decline could even be somewhat steeper than that indicated by the survey index. 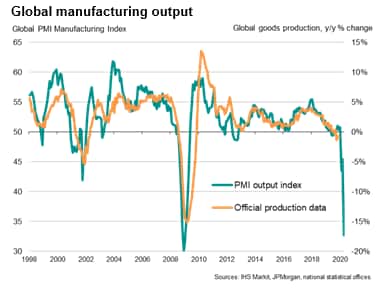 The slump in orders books has been in part a consequence of worldwide trade drying up amid the COVID-19 lockdowns. New export orders placed at manufacturers fell globally to a degree exceeding that seen even during the global financial crisis in April, indicative of global trade collapsing at an annualised rate of approximately 50% ( see our research note on global trade here). 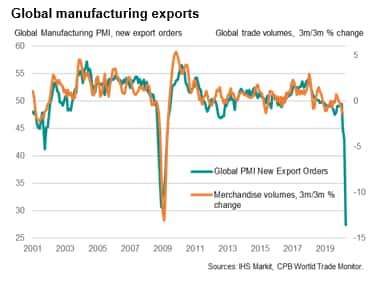 The latest survey data were collected between 7th and 24th April, a time when China continued to ease some of its restrictions on travel and company closures but most other parts of the world, notably Europe and the US, remained in lockdowns that had commenced in the second half of March. Consequently, of the 32 countries for which PMI data were collected, only China reported a PMI output index in excess of 50, signalling a month-on-month increase in production.

However, even the increase in China remained worryingly subdued, with both March and April having seen only very modest gains after a record decline in February. Weak production was linked to a further fall in new order inflows during April.

All other countries saw output fall at faster rates than March (though in the case of India, production fell after having risen in March reflecting a later lockdown than other countries).

The steepest decline was reported in the Philippines followed by India and then Italy.

Survey record rates of production decline were seen in all European countries, as well as in Turkey, Russia and Kazakhstan.

In the Americas, record falls were seen in Canada, Mexico, Brazil and Colombia, while in the US the decline was the steepest since 2009. 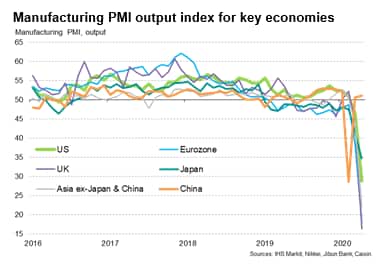 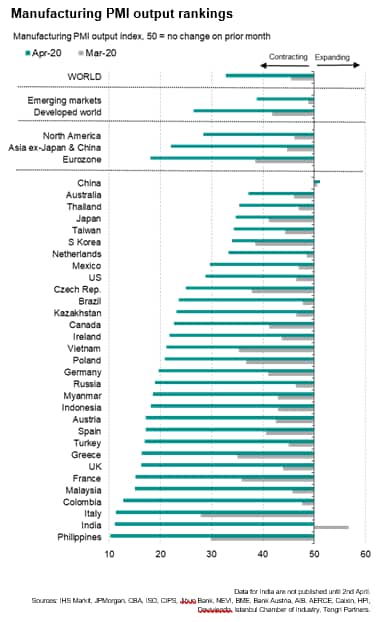 Looking further ahead, it is reasonable to expect a rebound in manufacturing, but questions remain as to how durable this rebound will be.

In the first instance, supply constraints should ease (notably from China) when more factories come back online from virus-related shutdowns, all of which will help boost production in the short term. In fact, judging by government announcements, it seems likely that April may prove to be the low-point for the initial impact from the pandemic on manufacturing, suggesting business conditions should start to improve from henceforth.

However, the concern is that global demand for manufacturers will remain well below that seen prior to the pandemic for some time. Both businesses and consumers are likely to remain cautious in relation to spending as uncertainty persists and unemployment spikes higher. There is therefore a strong possibility of growth fading again after an initial rebound.

Finally, as we look ahead to what the surveys may indicate for recoveries, it's worth keeping in mind that a PMI reading of 50 merely means no change on the prior month. Given the recent experience of China, we can expect many of the world's PMIs to move closer to 50 in the coming months. This may look v-shaped on a chart, but don't be misled.

A reading of 50 will in fact mean none of the lost output has been recouped. The PMI would need to rise commensurately higher than 50 to make up for an equivalent drop below 50 in the prior month. Index readings of 60, 70 and even 80 are needed to signal meaningful recoveries from the extensive declines seen recently and, given the glacial pace at which COVID-19 restrictions are likely to be eased, such readings cannot be reasonably expected any time soon.