Global manufacturing activity contracted marginally for a fifth successive month in September, according to the latest PMI surveys from IHS Markit, though the rate of decline moderated very slightly for a second consecutive month. The number of countries in decline also eased to a four-month low. But more worrying was a gloomy reading on firms' expectations about the year ahead and a further cut in factory headcounts. 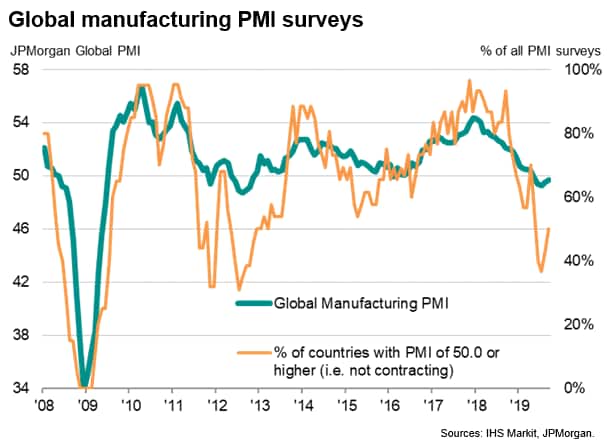 The JPMorgan Global Manufacturing PMI, compiled by IHS Markit from its proprietary business surveys in 30 markets, rose marginally from 49.5 in August to 49.7 in September, but remained below the 50.0 no-change level to signal a fifth straight month of deteriorating business conditions. The current downturn is the longest and deepest since 2012.

Although output was broadly stable for a second month, inflows of new orders fell for a fifth consecutive month, albeit dropping only marginally and less than that seen in the prior three months. A relatively steep decline was however seen for global export orders, which fell at the second-fastest rate since October 2012, with worldwide trade flows having now fallen for twelve straight months. That said, the latest decline in exports was slightly weaker than seen in August. 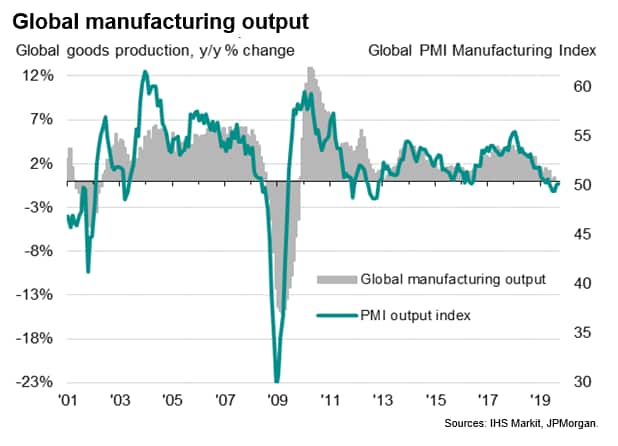 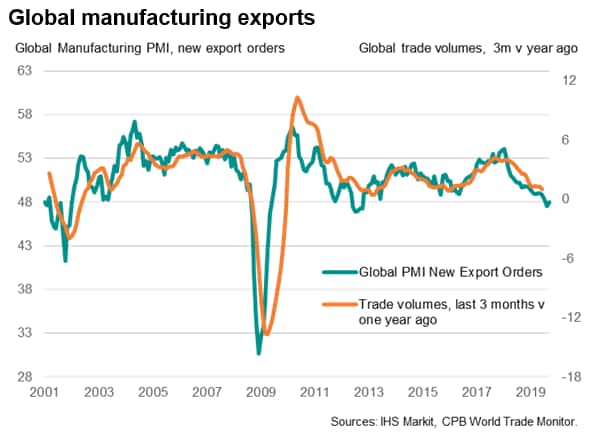 The paucity of new orders meant backlogs of work continued to decline, in turn leading to a fifth month of modest net job losses in the manufacturing sector as firms often sought to reduce excess capacity.

The lack of demand, combined with widespread uncertainty about the outlook and ongoing geopolitical concerns, also meant producers' expectations about their output in the year ahead remained firmly stuck at the record seven-year low seen in August.

The survey data indicate that sentiment - as measured by future expectations - has fallen further over the past year than the survey gauges of actual output and new orders, hinting that manufacturing sector growth will continue to weaken in coming months unless the business environment starts to improve. 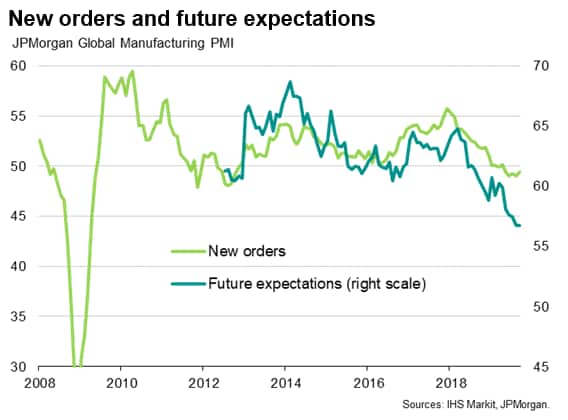 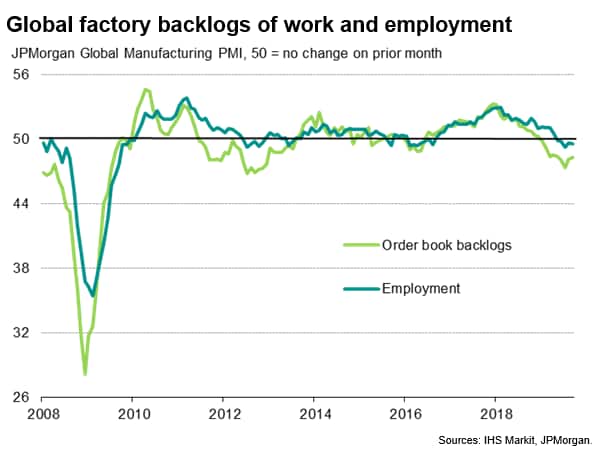 Higher oil prices contributed to an increased rate of inflation for manufacturers' input costs, though the rate of increase remained only very modest and well below the strong gains seen this time last year.

The weak price gauges in September rounded off a third quarter in which both costs and selling prices showed the weakest average readings since the first quarter of 2016. 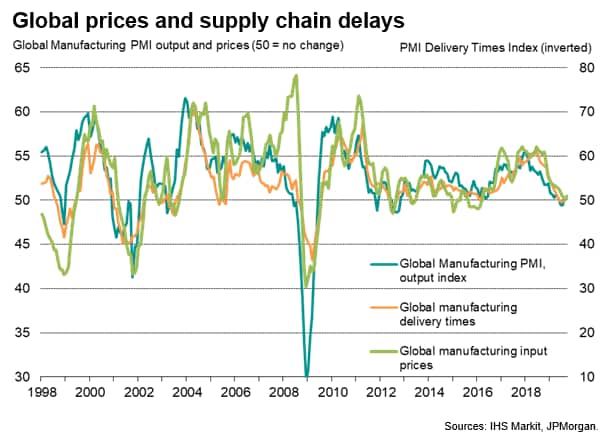 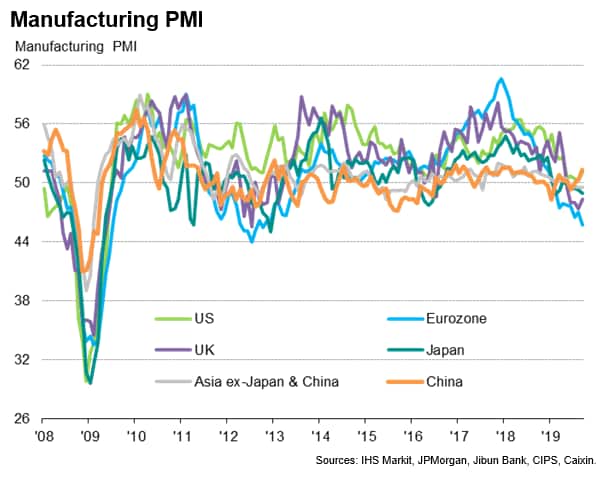 In addition to the headline PMI showing some signs of improvement, the number of countries (or markets) reporting manufacturing downturns (as given by a PMI below 50) eased from 17 to 14 (down further from 19 in July), falling to the lowest since May and now running at just under half of all countries surveyed. However, two other countries stagnated, and several others were close to stalling.

Germany again reported the steepest contraction of all countries, its PMI hitting the lowest since June 2009 and dragging the eurozone PMI to its lowest since October 2012. Other notable countries in decline included Japan, the United Kingdom, Russia, Mexico, Italy, Spain, Malaysia, South Korea and Indonesia.

A return to growth was seen in Canada while Turkey and Taiwan stabilised.

At the other end of the spectrum, the fastest expansion continued to be recorded in Greece, again followed by Brazil, Myanmar and the Philippines. Notably, China moved up into sixth place in the rankings while the United States moved up into eighth position, with both seeing improved rates of expansion. While the IHS-Markit compiled Caixin PMI for mainland China's PMI climbed to a 19-month high, a five-month high was seen for the US PMI. 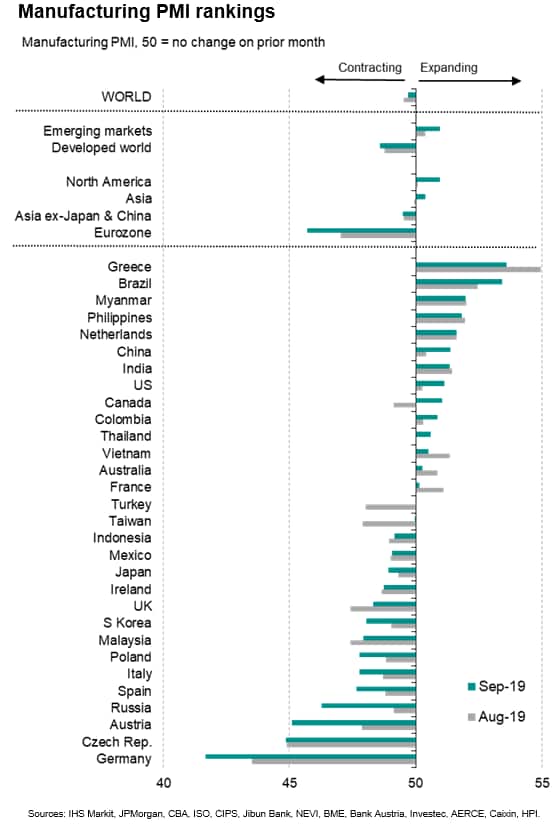