Global manufacturing activity contracted marginally for a sixth straight month in October, according to the latest PMI data from IHS Markit, albeit with the rate of decline moderating very slightly to hint that the recent downturn may have bottomed out back in July.

The JPMorgan Global Manufacturing PMI™, compiled by IHS Markit from surveys in over 40 markets, rose marginally from 49.7 in September to 49.8 in October, its highest since May. Although the PMI remained below the 50.0 no-change level to signal a sixth successive month of marginally deteriorating business conditions, meaning the current downturn is the longest and deepest since 2012, the rate of decline has now moderated for three consecutive months. 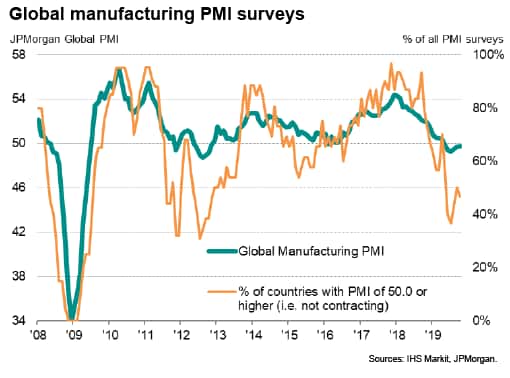 The output index - one of the five PMI components and a series that correlates highly with official manufacturing production data - showed an especially encouraging upturn, rising for a third month running to move further into positive territory, indicating the strongest (albeit still only marginal) rise in global factory output since April.

The output index has provided an accurate advance indication of official data, the latest numbers for which showed production falling into decline in year-on-year terms in August (-0.1%) for the first time since 2009, according to our calculations. However, the recent rise in the PMI indicates that this downturn should prove short-lived, assuming growth does not falter again in coming months. 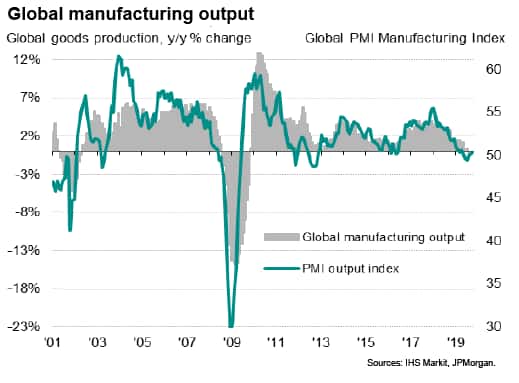 Further tentative good news came from the new orders index, which indicated a stabilisation of global demand for the first time in six months. The steadying of new order inflows was in turn partly linked to an easing in the rate of decline of global goods exports, which showed the smallest monthly decline since May.

The survey data nevertheless indicate that global exports have now fallen for 14 consecutive months, and the ongoing malaise represents the worst spell for worldwide trade since 2012. Companies have commonly attributed weakness in international demand to tariffs and trade war tensions, as well as signs of economic growth cooling in many key markets. 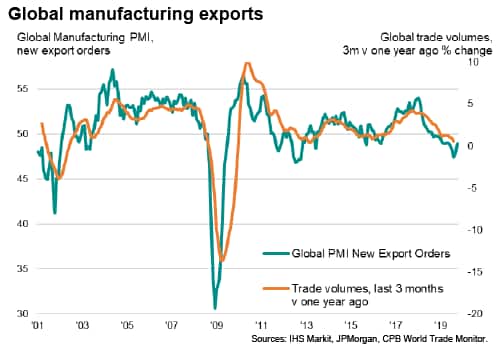 The signs of an easing in the current rate of decline of manufacturing was matched by an improvement in firms' expectations about the year ahead, which edged up to a four-month high. Although sentiment remains close to seven-year lows, reflecting widespread concerns over trade wars and slower economic growth, analysis of anecdotal evidence collected via the survey questionnaires suggests that trade tensions have moderated compared to a peak back in June, though worries about recession remain elevated. 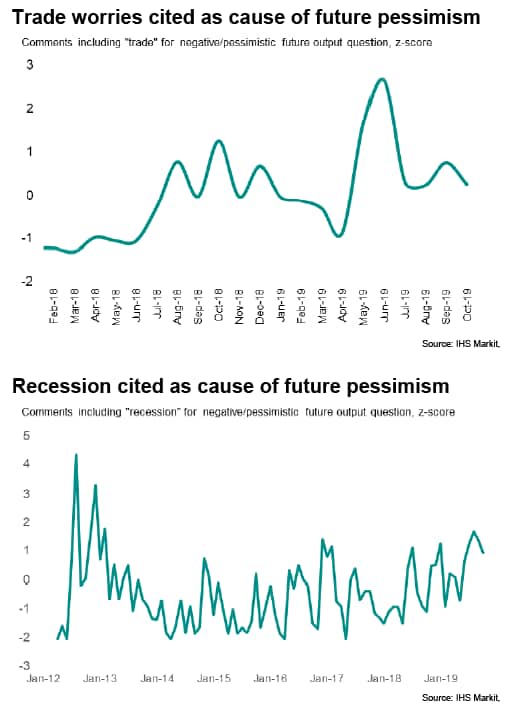 Not all survey indicators moved in the right direction, however, with jobs being lost in October at the joint-fastest rate since 2009. The ongoing lack of new order growth and still relatively gloomy prospects meant firms often continued to focus on keeping headcounts low for cost considerations.

However, with backlogs of work falling in October at the slowest rate since February, firms are likely to see less need to trim workforce numbers in coming months, barring a further slide in new order inflows. 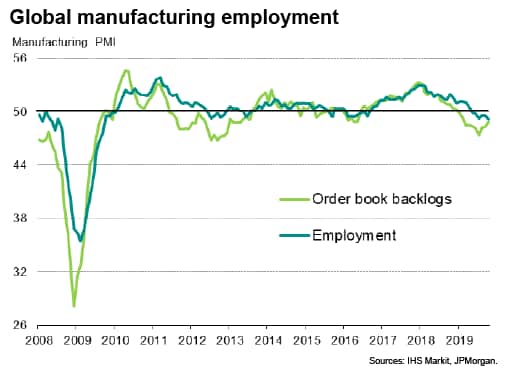 Manufacturing sector price pressures meanwhile eased during the month, largely in response to increased price competition among both manufacturers and their suppliers.

Producers' input costs rose only marginally, up by the second-smallest amount since input prices began rising back in April 2016, attributed to lower prices for many commodities as suppliers offered discounts to boost sales. The suppliers' delivery times index, a key gauge of supply chain price pressures and indicative of shifts from buyers' to sellers' markets, remained in broadly neutral territory, suggesting subdued pricing power. 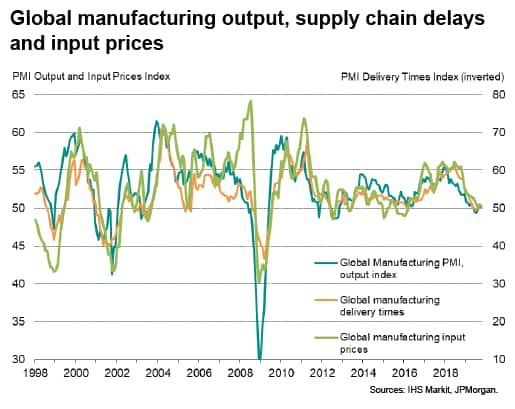 Greece and Germany top and tail the PMI rankings

Once again, Greece and Germany top and tailed the global growth rankings respectively in October. Germany has now sat at the foot of the rankings for seven of the past eight months, followed in October by a cluster of neighbouring countries comprising the Czech Republic, Austria and Poland.

Greece, conversely, has now led the rankings for four straight months. While Greece has been enjoying it best growth spurt since the global financial crisis in recent months, Germany has been suffering its steepest downturn.

A total of 14 countries reported a worsening of business conditions (as indicated by a PMI below 50) in October, which is down from a recent peak of 19 in July and representing just under half of all 30 economies covered by the IHS Markit manufacturing surveys. However, three other countries stagnated, leaving only 13 reporting expansions, and several of these were close to stalling.

Of the world's largest economies, the strongest expansions were reported by Brazil and China, followed closely by the US and Canada. Both the Eurozone and UK contracted, however, with the former showing a far steeper decline than the UK. However, the UK saw production boosted in some cases by short-term pre-Brexit stock building. Japan and Russia were other notable countries remaining in decline. 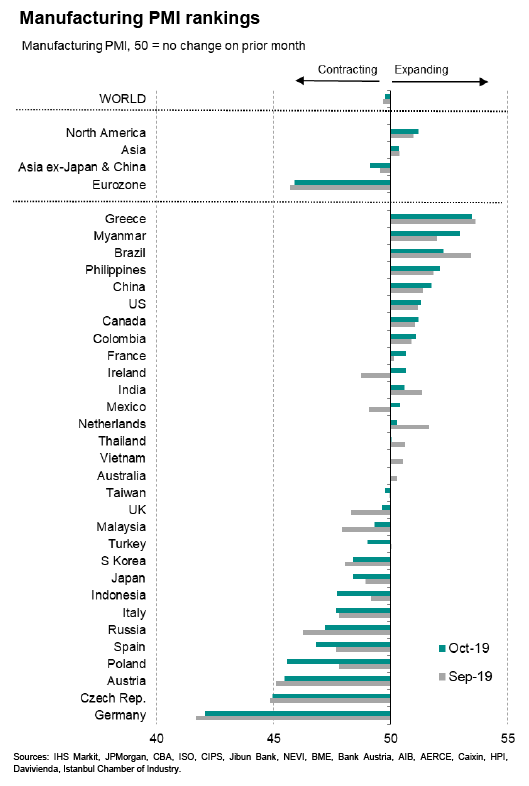