PMI surveys indicated a fourth successive monthly contraction of global manufacturing activity in August. New orders dropped at the joint-steepest rate in almost seven years, led by an increased rate of decline of exports, while business sentiment about the outlook also slipped to the lowest for over seven years. Job losses were again reported amid the ongoing gloom, and factory prices fell for the first time since early-2016.

Just over half of all countries reported a worsening of manufacturing conditions, led by Germany.

The JPMorgan Global Manufacturing PMI, compiled by IHS Markit, rose marginally from 49.3 in July to 49.5 in August, but remained below the 50.0 no-change level to thereby signal a fourth consecutive monthly deterioration of business conditions. The current downturn is the longest and deepest since 2012.

The number of countries in decline eased from 19 to 17 in August, but this still represents more than half of the total of 30 covered by IHS Markit's PMI surveys.

Although output stabilised after minor declines in June and July, other key indicators deteriorated to suggest the downturn is likely to persist into September.

First, inflows of new orders fell for a fourth consecutive month, dropping at the joint-fastest rate since September 2012.

Second, the rate of decline of global exports accelerated to the fastest since October 2012, with worldwide trade flows having now fallen for twelve straight months. 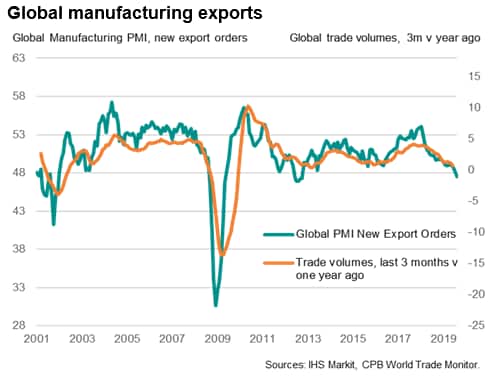 Third, producers' expectations about their output in the year ahead deteriorated sharply, dropping to a level well below anything seen in the prior seven-year history of this indicator. Fourth, the forward-looking orders to inventory ratio fell to its joint-lowest since September 2012, reflecting the drop in the new orders index and a concomitant rise in the stocks of finished goods index.

Fifth, the output index rose above that of new orders to an extent not exceeded for almost four years, suggesting that production will need to be adjusted down in coming months to avoid an unwanted build-up of unsold stock.

Similarly, backlogs of work fell for an eighth month in a row, reflecting the extent to which production growth exceeded that of new order inflows. 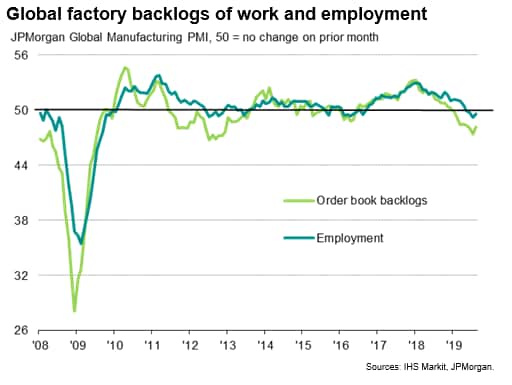 The lack of new work and falling backlogs of orders, as well as the further deterioration of business optimism, prompted a further worldwide cut in manufacturing payroll numbers, which fell for a fourth successive month in August. Although the rate of job losses eased slightly, such a sustained period of job cutting has not been seen since 2016.

Average selling prices meanwhile fell for the first time since March 2016 as producers increasingly sought to compete on price to drive sales, helped by the easing in cost pressures. 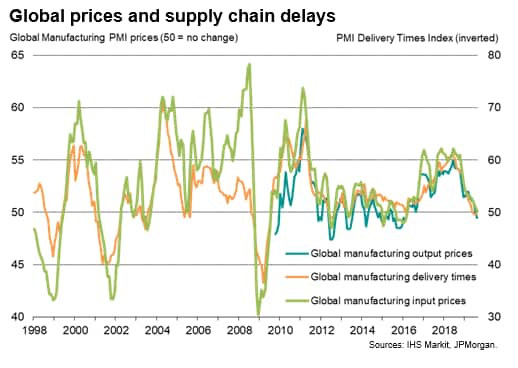 Majority of countries in downturns

Although the number of countries reporting manufacturing downturns (as given by a PMI below 50) eased from 19 to 17, this still represents more than half of the countries surveyed by IHS Markit. A notably steep downturn was again seen in the Eurozone, dragged down in particular by Germany, which reported the steepest contraction of all countries, followed by the Czech Republic and the UK. The latter saw Brexit woes exacerbate an export-led downturn. 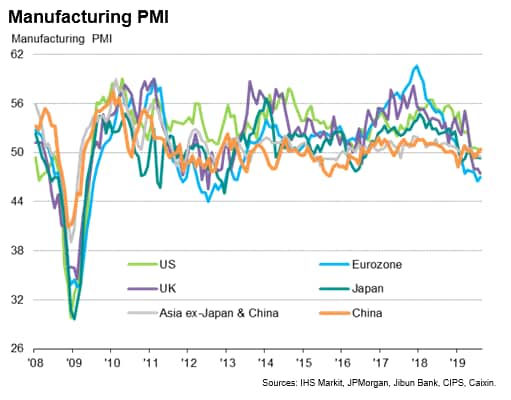 Other countries in decline include Japan, Canada, Mexico, Italy, Spain, Russia, Taiwan and South Korea. Only marginal improvement was meanwhile seen in the US, where the PMI fell to its lowest since 2009, though China was notable in returning to growth after two months of decline.1

At the other end of the rankings, the fastest expansion was recorded in Greece, followed by Brazil, Myanmar and the Philippines.

Seven of the 12 countries reporting manufacturing growth were emerging markets, propelling the overall emerging market manufacturing PMI to a modest three-month high of 50.4. In contrast, the developed world PMI remained in contraction territory for a fourth month, rising from 48.6 to 48.7 but still indicating the second-sharpest decline since October 2012. 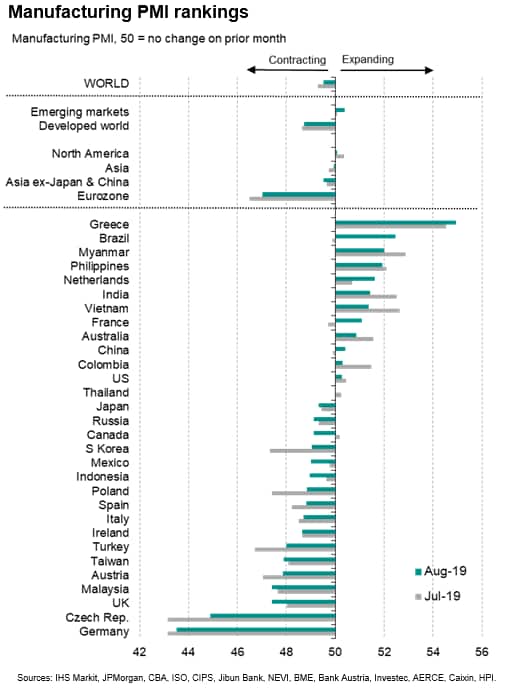 Looking at export performance in August, only eight of the 28 countries for which trade data are available reported a rise in exports (albeit up from just six in July). The Czech Republic reported the sharpest export loss followed by Germany, Taiwan and the UK. Greece reported the strongest export gain, followed by Vietnam and India. 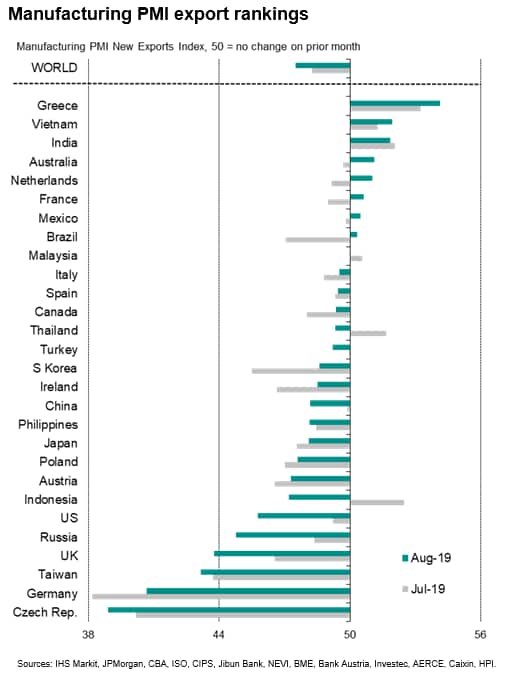 In terms of employment, the highest incidence of job cutting was recorded in Germany, followed by the Czech Republic and the UK. Greece, the Netherlands and Philippines reported the strongest rates of job creation.

The steepest drop in average selling prices was meanwhile recorded in Australia, followed by Taiwan, Ireland and China. The largest rise in output prices was seen in the UK.

1It should be noted that even the near-50 PMI reading seen in the US in fact translates into a contraction in the official measure of manufacturing output (see ourrecent US research noteand a recent analysis onwhat a PMI of 50 means for different countries).