Global manufacturing downturn eases in May, but only China enjoys growth

Global manufacturing output fell for a fourth successive months in May, albeit with the rate of decline easing compared to April. The past two months have nevertheless seen the steepest back-to-back drop in production since the first quarter of 2009.

While the further easing of lockdown measures should help producers around the world, weak global demand hints that recoveries could be frustratingly subdued in the months ahead.

Output drops substantially in May, but rate of decline slows

The output index from the JPMorgan Global Manufacturing PMI survey, compiled by IHS Markit from its proprietary business surveys, rose from 32.5 in March to 39.2 in May. By remaining well below 50, the index pointed to a further steep decline in production during the month. However, the higher index reading indicated a cooling in the rate of contraction to the slowest since March.

The average index reading over the past two months nevertheless hints that worldwide manufacturing output will fall steeply in the second quarter, dropping at a similar rate to that seen at the height of the global financial crisis in the opening months of 2009.

While April saw many major countries continue with COVID-19 lockdowns which commenced in March and led to many non-essential businesses closing temporarily, May saw some gradual reopening of factories as lockdown measures were eased, which has helped to moderate the overall rate of decline.

Supplier delivery delays also moderated to the lowest since February, allowing more firms to ensure sufficient quantities of inputs could be purchased to support production. 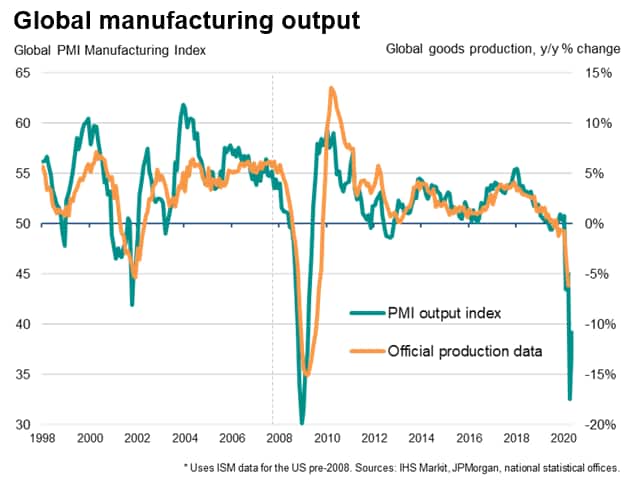 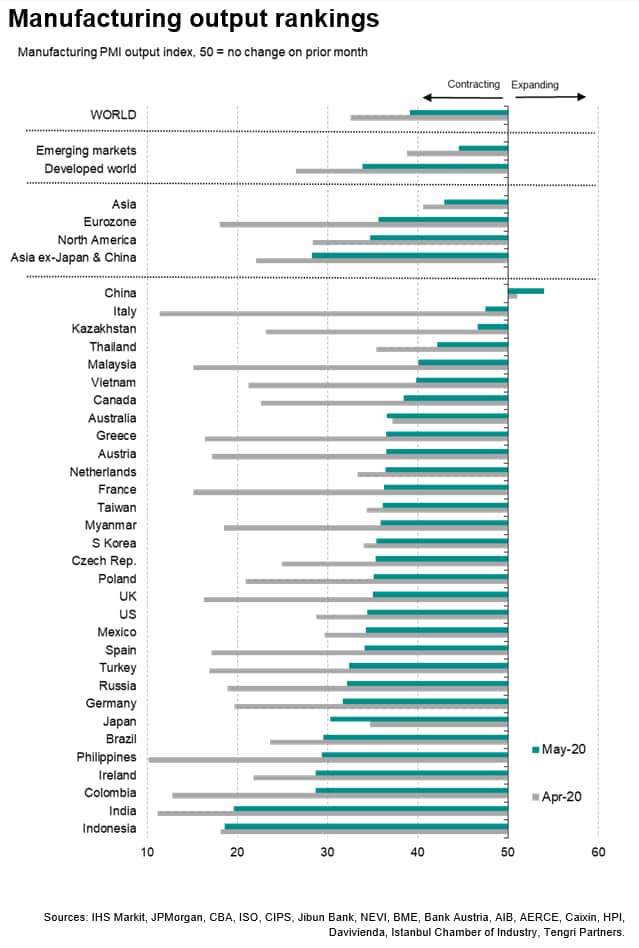 However, despite the rate of decline easing, the factory downturn remained broad-based. Of the 31 countries for which IHS Markit collects manufacturing PMI data, only China reported any output growth in May, although all bar Japan and Australia reported slower rates of contraction.

The outperformance of China is especially notable given its output gain in May was the steepest since January 2011, primarily reflecting more companies returning to fuller production after COVID-19 closures and domestic demand showing signs of stabilising.

Italy, which like China locked down relatively early, reported the softest drop in production. The steepest downturn was meanwhile recorded in Indonesia followed by India, the latter seeing a particularly aggressive lockdown during the month of May.

A comparison of PMI output data against IHS Markit's COVID-19 containment index (which uses a score of 0-100 to gauge the degree of lockdown measures, with 0 being no restraints) highlights how PMI scores have generally been related to degrees of lockdown. 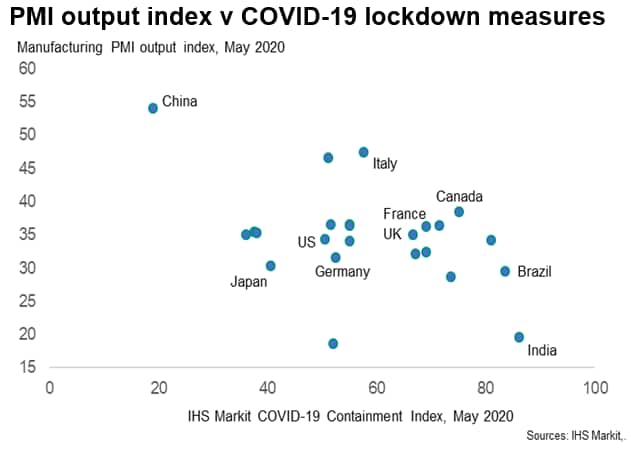 Looking at non-seasonally adjusted data we can gain an even clearer insight into month-on-month changes in COVID-19 impact. Here the performance of China is even more marked. The output index for China rebounded strongly from 18.0 in February to 61.5 in March as the lockdown was eased, averaging 55.7 in April and May. 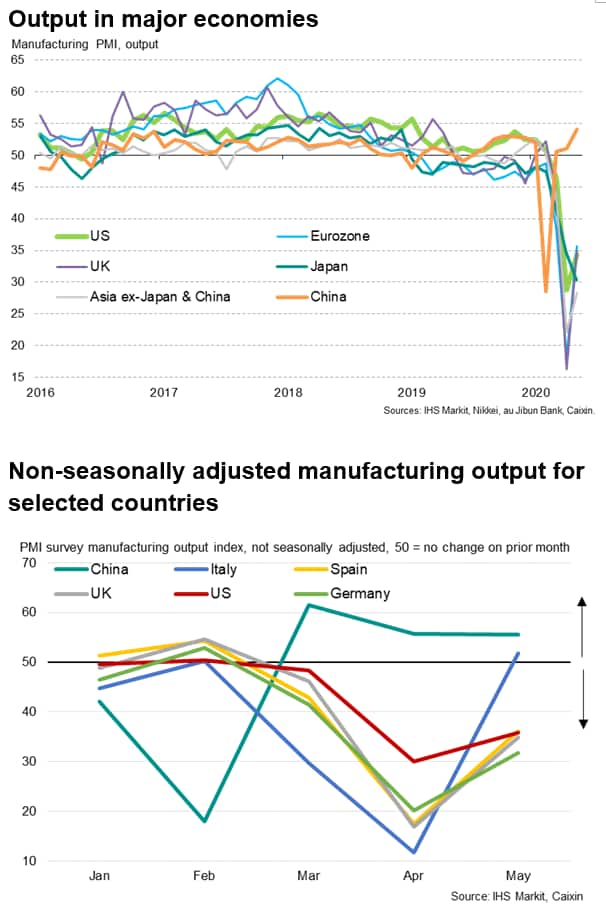 Similarly, Italy's non-seasonally adjusted output index rose from a record low of 11.8 in April to 51.8 in May, also signalling a return to growth before usual seasonal influences are taken into account, again reflecting Italy's earlier lifting of lockdown measures.

In contrast, the unadjusted output indices for countries such as the US, UK, Spain and Germany - where lockdowns continued to be more widely felt in May, have merely see rates of decline moderate, rather than a return to growth.

Recoveries stymied by lack of demand

The stronger data for China and Italy hint that PMIs for other countries will lift higher as lockdowns continue to ease and companies are able to restart their operations.

However, there is a concern that once production has shown an initial rebound due to factories reopening, the dominant factor driving production in future months will be demand, which is currently continuing to fall despite lockdowns easing.

The return to work at many factories was often countered by other companies reporting that the production trend had continued to deteriorate often due to a further weakening of order books. Inflows of new business fell globally for a fourth consecutive month in May, with the rate of decline easing compared with April but nonetheless the second-steepest since February 2009.

Global export orders showed an even sharper deterioration than overall order books, highlighting how weakened international trade flows continued to act as a severe drag on manufacturing activity, even in China, where the latest drop in new export orders was still among the steepest recorded since the height of the global financial crisis.

Barring April's record fall, only one month in the PMI survey history - December 2008 - has seen a steeper collapse in global exports than that registered in May. 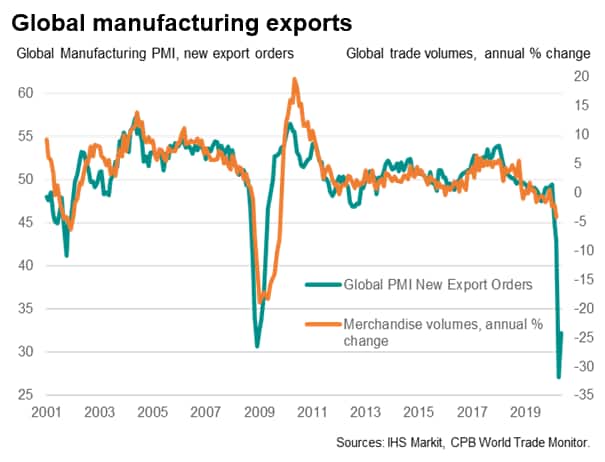 The further slump in orders from both domestic and export customers meant backlogs of work - a key gauge of the amount of work-in-hand at manufacturing companies - fell at an increased rate globally in May. The fall in backlogs was the sharpest recorded since April 2009 and highlights the extent to which excess capacity has built up at companies since the pandemic first struck, which is likely to limit production growth in coming months unless demand revives markedly. 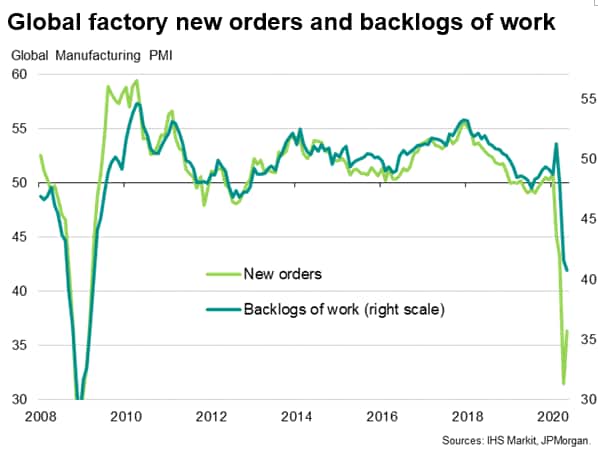 As a result, there were reports of widespread job losses as companies reduced operating capacity in line with lower production needs. Although softer than that seen in April, May's drop in employment was the second-quickest since June 2009. 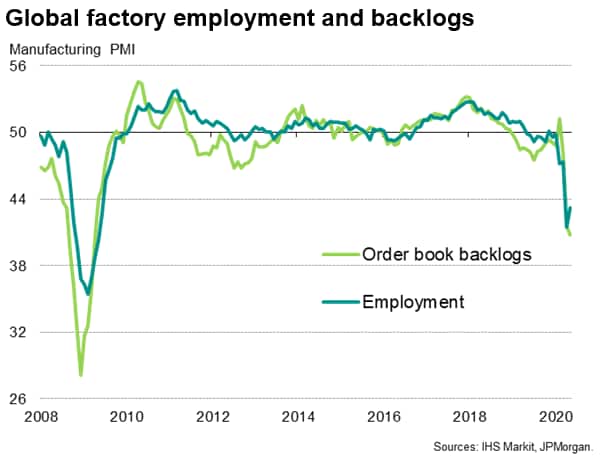 On a more positive note, the May survey did see a modest return to optimism for the year ahead, adding to evidence that the worst of the downturn is behind us. The number of optimists exceeded pessimists in May, with pessimists having been in the majority in April for the first time since comparable data were available in 2012. However, the overall degree of positive sentiment was weaker than at any time prior to the pandemic.