Worldwide PMI surveys indicated a deterioration of manufacturing business conditions for a second successive month in June, with the health of the sector declining at the fastest rate since October 2012.

Only 12 of the 30 countries covered by the IHS Markit surveys reported improved business conditions, the lowest number for over six years. Deteriorating business conditions were seen in the Eurozone, UK, China, Japan and the rest of Asia. The US meanwhile remained close to stagnant, the past two months registering the worst performance seen over the past decade. The headline JPMorgan Global Manufacturing PMI, compiled by IHS Markit, fell from 49.8 in May to 49.4 in June, its lowest since October 2012. The index signalled a second-successive monthly deterioration in business conditions, contrasting markedly with robust growth seen this time last year.

The survey's output index hit its lowest since October 2012, and is now indicating falling global production for the first time since 2012. Output was curbed as inflows of new orders fell for a second successive month, declining at the fastest pace since September 2012.

Weakening international trade again contributed to the drop in new orders. New exports orders fell for a tenth successive month, with the rate of decline accelerating to indicate the steepest drop in worldwide trade flows since September 2016.

Weaker than expected sales limited firms' efforts to run down their inventory holdings. The resulting new orders to inventory ratio (a key gauge of near-term production growth) consequently fell to its lowest since September 2012, indicating that risks are skewed toward the downturn gaining momentum in July. 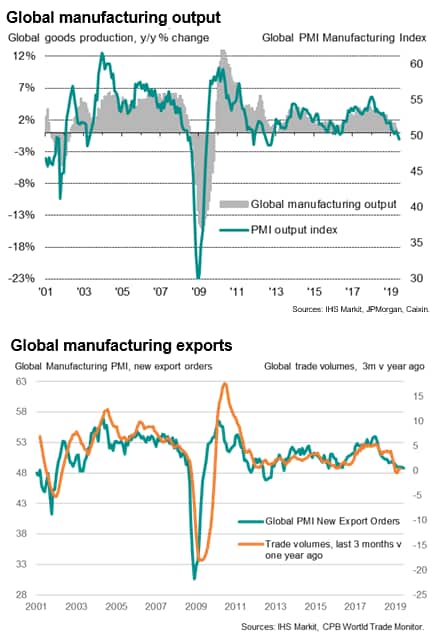 The drop in new orders meant firms increasingly ate into previously-placed orders to support production. Backlogs of work consequently fell at the fastest rate since December 2012, down for a sixth straight month.

Falling backlogs of work indicate the development of spare capacity in the manufacturing sector, which in turn promoted manufacturers to cut headcounts for a second consecutive month. Although only slight, the decline represented the first back-to-back cut to headcounts seen for three years.

The development of spare capacity was also indicated by the first (albeit marginal) shortening of average supplier lead-times for six years. The improvement contrasts markedly with this time last year, when supply delays hit a six-year high as suppliers struggled to meet demand. 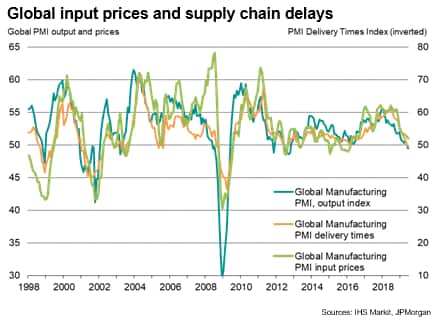 Of the major economies, the eurozone saw the steepest downturn, with the PMI below 50 for a fifth straight month and registering the second-steepest decline in business conditions for just over six years. Within the eurozone, the sharpest deterioration was again seen in Germany, which remained at the bottom of the global PMI rankings.

UK manufacturers likewise reported a marked downturn, with the PMI in contraction territory for a second month in a row and indicating the steepest downturn since early-2013. A boost from Brexit-related stock building seen earlier in the year moved into reverse, exacerbating underlying weak demand.

Both China and Japan meanwhile recorded modest deteriorations in manufacturing conditions, linked in both cases to falling exports. A slightly more marked decline was recorded in the rest of Asia, albeit with marked variations by country. Particularly strong expansions were seen in Myanmar and Vietnam, which topped the global PMI rankings in June, as well as India and the Philippines. In contrast, Taiwan, South Korea and - to a lesser extent - Malaysia all reported steeply deteriorating manufacturing conditions during the month. 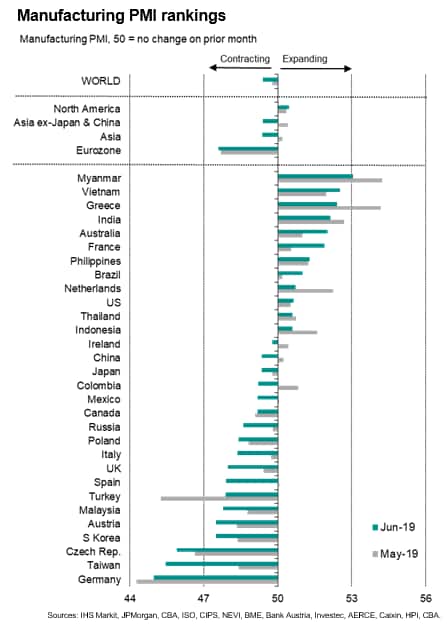 In all, only 12 of the 30 countries covered by IHS Markit's PMI surveys reported an improvement in manufacturing conditions in May, down from 17 in May and 21 in April, and was the lowest number since November 2012.

The largest country continuing to remain in expansion territory was the US, though even here the rate of improvement has slowed sharply to near-stagnation in the past two months, indicating the worst performance since the height of the global financial crisis in 2009.