Global business surveys indicated a marked upturn in hiring in April as companies boosted activity in line with resurgent demand for goods and services. As such, the data point to a substantial improvement in official labour market data in coming months.

Global PMI data, compiled on behalf of JPMorgan by IHS Markit from its proprietary business surveys of over 28,000 companies in more than 40 countries, recorded the largest influx of new business into businesses since April 2010 at the start of the second quarter. Service providers reported the steepest increase in new orders since June 2014 while manufacturers reported the biggest gain since May 2010.

Companies often struggled to cope with these inflows of new orders, lacking the capacity to supply customers on time. Supply chains lengthened to an extent not previously seen in over two decades of survey history as demand exceeded supply. Consequently, backlogs of orders grew at a rate not seen since August 2007.

At the same time, companies' expectations for growth in the year ahead has been running at elevated levels in recent months as economies continue to reopen from coronavirus restrictions. Optimism is running at levels rarely exceeded over the past decade.

This combination of surging demand, rising backlogs of work and optimism about the year ahead encouraged firms to take on extra staff, with April seeing the largest monthly rise in global employment since December 2007. 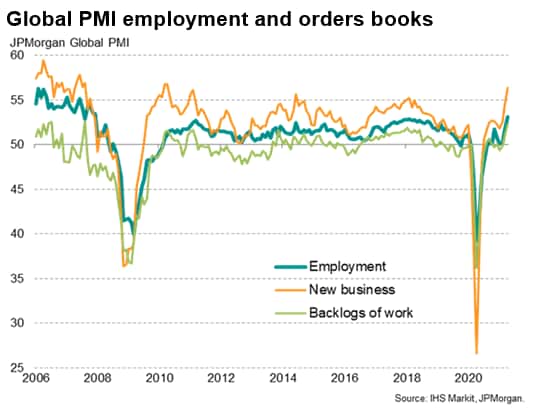 The upturn in employment was by no means universal, however, and heavily skewed towards the developed world. 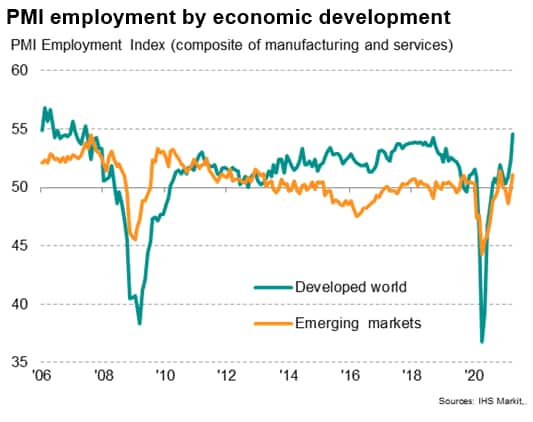 Among the major economies, the fastest rate of job creation was seen in the US, followed by the UK and eurozone, reflecting recent successes in controlling COVID-19 outbreaks and progress with vaccination programmes, especially in the US and UK.

In contrast, Brazil and India both reported lower employment levels during April, largely due to the further adverse economic impact from rising Covid case numbers and accompanying restrictions. 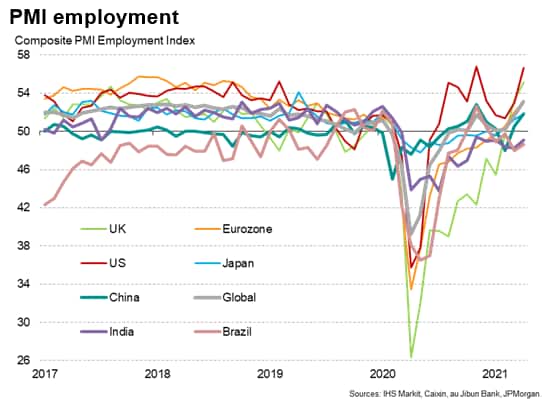 Certainly from a developed world perspective, the PMI numbers are encouraging. A strong correlation with historical labour market data suggests that the latest rise in the PMI survey employment index will soon translate into a marked fall in official unemployment (the PMI exhibits an 85% correlation with the annual change in unemployment, with the PMI acting with a lead of three months). 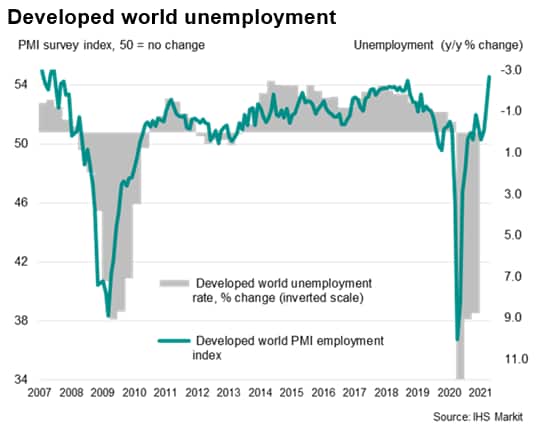 The worldwide job market improvement was driven by the service sector, which boosted payroll numbers to an extent not seen since 2007, though manufacturers also reported the largest payroll gain since February 2018.

Looking further into the sector detail, leading the upturn in April was the banking industry, which saw by far the largest monthly rise in employment ever recorded since comparable global data were available in 2009.

Only the tourism and recreation industry reported a decline in employment, and even here the monthly fall was smallest since the early days of the pandemic in February 2020. 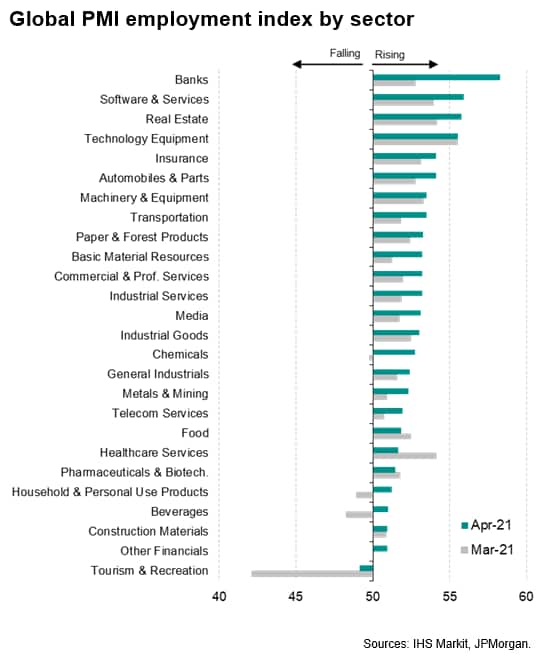