The pace of global economic growth slowed for a second successive month in December as further waves of coronavirus disease 2019 (COVID-19) infections curtailed activity and hit demand. Optimism about the year ahead also fell amid intensifying concerns over the spread of the virus, subduing employment growth. European economies were the hardest hit, but robust - albeit slower - expansions continued to be recorded in the US, China, India and Brazil.

Worse may be yet to come, however, as virus-fighting restrictions look set to tighten further in the coming weeks, reinforcing expectations of a slow start to 2021 for the global economy

The JPMorgan Global PMI™ (compiled by IHS Markit with data collected 4th-21st December) edged down from 53.1 in November to 52.7 in December, its lowest since September. 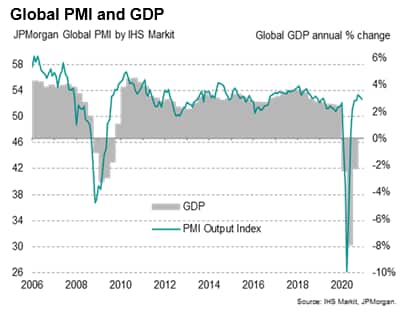 The decline indicates that the pace of global economic growth slowed for a second month running, as rising COVID-19 cases dampened activity and demand, though output is still indicated to have risen over the fourth quarter as a whole, further recovering from the unprecedented downturn seen in the first half of 2020.

Global service sector growth again suffered amid new lockdown measures in many markets, led by further steep falls in tourism, recreation and transportation services. Although the service sector as a whole continued to expand, the rate of increase was the weakest since September, with inflows of new business rising at the slowest pace since August.

Manufacturing meanwhile showed encouraging resilience in the face of rising COVID-19 infections, with global output growth easing only slightly from the near-decade high seen in November. The strength of the recent manufacturing expansion led to supply chain constraints, often linked to shipping shortages, which in turn limited production in some cases and accounting for at least some of the slowdown in overall manufacturing growth. 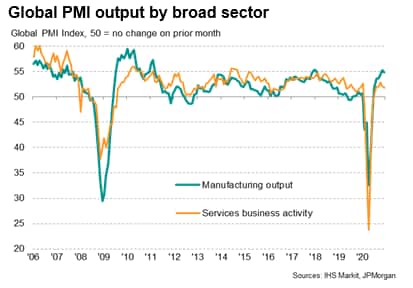 The outperformance of manufacturing relative to services was further highlighted by the global PMI survey's export indices, which track cross border flows of goods and services. While global goods exports rose for a fourth month running, rounding off the best quarter since the opening months of 2018 (despite some slowdown due mainly to shipping delays), the service sector saw exports fall for a seventeenth successive month, with the rate of decline accelerating to the fastest since July, albeit far less severe than the downturn seen earlier in 2020. Falling services exports principally reflected increasingly tight COVID-19 restrictions. 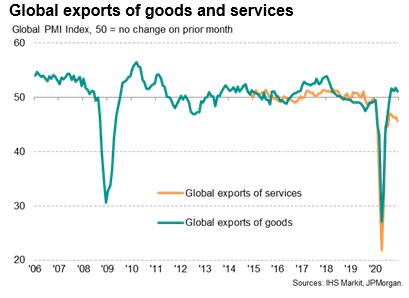 China and the US led the global expansion followed by India, mainly reflecting above-average service sector expansions in all three cases, albeit with rates of growth cooling versus November.

Italy reported the steepest downturn among the world's major economies, by some margin, amid sharply falling service sector activity. However, service sector output also fell in all other big-four euro member states, as well as in Japan, Russia and the UK.

Manufacturing expansions in the eurozone and the UK meant these economies remained broadly unchanged overall in December, but Japan and Russia were notable in remaining in contraction.

Business sentiment about prospects for the year ahead fell in December, principally reflecting rising concerns over further waves of COVID-19 infections in many countries and the prospect of tighter restrictions in the near-term. Optimism waned especially sharply in services, though remained far more buoyant than seen earlier in the year due to recent encouraging news of vaccine developments. 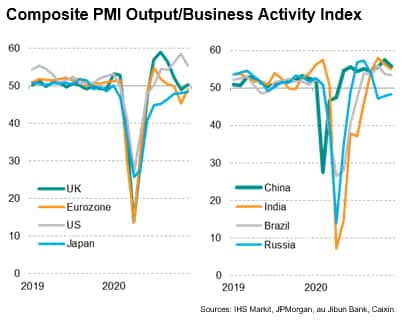 The dent to confidence, alongside new COVID-19 restrictions in some markets, nonetheless took its toll on hiring. Having hit a one-and-a-half year high in November, global employment growth fell close to stagnation in December, stalling in manufacturing and registering only a modest rise in the service sector. 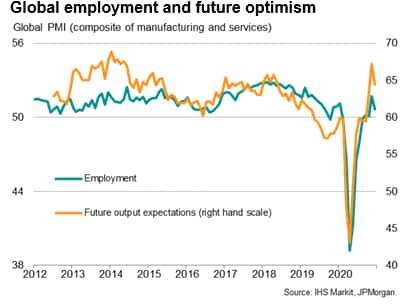 Among the major economies, only the US, China and Brazil reported any net increases in payroll numbers, and even here the rates of job creation slowed sharply. The steepest falls were seen in Russia, the UK, India and the eurozone. 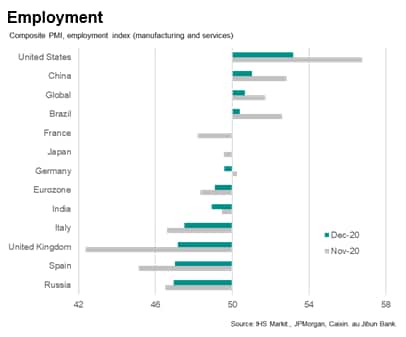 The slower expansion during December occurred alongside renewed measures implemented to fight further waves of virus infections in many countries. IHS Markit's COVID-19 Containment Index* has risen from 32 in September to 45 in December, though notably remains well below levels seen earlier in the year (during initial, tighter lockdowns, this index peaked at 64). The adverse impact on global GDP from the pandemic in the fourth quarter consequently looks considerably less severe than seen during the second quarter. Note, however, that with the PMI data having been collected between 4th-21st December, the latest survey likely failed to capture the full extent of the month's lockdown measures, which in many countries were tightened towards the end of the month.

Worse may also be yet to come, as the Global Containment Index is projected to rise to 46 in January. As such, the recent PMI data and renewed intensification of the COVID-19 restrictions adds weight to our forecast that the global economy will see a slow start to 2021 before the rollout of vaccines allows growth to accelerate in the second half of the year. 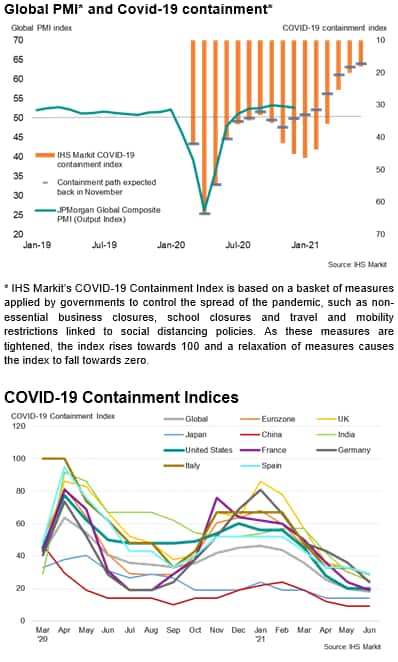